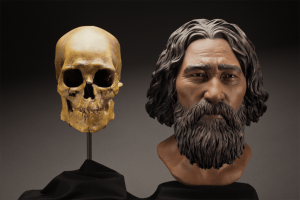 This clay facial reconstruction of Kennewick Man, carefully sculpted around the morphological features of his skull, suggests how he may have looked alive nearly 9,000 years ago. Brittney Tatchell, Smithsonian Institution

A mysterious set of 9,000-year-old bones, unearthed nearly 20 years ago in Washington, is finally going home. Following bitter disputes, five Native American groups in the Pacific Northwest have come together to facilitate the reburial of an individual they know as “Ancient One.” One of the most complete prehistoric human skeletons discovered in North America, “Kennewick Man” also became the most controversial.

Two teenagers searching out a better view of a Columbia River speedboat race in 1996 were the first to spot Kennewick Man’s remains. Since then, the bones have mostly been stored away from public view, carefully preserved in museum storerooms while subject to hotly contested legal battles.

Some anthropologists were eager to scientifically test the bones hoping for clues about who the first Americans were and where they came from. But many Native Americans hesitated to support this scientific scrutiny (including tests which permanently destroy or damage the original bone), arguing it was disrespectful to their ancient ancestor. They wanted him laid to rest. 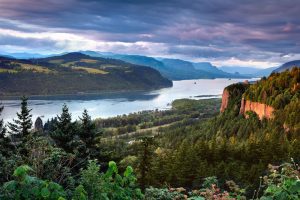 This high-profile discovery served as an important, if maddening, test case for a significant new law, the Native American Graves Protection and Repatriation Act (NAGPRA). It aimed to address the problematic history behind museum human remains collections. First it mandated inventories – many museums, in fact, were unaware how large their skeletal collections really were. Then, in certain cases, it called for returning skeletons and mummies to their closest descendant group. Since NAGPRA passed in 1990, the National Park Service estimates over 50,000 sets of human remains have been repatriated in the United States.

The legal framework fits well in cases where ancestry could be determined – think remains found on a specific 19th-century battlefield – but other instances became more contentious. Scientists sometimes argued that very old remains, including Kennewick Man, represented earlier migrations into the Americas by groups who might have moved on long ago. This point of view often clashed with indigenous perspectives, particularly beliefs that their ancestors have lived in specific places since the dawn of time.

Museums in the U.S. and Europe have collected and studied human remains for well over a century, with the practice gaining considerable momentum after the Civil War. Archaeologists, anatomists and a mishmash of amateurs – influenced by an array of emergent sciences and pseudosciences – gathered bones by the thousands, shipping them in boxes to museums in an effort to systematically study race and, gradually, human prehistory. 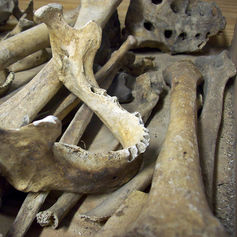 But building museum bone collections also represented major breaches in ethics surrounding traditional death and burial practices for many indigenous people across the Americas and around the world. For them, data gathering was simply not a priority. Instead, they sought to return their ancestors to the earth.

Considered in context, the concerns raised by many Native Americans are not particularly difficult to comprehend. For example, doing archival research for my book “Bone Rooms,” I learned of the case of several naturally mummified bodies discovered in the American Southwest in the 1870s. The dried corpses were paraded around San Francisco, before being exhibited for the public in Philadelphia and Chicago. Once the immense popularity of the exhibitions died down, the bodies were distributed to several museums across the country where they were put into storage.

Presenting human remains as purely scientific specimens and historical curiosities hurt living descendants by treating entire populations as scientific resources rather than human beings. And by focusing mainly on nonwhite groups, the practice reinforced in subtle and direct ways the scientific racism permeating the era. While some European American skeletons were collected by these museums for comparative purposes, their number was vastly outpaced by the number of Native American bodies collected during this same period.

Anthropologists and other scientists have worked to address some of these negative legacies. But the vestiges of past wrongdoings have left their mark on many museums across the country. Returning ancestral human remains, sacred artifacts and special objects considered to hold collective cultural value attempts to serve as partial redress for these problematic histories.

Inaccurate initial media reports muddled the Kennewick Man story. After the first anthropologist who looked at the skull proclaimed a resemblance to European Americans (specifically the actor Patrick Stewart), a New York Times headline in 1998 announced, “Old Skull Gets White Looks, Stirring Dispute.” Indeed, as the paper commented, the bogus reports leading people to believe Kennewick Man might be a white person “heightened an already bitter and muddled battle over the rights to Kennewick Man’s remains and his origins.”

Hidden away from public view, the prehistoric remains were anything but forgotten. Many indigenous people came to view Kennewick Man as a symbol for the failings of the new NAGPRA law. 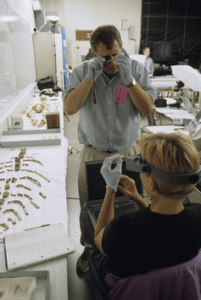 Forensic anthropologists at the National Museum of Natural History examined Kennewick Man during 16 days of study in 2005 and 2006. Chip Clark, Smithsonian Institution

Some scientists, on the other hand, made impassioned arguments that the bones did not fall under the purview of the new rules. Their extreme age meant the remains were unlikely to be a direct ancestor of any living group. Following this logic, several influential scientists argued the bones should therefore be available for scientific study. Indeed, extensive scientific tests were carried out on the skeleton.

Two years after his discovery, Kennewick Man moved to the behind-the-scenes bone rooms at the Burke Museum on the campus of the University of Washington in Seattle. The long tradition of gathering and interpreting human bones in museums made the decision seem almost natural. Still, it proved a highly problematic (and temporary) “solution” for many Native Americans who wanted the remains buried.

Last year, genetic testing finally proved something many people had suggested for some time: Kennewick Man is more closely related to Native Americans than any other living human group.

Should human remains – including the rare, ancient or abnormal bodies sometimes considered especially valuable for science – ever be made into scientific specimens without their approval or that of their descendants? If we do choose to collect and study them for science, who controls the knowledge drawn from these bodies?

These are big questions. I argue that the effort to scientize the dead brings about distinct and specific responsibilities unique to human remains collections. Careful consideration is necessary. Cultural and historical context simply cannot be ignored.

By some estimates, museums today house more than half a million individual Native American remains. Probably hundreds if not thousands of sets of skeletal remains will face these big questions in the coming decades.

Indicative of changing attitudes and ethical approaches to museum exhibition, recent calls to display Kennewick Man’s remains have largely been rebuked, despite potential for engaging large audiences. The prospect for new knowledge or effective popular education is tantalizing, but these objectives should never eclipse basic human and civil rights. 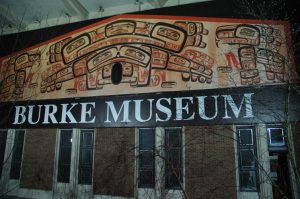 Museums across the country still have human remains in their bone rooms. Wonderlane

Two-and-a-half decades after NAGPRA, museums in the United States – including the American Museum of Natural History, Smithsonian Institution and the Cleveland Museum of Natural History – join the Burke Museum in continuing to maintain sizable human remains collections. Kennewick Man may be among the most high-profile cases of human remains going under the microscope – both in terms of the scientific study he was subject to and the intensity of the debate surrounding him – but he is certainly far from alone.

Skeletons wait patiently while the living attempt to work these problems out, but this patience is granted only because the bones have no other choice.