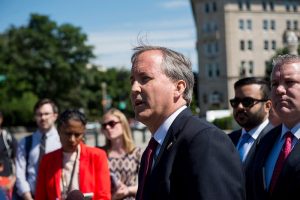 Texas Attorney General Ken Paxton holds a press conference on June 9, 2016 in front of the U.S. Supreme Court to discuss the filing of a lawsuit against the state of Delaware.

The highest criminal court in Texas said Wednesday it will not hear Ken Paxton‘s appeal of securities fraud charges, putting the attorney general on a path to facing a trial in the coming months.

“Today’s ruling marks an end to Mr. Paxton’s almost year-long attempt to avoid being judged by a jury of his peers,” Brian Wice, one of the special prosecutors handling Paxton’s case, said in a statement. “We look forward to going to trial and seeking justice on behalf of the people of Texas.”

The decision Wednesday was made by the Court of Criminal Appeals, which Paxton’s lawyers had asked to review the case as a last resort before trial. Without comment, the court announced it would not consider the appeal.

Paxton’s legal team responded that it plans to file a motion for rehearing before the court.

“The charges against Ken Paxton are without merit,” Paxton lawyer Philip Hilder said in a statement.

The decision makes the prospect of the state’s top lawyer sitting through a trial more likely than ever. The proceedings could start as early as next spring. If convicted, Paxton faces five to 99 years in prison.

Last summer, a Collin County grand jury indicted Paxton on criminal charges of securities fraud and failure to register with the state securities board. He is accused of misleading investors in a company from before he took office as Texas’ top lawyer.

The U.S. Securities and Exchange Commission brought similar, civil charges against Paxton earlier this year. On Friday, a federal judge dismissed that case but gave the commission 14 days to amend its allegations against Paxton.

Paxton’s lawyers had hoped the decision in the SEC case would signal a similar outcome for the state charges. They reiterated that argument Wednesday.