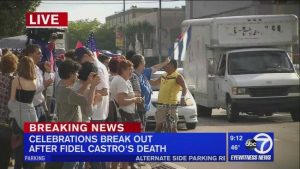 From the Miami Herald

Fidel Castro died, and Cuban Miami did what it does in times of community celebration: It spilled onto the streets of Little Havana — and Hialeah, and Kendall — to honk horns, bang pans, and set off more than a few fireworks, saved for exactly the sort of unexpected special occasion that proved worthy of their detonation.

The scene across Miami-Dade County, the cradle of the Cuban exile community, was one of pure, raw emotion. This time, after decades of false alarms, Castro’s death was real.

“I wish my dad was here to see this,” 27-year-old Abraham Quintero cried just before 2 a.m. Saturday.

Wearing an “I love Hialeah” T-shirt, he stood on West 49th Street and Ludlam Road, where police quickly set up watch posts to make sure impromptu revelers stayed safe.

Passing cars honked incessantly. People waved huge Cuban flags. Parents carried their children and puppies. A few people appeared clad in pajamas and, in one case, flamingo slippers, jolted out of bed — and out of their homes — by the late-night news.

Shortly after midnight, Cuban leader Raul Castro announced on state television, his voice trembling, that his older brother had died at 10:29 p.m.

“Toward victory, always!” he said.

The streets in Havana, where a nine-day mourning period was announced, appeared to remain quiet. Not so in Miami, the city across the Florida Straits shaped by exiles who fled Fidel Castro’s 1959 revolution.

Calle Ocho remained closed to traffic, from Southwest 35th to 37th Avenues, to accommodate the elated crowds gathered at Versailles Cuban restaurant, the iconic exile hangout, to cheer and wave signs — no matter how unseemly it might be to revel in an old man’s death.

Some even yelled profanities about Castro.

Someone outside the restaurant brought a portable karaoke system, and the crowd sang Cuban star Willy Chirino’s exile anthem, “Nuestro dia ya viene llegando” (Our day is coming), as the scent of long-saved Cuban cigars burned at last.

People were still popping champagne bottles in the middle of the street after 4 a.m. — an eruption of jubilation that remained peaceful throughout the night and into Saturday morning.

“I don’t think we’ve made any arrests and don’t expect to have any violence due to this long awaited day,” said Miami Police Officer Rene Pimentel.

Pimentel, a Cuban-American whose family tried for 15 years to leave the island, said he awoke early Saturday to text messages alerting him of Castro’s death — news he was eager to share with his father, who moved the family out of Cuba on Sept. 29, 1975.

“It was a great feeling to wake my dad and tell him that the day so many of us had been waiting for was finally here,” he said. “Fifteen long years to get to this great country.”

Miami Mayor Tomas Regalado deployed himself to Versailles after midnight and was there when the sun came up, chatting up the crowds and conducting interviews in what has become the unofficial media staging ground for capturing Miami’s reaction to major Cuban news.

The Cuban-born mayor, whose father served 14 years in prison under Castro, said there was little use in trying to steer the celebration toward any sort of official venue or event.

“Everything has been spontaneous,” said Regalado, 69, who came to the United States in 1961 under the Pedro Pan program. “The only thing that the city has done is accommodate the people.”

“The written plans are no good because people do what they want,” he continued. “I’ve gotten calls from some organizations saying how they want to organize an event. But to tell people to go to a specific place, you can’t. People go where they want to go.”

A relative hard-liner on U.S.-Cuba relations — Regalado opposed putting a Cuban consulate in Miami but didn’t object to the idea of running Havana-bound ferries out of Port Miami — the mayor said the Cuban people should feel a sense of unity in the celebrations on Miami’s streets.

“I think what’s happening right now is a sign of solidarity with the people of Cuba,” he said.

As the crowd swelled to hundreds outside Versailles’ cafecito window in the predawn hours, a panoply of Latin American immigrants who have followed Cubans to Miami, including Venezuelans, Colombians and Puerto Ricans, turned out in a show of support.

The mood was festive, with periodic outbursts of anger at Raul Castro.

“One down, now comes the other,” yelled Enrique Rodriguez, 58, to cheers. “He can go to hell just like his brother.”

Barely half an hour after the news broke, several street sellers had parked on the sidewalk selling everything from flags to beaded necklaces in Cuba’s colors. The Cuban flags went very quickly: Tony Erst, one of the sellers, said he was sold out of 100 Cuban flags with car clips within 20 minutes.

On the outskirts of the rowdy crowd, Vivian Trigo, 57, stood quietly with a yellowed, framed photo of her parents. She came to Miami from Cuba in 1961, when she was 2 years old.

“They passed away before they could see this day,” she said. “I wish they could be here, but I know they are. And they can rest in peace now that the devil is gone.”

After a first weak attempt to start singing the national anthem by older people in the crowd, a woman got a megaphone and led the crowd in the first two stanzas of La Bayamesa. Many in the crowd had pulled up the lyrics on their phones.

An apparent march, destination unclear, got under way on foot along westbound Southwest Eighth Street shortly before 3:30 a.m. At least one couple danced salsa in the middle of the street, surrounded by a crowd.

Carlos Lopez, 40, brought his 12-year-old daughter, Tiffany, to witness history. In Miami, it felt like the sort of moment people would recall for years to come: Remember where you were when Fidel died?

“We are not celebrating one man’s death, but the death of an ideology,” Lopez said. “We are celebrating that little piece of liberty we got back today.”

He hugged his daughter tight: “She’ll tell her grandchildren about this one day.”

Victor Perez-Aubreu, 21, came out with four friends to join the action. Little will change on the island immediately, he predicted, but the wee hours of Saturday were for celebrating.

“I don’t think this means anything will change tomorrow,” he said. “But there’s an emotional excitement to this.”

“The head of the snake is gone,” said 20-year-old Sergio Morales, who came to Miami from Cuba with his parents and younger brother in 2003. He waved a Cuban flag.

So many reporters descended on Versailles that Miami police had to designate an area for a spokesman to give interviews. Media choppers swirled overhead.

Regalado held court by the restaurant entrance, surrounded by microphones. He outlined how the city recalled officers to work, and posited that perhaps the Cuban government waited until late on a Friday night to announce Castro’s death in order to avoid outbursts on the island.

Across Miami-Dade, police deployed to protect spontaneous demonstrations, including at Southwest 87th Avenue and Bird Road, by a La Carreta Cuban restaurant. All local TV stations — in English and Spanish — cut into regular programming to provide live special coverage.

“I said, ‘Are you sure?'” Gimenez asked, recalling the many times over the years that Castro’s supposedly imminent death had been rumored.

The mayor said he telephoned his 94-year-old father in Miami — who told him, tonight, he’d sleep a little more soundly.

U.S. Rep. Ileana Ros-Lehtinen, a Miami Republican who left Cuba when she was 8 years old, said she was “snoring” when the news broke.

“I had not heard any rumors,” she said. “But all of us have had our press releases ready for some time!”

She cast Castro’s death not as a moment of joy but as a “new opportunity for Raul Castro to listen to the winds of change.”

“This is the moment that so many in our community have been waiting for since I can remember, since I was a child,” said U.S. Rep. Carlos Curbelo, a Miami Republican whose parents fled Cuba. “Everyone’s been waiting for this moment because they believed it would be the beginning of the end of the nightmare, and I think that’s exactly what this is: the opening of a door to a brighter future.”

Castro’s death comes during the transition of President-elect Donald Trump, who pledged as a candidate to undo President Barack Obama’s policy renewing diplomatic relations and pursuing closer ties with Cuba.

In an odd historical coincidence that did not go unnoticed among some exiles, Castro died 17 years to the day a 5-year-old boy named Elian Gonzalez was rescued off Florida’s coast, also on Thanksgiving weekend.

Contemplating the revelry from the parking lot of a Latin Cafe in Hialeah was 80-year-old Elisa Martin, who fled Cuba in 1962, leaving behind her father and cousins. She seemed bewildered, eyes wide at the unfolding scene.

“I feel the worst for the people still living in Cuba,” she said. “He’s done so many bad things.”

Her son, Dan Martin, a 46-year-old engineer who was born in Miami, watched with amazement.

“I find it hard to be believe. We’ve been out here so many times when it wasn’t true and this time it is,” he said. “I have so many family members who never lived to see this day.”

Oscar Gomez, who turned 18 on Thursday, considered the street party in Hialeah “the biggest celebration ever.” “What else could I ask for?”

Hialeah Mayor Carlos Hernandez, who was born in Cuba, predicted the demonstrations would “continue all day.”

“I can’t say I am unhappy,” he acknowledged. “This is something we have been waiting for for a long time.”

Even a steady rain did nothing to turn away the crowd. If anything, the crowd delighted in it, dancing under umbrellas in the downpour.

“This is one step closer to me being able to go back to my country,” said 49-year-old Eduardo Blasto. “I’ve been waiting for this for 49 years.”