Over the last fifty years, long-term studies following individual animals over entire lifespans have allowed insight into the evolutionary influence of social behaviour – finally fulfilling the holistic approach to evolution first suggested by Darwin, argues the author of a new milestone work on mammal societies.

All animals live in a form of society, and the structures of these societies have been as important for the course of evolution as their physical environment because they steer the drive to reproduce, says Professor Tim Clutton-Brock, author of the first major synthesis of mammalian social behaviour.

While Darwin initially recognised the importance of social behaviour in his 1871 masterpiece The Descent of Man, biologists focused on anatomy rather than behaviour for many decades. In his new book Mammal Societies, Clutton-Brock argues that the “true century of Darwin was delayed for nearly 100 years” as a consequence.

Field studies of animal behaviour began with the ringing of birds in the 1930s. But it was the arrival of cheap air travel in the 1960s that fuelled behavioural fieldwork of mammals, says Clutton-Brock, as it enabled scientists to conduct long-term studies of natural populations of the larger, long-lived mammals in Africa and Asia – from gorillas to big cats.

Pioneers such as Jane Goodall and Dian Fossey, both of whom studied at Cambridge under famed zoologist Robert Hinde (as did Clutton-Brock) set up primate field studies in the 1960s and 70s which continue today.

These researchers and others began to follow animal communities over entire lives and then generations, recording a detailed ‘life history’ of each animal. In doing so, they revealed how foraging strategies affect group dynamics, how reproductive behaviour creates breeding systems, and how these create networks of kinship and sociality.

This shifted how scientists viewed wild animals: as individuals with personality traits that hold positions – some fluid, some stable – in often complex hierarchies. These societies influence who gets to breed, who gets to survive, and consequently how animals evolve.

“Darwin’s message was that selection works through differences in breeding success between individuals, not between species or populations, and the success of individuals is determined by their position in the societies they live in,” says Clutton-Brock, one of the world’s leading behavioural ecologists from Cambridge’s Zoology Department.

“That’s why it is important to be able to recognise and follow individuals. If you see a field full of rabbits, for example, you can’t tell sex, age, kinship, dominance – all of which is crucial to understanding what they are doing. This only comes alive once you follow individuals over significant periods of their lives. Long-term studies can get at questions that nothing else can answer.”

Long-term studies also allowed the wider public to identify with individual animals. The killing of studied animals – such as Digit the gorilla from Fossey’s study, or the recent hunting of Cecil the lion – provoked outcry, which in turn raised awareness of the need for conservation.

Clutton-Brock has worked on Kalahari meerkats for the last twenty years, and the lives of his study animals were featured in the popular TV series ‘Meerkat Manor’. When a dominant female, Flower, succumbed to snakebite in 2007, fans of the show grieved publicly on internet forums. Clutton-Brock wrote a book that told the true story of Flower’s life from birth to death – the first complete biography of a wild animal.

Now, across twenty chapters in Mammal Societies, he brings together decades of accrued knowledge from observations and experiments on social behaviour right across the field, much of which is the result of the thousands of animal life histories collected from long-term studies over the last fifty years. 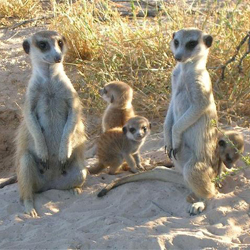 While there have been reviews of social organisation for birds and ants, this is the first synthesis of sociality across mammals. The new book is set to become a milestone in the literature of evolution, covering social behaviour from baboons to bears, zebra to squirrels, and ending in the most successful mammal society of all: ours.

For Clutton-Brock, part of the excitement of pulling back to view such an extraordinary sweep of social behaviour is the generalities that start to appear. For example, much of the book is divided between the sexes.

Behaviours examined in the book range from extremes of competition, such as infanticide committed by baboons to increase their own breeding prospects, and hyena cubs, born with a full set of sharp teeth, who will sometimes kill their own siblings. But also extremes of cooperation: female meerkats helping each other through birth; male chimpanzees caring for orphaned juveniles.

The final chapters focus on human social progress, from our hominin ancestors’ journey through the polygynous breeding societies still seen in the great apes, to the unique cooperation with strangers and kin alike that defines us as a species.

If you want to put human society and evolution in perspective, says Clutton-Brock, it is the other mammals which provide it, and generalisations drawn from across mammalian social behaviour feed into our understanding of humanity.

“Though modern humans are mostly monogamous, we carry the legacy of past polygyny, as our ancestors lived in societies where a single male dominates several females. In polygynous mammals such as red deer, males only breed for a short time, as competition is so fierce and often brutal. This may relate to the shorter lifespan and larger bodies we see in men,” he explains.

Clutton-Brock has led a study of red deer on the Isle of Rum for over forty years which often feature on the BBC’s Spring and AutumnWatch, as well as the famous meerkats, and his studies have trained large numbers of young biologists in fieldwork. 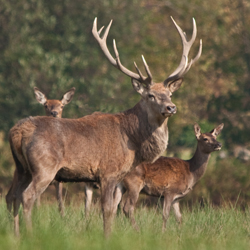 The meerkat project has taken a dozen interns each year (“I don’t take anyone for less than a year”) for the last twenty years. Many go on to do PhDs, starting field studies of their own. Clutton-Brock admits he had to learn the hard way. “I did my PhD on forest monkeys – what a disaster. The animals were a hundred feet above you eating leaves, and urinated in your face as you watched them from below.”

Mammal Societies, a project that has taken some ten years to complete, ends with the mammal that has come to dominate the planet. Clutton-Brock offers suggestions to arguably the central question of human evolution: ‘Why us?’

“Many of the characteristics of higher primates may have facilitated the evolution of our own unusual traits,” he says. “They live in complex societies with many competitors and rely on support from other individuals to breed and protect their offspring. The difficult social decisions they have to take has probably played an important role in the evolution of our large brains and understanding of cause and effect.”

The book closes with a warning to our species: that controlling population growth and preventing environmental destruction requires cooperation on a global scale – a feat no animal has managed. “This would be a novel development in mammals, and it remains to be seen whether humans are able to meet this challenge.”