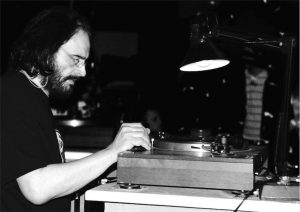 David Manucso, the pioneering New York City DJ who launched the underground dance music scene with his in 1970 club The Loft, has died. He was 72. Mancuso’s exquisite taste in music and his mission to host inclusive parties safe for GLBTQ people and other marginalized communities made him a beloved icon of club culture. From The Guardian:

Unlike the commercial clubs that existed to make a profit, Mancuso and particularly his event Love Saves the Day, offered a space for its members, often an LGBTQ audience, to celebrate nightlife without police interference.

“For me, the core [idea behind The Loft] is social progress,” he said in 2013. “How much social progress can there be when you’re in a situation that is repressive? You won’t get much social progress in a nightclub. In New York City they changed the law [for entry into clubs, from] 18 to 21 years old; where can this age group go to dance? In my zone, you can be any age, a drinker or non-drinker, a smoker or a non-smoker. And that’s where I like to be.”