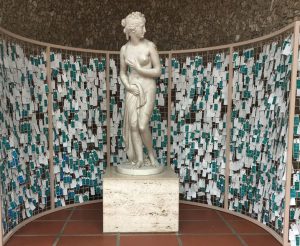 This summer we invited visitors to the Getty Villa to write and share prayers to the ancient goddess Venus. Here are the themes that emerged.

Venus (Greek Aphrodite) was a goddess close to the heart of her people. From archaeological, artistic, and written sources we know Venus was one of the most frequently depicted gods in domestic shrines. Her domain was vast, including love, sexuality, fertility, sexual maturity, marriage, harmony, war, and sea-faring, amongst many other aspects of Greek culture. As part of Roman Holidays, this summer visitors to the Getty Villa were invited to communicate with our touch statue, a replica of Antonio Canova’s Venus (1820), through hanging prayer tags.

Roman Holidays was designed to introduce visitors to a Roman’s version of a holiday, generally in the context of a religious festival. Venus allowed visitors to explore the ritual and personal aspects of daily life by answering one question: what would you pray for? We hoped they would get an immersive and intimate experience while learning how ancient people negotiated with structured ritual to form relationships with their gods. The response was overwhelming—we estimate around 2,000 prayers were written a week.

In the ancient world the relationship between people and their gods was based on a system of reciprocity. Suppliants could approach the gods with proper ritual and offerings to ask for assistance or thank them for granting a previous request. Based on this system, we provided a guide for visitors to write their prayers. 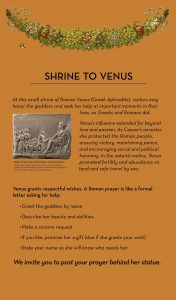 Given the means to engage with a 2,500-year-old goddess and some instructions about how to show good manners, what did people ask for today? There are some broad patterns we’d like to share; they reveal a strong overlap with the concerns of ancient suppliants. (General conclusions were made from the thousands of tags we received during the course of this program, but specific images of prayers (marked with a crown) were taken during days when visitors were advised of their potential posting on social media.)

A large percentage of people used their prayers to self-reflect, asking for confidence, happiness, strength, guidance, health, and inner peace. In conjunction with wishes for self-improvement, many wrote prayers for the happiness, health, well-being, and success of their loved ones. 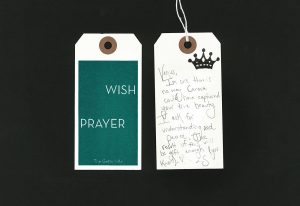 “Venus, I’m sure there is no way Canova could have captured your true beauty. I ask for understanding and peace. The result of this will be gift enough (you know). —S.”

Many visitors asked Venus to give them a romantic partner, and some went to great lengths to describe their perfect partner, usually in hopeful or serious tones, using words like wealthy, attractive, intelligent, confident, funny, and kind. Other visitors named their person of choice, while some simply asked for “true” and “eternal” love. A few even left their phone numbers and Instagram handles in an attempt to attract other visitors!

Those who already have partners asked to repair struggling relationships or strengthen healthy ones. Other couples simply signed their names as a testament to their experience at the Villa. 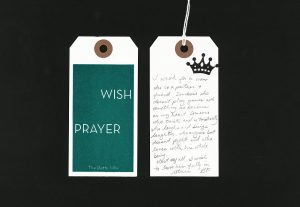 “I wish for a man who is a partner and friend. Someone who doesn’t play games with something as precious as my heart. Someone who trusts and is trustworthy who laughs and brings laughter, who argues but doesn’t fight and who loves with his whole being. Most of all I wish to love him fully in return —BF”

Couples asked for help conceiving children, or prayed Venus would bless them with an easy and safe delivery. Sometimes relatives prayed for Venus to intervene in the fertility of loved ones. Parents both new and experienced prayed to Venus for the skills to be better parents. 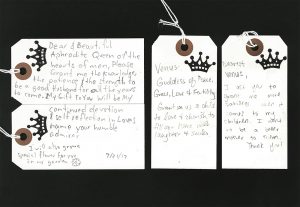 Left: “Dear and beautiful Aphrodite Queen of the hearts of men, please grant me the knowledge, the patience, and the strength to be a good husband for all the years to come. My gift to you will be my continued devotion and self reflection in loves named your humble admirer. I will also grow a special flower for you in my garden.” Center: “Venus, goddess of peace, grace, love and fertility, grant us a child to love and cherish to fill our home with laughter and smiles.” Right: “Dearest Venus, I ask you to grant me more patience when it comes to my children. I want to be a better mother to them. Thank you!”

State of the World: Society and Politics

As in ancient times, prayers today can take the form of social and political commentary. In the imperial period, Venus served an important role in civic affairs, used as a political authority by figures such as Julius Caesar and Augustus. They called upon her as their patron goddess, ancestor, and Mother of the State. (1) Similarly, visitors asked Venus to intervene in the state of the world. Some visitors took a direct approach and wrote “WORLD PEACE,” while others wrote more specific critiques or support of political leaders, governments, and social movements from both the US and abroad. 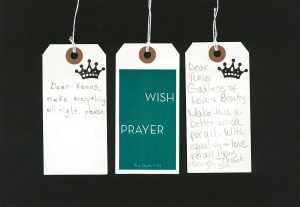 Left: “Dear Venus, make everything all right, please.” Right: “Dear Venus, goddess of love and beauty, make this a better world for all. With equality and love. For all living things. Thank you.”

Visitors across the spectrum prayed for wealth. While a few wanted financial independence and the resources to overcome poverty, many prayers leaned towards greed. They wanted millions of dollars, winning lotto tickets, sports cars, mansions, and high numbers of lower-status items.

Other than material wealth, visitors from kindergarteners to PhD candidates prayed for academic success for themselves and others. Many also prayed to get into college, get jobs after college, land their dream jobs, or advance in their current professions. 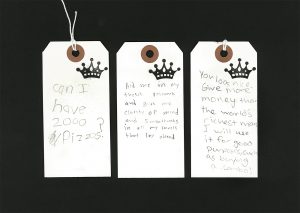 Left: “Can I have 2000 pizzas?” Center: “Aide me in my thesis research and give me clarity of mind and smoothness in all my travels that lay ahead.” Right: “You look nice. Give more money that the world’s richest man. I will use it for good purposes such as buying a Lambo!”

There were some prayers that didn’t fit with the spirit of the program. Some of these prayers consisted of sexually explicit wishes. Others were written using disrespectful language, or contained direct attacks on Venus as an irrelevant, conquered, false, and imaginary god. As in antiquity, Venus’s nudity can still shock people. She received many critiques to “put some clothes on!”

Children’s prayers were undoubtedly the most imaginative. Children wanted dogs, cats, and unicorns. Sometimes they wanted to be dogs, cats, and unicorns, or possess powers of flight and invisibility. Wishes from children ranged from good grades to no school, ice cream buffets to ending world hunger, and billions of dollars to simply not being poor. Children also wanted trending toys and smart phones.

By far the most heartbreaking were prayers from children who have experienced the death of a loved one, are being bullied, or have a difficult home life. They prayed for comfort and peace for themselves and their families. 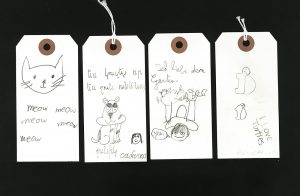 In exchange for fulfilling all these wishes, visitors offered to visit Venus again here at the Villa, and some even pledged to bring gifts like flowers, fruit, or jewelry. Those who prayed for self-improvement often promised to share their newfound insight with their loved ones and their communities. Visitors also offered to honor Venus through their work or through specific acts of ritual worship, and children often left artwork on their tags for the goddess.

Visitors sometimes offered Venus real gifts. She received sea shells, toys, jewelry, snacks, and children’s drawings, often of animals. She even received a traffic-camera photo of someone running a red light. They signed their name on the back, perhaps so Venus would know who to defend in court! 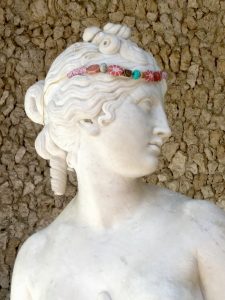 Visitors to the Getty Villa left creative offerings to our touch statue of Venus. Here, she was gifted with a bead headband. Below, feathers, fruit, flowers, and gems. 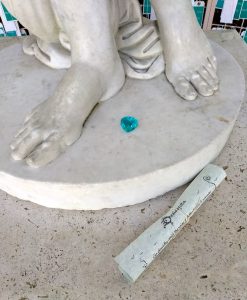 The project showed us that people’s desires have not fundamentally changed in the last 2,000 years. As demonstrated in the hymn below, there is much overlap between ancient and modern prayers to Venus. People want to love and be loved in successful and happy relationships with their friends and family. They want wealth, glory, success, health, and beauty. They want to live a long life, and be close to their gods.

The experience didn’t end with the written prayers. When visitors hung their prayers, read the wishes of their peers, and responded out loud, they contributed to a larger response to history, spirituality, and public vulnerability. These tags were a testament to how much of Venus’s identity has (or has not) translated into the twenty-first century, as our visitors fully embraced the opportunity to learn through emotional experience. As a visitor-driven program, its success was measured in the richness and diversity of their collective interpretation and response to our program. We could not be more thankful and proud that our visitors feel the Getty is a space to connect the past to their present in a personal and meaningful way. 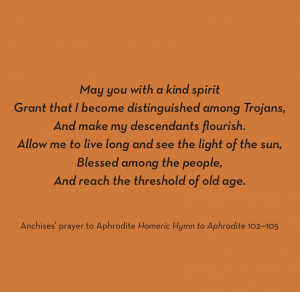 “May you with a kind spirit grant that I become distinguished among Trojans, and make my descendants flourish. Allow me to live long and see the light of the sun, blessed among the people, and reach the threshold of old age.” —Anchises’ prayer to Aphrodite from Homeric Hymn to Aphrodite 102–105