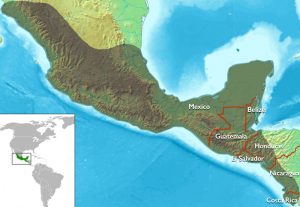 Map of Mesoamerica, with the borders of modern countries

Avocado, tomato, and chocolate. You are likely familiar with at least some of these food items. Did you know that they all originally come from Mexico, and are all based on Nahuatl words (ahuacatl, tomatl, and chocolatl) that were eventually adopted by the English language?

Nahuatl is the language spoken by the Nahua ethnic group that is found today in Mexico, but with deep historical roots. You might know one Nahua group: the Aztecs, more accurately called the Mexica. The Mexica were one of many Mesoamerican cultural groups that flourished in Mexico prior to the arrival of Europeans in the sixteenth century.

Mesoamerica refers to the diverse civilizations that shared similar cultural characteristics in the geographic areas comprising the modern-day countries of Mexico, Guatemala, Honduras, Belize, El Salvador, Nicaragua, and Costa Rica. Some of the shared cultural traits among Mesoamerican peoples included a complex pantheon of deities, architectural features, a ballgame, the 260-day calendar, trade, food (especially a reliance on maize, beans, and squash), dress, and accoutrements (such as earspools).

Some of the most well-known Mesoamerican cultures are the Olmec, Maya, Zapotec, Teotihuacan, Mixtec, and Mexica (or Aztec). The geography of Mesoamerica is incredibly diverse—it includes humid tropical areas, dry deserts, high mountainous terrain, and low coastal plains. An anthropologist named Paul Kirchkoff first used the term “Mesoamerica” (meso is Greek for “middle” or “intermediate”) in 1943 to designate these geographical areas as having shared cultural traits prior to the invasion of Europeans, and the term has remained.

Typically when we discuss Mesoamerican art we are referring to art made by peoples in Mexico and much of Central America. When people mention Native North American art, they are usually referring to indigenous peoples in the U.S. and Canada, even though these countries are technically all part of North America. More recently, archaeologists and art historians have considered connections between the Southwestern and Southeastern U.S. and Mesoamerica, an area sometimes called either the Greater Southwest or Greater Mesoamerica. Focusing on these connections demonstrates how people were in contact with one another through trade, shared beliefs, migration, or conflict. Ball courts, for instance, are found in Arizona sites such as the Pueblo Grande of the Hohokam. It is important to remember that modern-day geographic terms—like Mesoamerica or the Southwestern U.S.—are recent designations.

This essay generalizes about Mesoamerican cultures, but keep in mind that each possessed unique qualities and cultural differences. Mesoamerica was not homogenous.

Art historians and archaeologists divide Mesoamerican history into distinct periods and some of these periods are then further divided into the sub-periods—early, middle, and late.

The date for the end of the Postclassic period is somewhat contested as it presumes that Mesoamerican culture largely ended with the arrival of Spaniards into the Mexica capital of Tenochtitlan in 1519, though Mesoamerican culture continued under Spanish control, albeit significantly transformed.

You might also encounter the term Pre-Columbian, which is a term designating indigenous cultures prior to the arrival of Columbus. It includes those in Mesoamerica, as well as in South America and the Caribbean. This term is problematic for several reasons, and is explored in another essay.

What language did people speak?

There was no single language that united the peoples of Mesoamerica. Linguists believe that Mesoamericans spoke more than 125 different languages. For instance, Maya peoples did not speak “Mayan”, but could have spoken Yucatec Maya, K’iche, or Tzotzil among many others. The Mexica belonged to the bigger Nahua ethnic group, and therefore spoke Nahuatl. 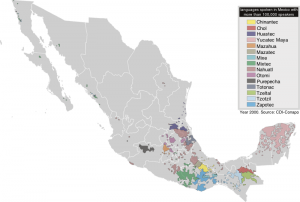 Indigenous languages in Mexico currently spoken by more than 100,000 people

To students learning about Mesoamerica for the first time, the incredible diversity of people, languages, and even deities can be overwhelming. I recall my first Mesoamerican art history class vividly. I was intimidated by my lack of familiarity with different Mesoamerican words, languages, and cultural groups. By the end of the semester I was proud that I could differentiate between the Zapotec and Mixtec, and could spell Tlaloc. It took me a few more years to be able to spell and pronounce words like Tlacaxipehualiztli (Tla-cawsh-ee-pay-wal-eeezt-li) or Huitzilopochtli (Wheat-zil-oh-poach-lee).

Mesoamerican writing systems vary by culture. Rebus writing (writing with images) was common among many groups, like the Nahua and Mixtec. Imagine drawing an eye, a heart, and an apple. You’ve just used rebus writing to communicate “I love apples” to anyone familiar with these symbols. Many visual writing systems in Mesoamerica functioned similarly—although the previous example was simplified for the sake of clarity. You might encounter the phrases “writing without words” or “writing with signs” used to describe many writing systems in Mesoamerica. It is also called pictographic, ideographic, or picture writing. 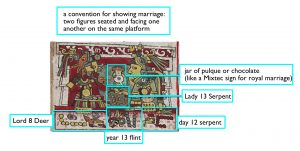 Only the Maya used a writing system like ours, where signs like letters designate sounds and syllables, and combined together to create words. Maya hieroglyphic writing is logographic, which means it uses a sign (think of a picture, symbol, or a letter) to communicate a syllable or a word.

Other shared features among Mesoamerican peoples were the 260-day and 365-day calendars. The 260-day calendar was a ritual calendar, with 20 months of 13 days. Based on the sun, the 365-day calendar had 18 months of 20 days, with five “extra” nameless days at the end. It was the count of time used for agriculture.

Imagine both of these calendars as interlocking wheels. Every 52 years they completed a full cycle, and during this time special rituals commemorated the cycle. For example, the Mexica celebrated the New Fire Ceremony as a period of renewal. These cycles were understood as life cycles, and so reflect creation, death, and rebirth. The Maya (especially during the Classic period), also used a Long Count calendar in addition to the two already mentioned (rather than a cyclical calendar, the Long Count marked time as if along an extended line that does not repeat).

Religion and pantheon of gods

A complex pantheon of gods existed within each Mesoamerican culture. Many groups shared similar deities, although there was a great deal of variation. Deities that had important roles across Mesoamerica included a storm/rain god and a feathered serpent deity. Among the Mexica, this storm/rain god was known as Tlaloc, and the feathered serpent deity was known as Quetzalcoatl. The Maya referred to their storm/rain deity as Chaac (there are multiple spellings). The equivalent of Quetzalcoatl among different Maya groups included Kukulkan (Yucatec Maya) and Q’uq’umatz (K’iche Maya). Cocijo is the Zapotec equivalent of the storm/rain god. Many artworks exist that show these two deities with similar features. The storm/rain deity often has goggle eyes and an upturned mouth/snout. Feathered serpent deities typically showed serpent features paired with feathers. 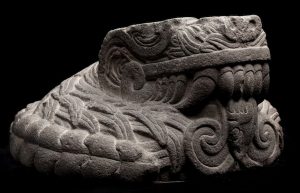 It is difficult to generalize about Mesoamerican religious beliefs and cosmological ideas because they were so complex. Throughout Mesoamerica, there was a general belief in the universe’s division along two axes: one vertical, the other horizontal. At the center, where these two axes meet, is the axis mundi, or the center (or navel) of the universe. On the horizontal plane, four directions branch off from the axis mundi. Think of the four cardinal directions (north, south, east, and west). On the vertical plane, we generally find the world split into three major realms: the celestial, terrestrial, and underworld. 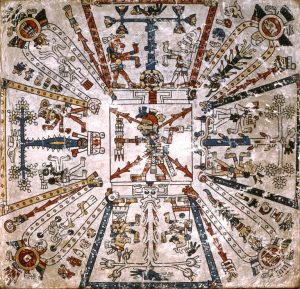 One Mexica example helps to clarify this complex cosmological system. An image in the Codex Féjervary-Mayer displays the cosmos’s horizontal axis. In the center is the deity Xiuhtecuhtli (a fire god), standing in the place of the axis mundi. Four nodes (what look almost like trapezoidal petals) branch off from his position, creating a shape called a Maltese Cross. East (top) is associated with red, south (right) with green, west (bottom) with blue, and north (left) with yellow. A specific plant and bird accompany each world direction: blue tree and quetzal (east), cacao and parrot (south), maize and blue-painted bird (west), and cactus and eagle (north). Two figures flank the plant in each arm of the cross. Together, these figures and Xiuhtecuhtli represent the Nine Lords of the Night. This cosmogram describes how the Mexica conceived of the universe. 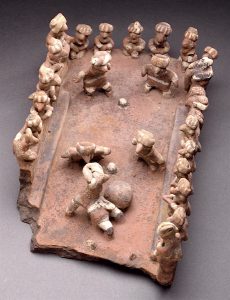 Peoples across Mesoamerica, beginning with the Olmecs, played a ritual sport known as the ballgame. Ballcourts were often located in a city’s sacred precinct, emphasizing the importance of the game. Solid rubber balls were passed between players (no hands allowed!), with the goal of hitting them through markers. Players wore padded garments to protect their bodies from the hard ball.

The meanings of the ballgame were many and varied. It could symbolize a range of larger cosmological ideas, including the movement of the sun through the underworld every night. War captives also played the game against members of a winning city or group, with the game symbolizing their defeat in war. Sometimes a game was even played instead of going to war.

Numerous objects display aspects of the ballgame, attesting to its significant role across Mesoamerica. We have examples of clay sculptures of ballgames occurring on courts. Ballplayers are also frequent subjects in Maya painted ceramic vessels and sculptures. Stone reliefs at El Tajin and Chichen Itza depict different moments of a ballgame culminating in ritual sacrifice. Painted pictorial codices, such as the Codex Borgia (above), display I-shaped ballcourts, and stone depictions of ballgame clothing have been found. Today, people in Mexico still play a version of the ballgame. 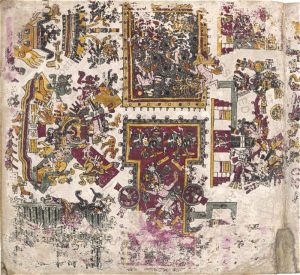 Mesoamerican societies continue to impress us with their sophistication and accomplishments, notably their artistic achievements. Our understanding continues to expand with ongoing research and archaeological excavations. Recent excavations in Mexico City, for instance, uncovered a new monumental Mexica sculpture buried with some of the most unique objects we’ve ever seen in Mexica art. With these discoveries, our understanding of the Mexica will no doubt grow and change.