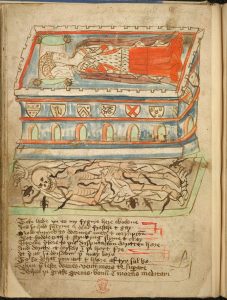 Drawing of a grave from a Carthusian miscellany of poems, chronicles, and treatises in Northern English, including an epitome or summary of Mandeville’s travels / c.1400-1499 / Taken from the preface of The Disputacione betwyx the Body and the Wormes, this image depicts a transi tomb, a tomb that contains two images of the deceased: a colourful effigy of a richly dressed woman, contrasted with her decomposing corpse below. Death here is the great leveller, her wealth and status in life do not mean anything once she is dead.

Images of the afterlife dominate illuminated manuscripts, paintings, sculptures and literature in the Middle Ages. Dr Alixe Bovey examines how ideas of Heaven, Hell and Purgatory impacted on everday life.

Death was at the centre of life in the Middle Ages in a way that might seem shocking to us today. With high rates of infant mortality, disease, famine, the constant presence of war, and the inability of medicine to deal with common injuries, death was a brutal part of most people’s everyday experience. As a result, attitudes towards life were very much shaped by beliefs about death: indeed, according to Christian tradition, the very purpose of life was to prepare for the afterlife by avoiding sin, performing good works, taking part in the sacraments, and keeping to the teachings of the church. Time was measured out in saint’s days, which commemorated the days on which the holiest men and women had died. Easter, the holiest feast day in the Christian calendar, celebrated the resurrection of Christ from the dead. The landscape was dominated by parish churches – the centre of the medieval community – and the churchyard was the principal burial site. 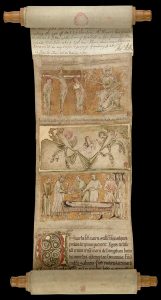 Miniature from the mortuary roll of Lucy, foundress and first prioress of the Benedictine nunnery of Castle Hedingham, with tituli (responsive prayers) 1-6, of Lucy de Vere’s soul being carried to heaven by angels / c.1230 / Mortuary rolls would be used to announce the deaths of well-known or important religious people, such as Lucy who was the first prioress of the Benedictine nunnery of Hedingham in Essex. This announcement would be taken around local communities asking for prayers to be said for the deceased. In this illustration, Lucy’s soul is being carried to Heaven by angels demonstrating that she has led a good, religious life and will be rewarded in the afterlife.

The Church taught that the fate of a person’s soul was determined not only by his or her behaviour in life, but also by the manner of his or her death. Medieval Christians hoped for a ‘good death’, ideally at home in bed, surrounded by friends and family, and with a priest in attendance to administer the Last Rites, the final forgiveness of sin. Sudden death – the ‘bad death’ – was greatly feared, as dying unprepared, without confessing one’s sin and receiving the last rites, would increase the probability of a long stay in Purgatory or, worse, Hell. 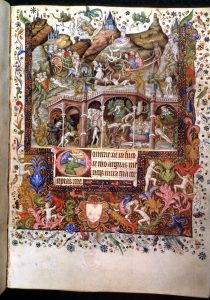 Illustration of ‘A Scene in Hell’, from a Book of Hours / c.1407 / Illustrations of Hell acted as constant reminders for the medieval population that their behaviour on Earth would determine the destination of their soul. Frequently very graphic, this image shows people being captured, tortured and eaten by monsters and demons. Often pictured within devotional books, like this Book of Hours, the Church sent a clear message of what Hell looked like and that it could be avoided through by being a good Christian.

Hell was the destiny for those guilty of mortal sins, while eternal life in Paradise was the reward for the good. The idea of Purgatory, a place where the souls of moderately bad sinners would go for a period of purification before being allowed into heaven, was accepted as a doctrine of the Catholic Church in the 1200s, and this idea came to shape much of the religious culture of the later Middle Ages. The living were encouraged to offer up prayers for the dead to lessen their time in Purgatory. This image of angels at the top of this page shows the death and funeral of Lucy de Vere, the first prioress of the Benedictine nunnery of Hedingam in Essex. When she died, around 1225, her successor sent the roll – over 19 feet long – to other religious houses, asking them to pray for her soul. As it passed around East Anglia and back and forth across southern England, each of them added an inscription asking for reciprocal prayers.

It was believed that at the end of time, angels would rouse the dead from their graves to be judged by God; at this point, Purgatory would be closed forever and the souls confined there would be transferred to Heaven or Hell for eternity. The Last Judgement was often depicted in manuscripts, with God seated on a rainbow as the dead clamber out of their graves for face judgement. 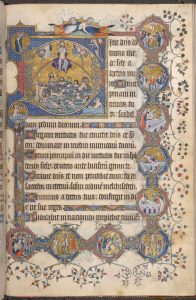 Historiated initial of the Last Judgement, from the ‘St Omer Psalter’ / c.1330-1340 / The Last Judgement was believed to be the moment at the end of time when souls would leave Purgatory and be transferred either to Heaven or Hell for eternity. Fear of the Last Judgement, exemplified by illustrations within biblical manuscripts, would have encouraged medieval Christians to live more virtuous lives. As depicted here, God was often illustrated seated on a rainbow whilst the dead are shown leaving their graves, summoned by angels, to face the final judgement of their souls.

Terrifying images of life and death

The Office of the Dead, a series of prayers to be said in anticipation of death, at a funeral, or in remembrance of the dead, was a standard part of the Book of Hours, a type of prayer book often owned by wealthy lay men and women. Some books mark the beginning of the Office of the Dead with an image showing a funeral or burial; others begin with horrifying images of the living being attacked by Death: such images must have offered a powerful incentive to their owners to pray. 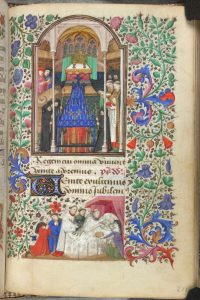 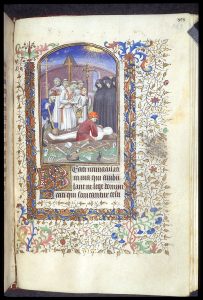 Miniature of a burial, from the ‘Hours of the Umfray Family’ / c.1420 / In order to avoid Purgatory, often described as a prison for the soul in between Heaven and Hell, people would pay for extra prayers to be spoken at their funeral, and, if they could afford it, on the anniversaries of their death. In addition It was essential that the body was buried in consecrated ground, typically in the parish cemetery or church, with heretics or those who committed suicide, being denied this privilege.

Terrifying encounters between the living and the dead became more popular from the early 1300s. One common symbol, found in manuscripts, paintings and sculpture, was the story of three living princes who encounter three dead princes, shown as worm-eaten cadavers, who warn the living that they will soon be just as ghastly as the dead. Artists seem to have taken particular care to depict the dead as gruesomely as possible to create a startling contrast to the elegant living princes. 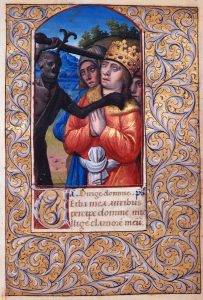 Miniature of an encounter with death, from a Book of Hours / c.1500 / The character of Death was regularly personified within medieval culture, and the message was usually clear: death would find you regardless of your status. 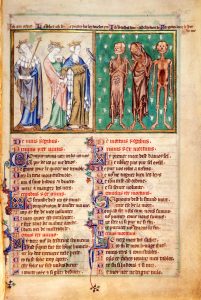 The three living and the three dead princes, from the ‘De Lisle Psalter’ / c.1310-1320 / This is an illustration of the moral story The Three Living and the Three Dead in which three figures, often aristocratic and flaunting their vitality, meet three corpses who warn them about the inevitability of death. The numerous variations of this story and their accompanying illustrations provide a stark contrast between the beauty of the living and the worm-eaten corpses of the deceased. Moral messages about the importance of living a virtuous life on Earth are typical amongst Psalters and Book of Hours.

It is possible to detect an element of black humour in some aspects of medieval death culture. For example, one 15th century poem recounts a debate between a corpse and the worms who are eating her; the dead woman shouts for her knights to defend her but the worms remind her that she is beyond help.

Here, humour is used to underline the fundamentally serious message of the poem: that bodily death is inevitable, and that those who hope for eternal life should focus on spiritual matters.