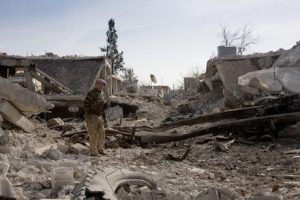 Attempting to defeat IS without beginning to address the political and structural failures that have led to these circumstances borders on the ridiculous.

With the beginning of separate offensives against the Islamic State (IS) in Fallujah and Raqqa, many analysts are highlighting that this is the beginning of the end of IS, with Mosul next in sight. However, there is one key issue with this analysis; these offensives do nothing to address the structural failures in both Iraq and Syria that led to IS’ rise. Moreover, there is no valid plan for the governance of the people being ‘liberated’ from IS. Without addressing these issues, history will repeat itself and IS will either return or morph into another radicalised entity looking to represent marginalised Sunnis.

The offensive in Fallujah happens as the prime minister of Iraq, Haider al-Abadi, is under pressure to show action against IS, due to scores of suicidebombs in Baghdad and his failure to implement reforms. The position of Abadi – and the central government of Iraq in general – optimises the chaos in Iraq, further highlighting the difficulty of implementing a successful post-IS solution.

The uprising of Sunnis and the acceptance of IS by much of the local population was due to political sidelining and authoritarian (majority sectarian) actions by the central government. These issues need to be addressed, but how can they be when the Iraqi parliament cannot even agree on a cabinet?

Sunnis rightly do not trust the Iraqi army, due to its deadly actions against Sunni protestors between 2012 and 2013. Additionally, Sunnis do not trust the Shi’a militias, due to their loyalty to their Shi’a spiritual leaders, their links to Iran, and because they fear revenge by these militias for the actions of IS. This fear is justified given the brutal actions of Hashd al-Shaabi in Tikrit – there have already been reports of similar actions in Fallujah.

Currently there are not enough Sunni forces to enter and take a city, thus leaving forces that are not trusted by the local people to enter. If Iraq cannot provide political answers for those living under IS and cannot send in trusted military forces, it is not ready to defeat IS. Any action under these circumstances will only create animosity and will not address the core issues behind the rise of IS, therefore making any victory merely symbolic – and a weak symbol at that.

The situation in Syria is even worse, as there is total civil war and no agreement in sight. Any political response that addresses Sunni grievances needs also to tackle the central government, the position of the president, the constitution, the geographic makeup of Syria, etc. Therefore the major question is: if IS is defeated in Raqqa, who will replace them? The central government has carried out more atrocities than IS and until these political questions are addressed, there should be real concern over who will fill the vacuum left by IS.

In Raqqa, civilians deeply distrust the Kurdish forces leading the attack, due to what they see as Kurdish land grabs. As a result of the march towards Raqqa, it has been reported that many civilians have joined IS in order to stop the advances of the Kurdish-dominated Democratic Syrian Army. If IS in Raqqa were to be defeated, there is no legitimate force that can manage security in the city; it would either have to be managed by a force seen as occupiers – which would lead to tit-for-tat conflict – or another extremist group/government forces would take IS’ place.

Syria is nowhere near to reaching the political stage where a major offensive against IS could have long-term success. Nor has there been the development of local forces with legitimacy, as promised by coalition forces, to take IS’ territory. IS is just one element of a large, extremely complicated conflict involving multiple forces; the idea of defeating IS without beginning to address the political and structural failures that have led to these circumstances borders on the ridiculous.

In both Iraq and Syria political solutions to address the rise of IS have not been formulated. If IS were defeated today, Sunnis would still be marginalised and would lack any serious form of political representation. Thus, conflict would persist one way or another. Moreover, the development of Sunni forces numerically has not reached the stage where they can seize and hold large cities.

Without this element, any forces will be seen as occupiers rather than liberators and this would likely lead to more displacement – putting further strain on an already over-burdened refugee system in the Middle East. Not to mention the unnecessary loss of life, which without a solid plan to address the core issues, can only be deemed as unacceptable. Finally, due to the correct elements not being in place, the battle will take longer and many of the local population will starve to death due to supplies being prevented from entering the city.

Before any attempt to defeat IS in its major strongholds, there has to be a local force and a local government structure put in place as a replacement. Additionally, Sunnis have to feel that they are adequately represented at a central level and that they have a say in the political process. Without addressing the core issues that allowed for the rapid rise of IS, the effect will be like putting a bandage on a wound that needs stitches – it is an inadequate short-term solution bound to fail in solving the issue.