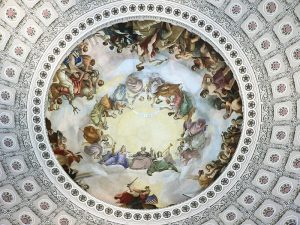 The Apotheosis of Washington depicts George Washington sitting amongst the heavens in an exalted manner, or in literal terms, ascending and becoming a god (apotheosis).

The Apotheosis of Washington is the fresco painted by Greek-Italian artist Constantino Brumidi in 1865 and visible through the oculus of the dome in the rotunda of the United States Capitol Building. The fresco is suspended 180 feet (55 m) above the rotunda floor and covers an area of 4,664 square feet (433.3 m2). The figures painted are up to 15 feet (4.6 m) tall and are visible from the floor below. The dome was completed in 1863, and Brumidi painted it over the course of 11 months at the end of the Civil War. He was paid $40,000 ($640,522 in today’s funds[1]) for the fresco.

Brumidi had worked for three years in the Vatican under Pope Gregory XVI, and served several aristocrats as an artist for palaces and villas, including the prince Torlonia. He immigrated to the United States in 1852, and spent much of the last 25 years of his life working in the Capitol. In addition to The Apotheosis of Washingtonhe designed the Brumidi Corridors. 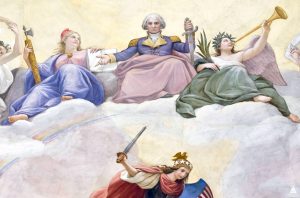 The Apotheosis of Washington depicts George Washington sitting amongst the heavens in an exalted manner, or in literal terms, ascending and becoming a god (apotheosis). Washington, the first U.S. president and commander-in-chief of the Continental Army during the American Revolutionary War, is allegorically represented, surrounded by figures from classical mythology. Washington is draped in purple, a royal color, with a rainbow arch at his feet, flanked by the goddess Victoria (draped in green, using a horn) to his left and the Goddess of Liberty to his right. Liberty wears a red Phrygian cap, symbolizing emancipation, from a Roman tradition where sons leaving the home and/or slaves being emancipated would be given a red cap. She holds a fasces in her right hand and an open book in the other.

Forming a circle between Liberty and Victory are 13 maidens, each with a star above her head, representing the original 13 colonies. Several of the maidens have their backs turned to Washington, said to represent the colonies that had seceded from the Union at the time of painting. Upside down above Washington is the banner E Pluribus Unum meaning “out of many, one”. 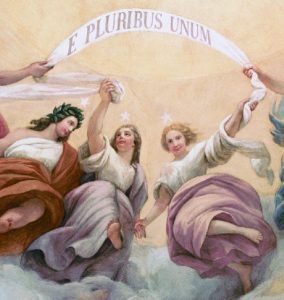 Upside down above Washington is the banner E Pluribus Unum meaning “out of many, one” / Wikimedia Commons

Surrounding Washington, the two goddesses and the 13 maidens are six scenes lining the perimeter, each representing a national concept allegorically: from directly below Washington in the center and moving clockwise, “War,” “Science,” “Marine,” “Commerce,” “Mechanics,” and “Agriculture”. The perimeter scenes are not fully visible from the floor of the Capitol. 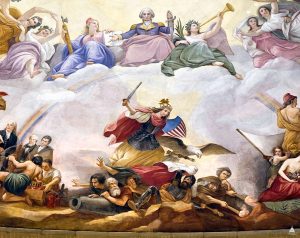 Freedom, also known as Columbia, is directly below Washington in the personification of War. The scene depicts a woman fighting for liberty with a raised sword, a cape, and a helmet and shield (in the colors of the American flag) trampling figures representing Tyranny and Kingly Power. To Freedom’s left assisting her is a fierce bald eagle (the national bird of the United States) carrying arrows and a thunderbolt (reminiscent of the arrows carried by the eagle in the Great Seal of the United States). 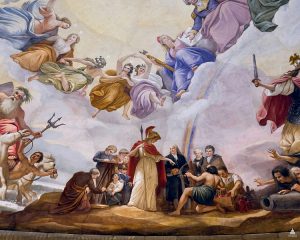 Minerva, the Roman goddess of crafts and wisdom, is portrayed with helmet and spear-pointing to an electrical generator creating power stored in batteries next to a printing press, representing great American inventions. American scientists and inventors Benjamin Franklin, Samuel F. B. Morse, and Robert Fulton watch. In the left part of the scene a teacher demonstrates the use of dividers. 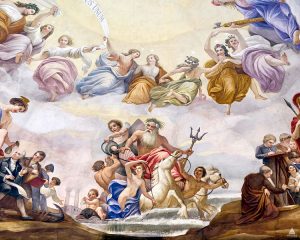 This scene shows Neptune, the Roman sea-god, with trident and crown of seaweed riding in a shell chariot drawn by sea horses. Venus, goddess of love born from the sea, is depicted helping to lay the transatlantic telegraph cable which ran from America to the Telegraph Field in Ireland.[2] In the background is an ironclad warship with smokestacks. 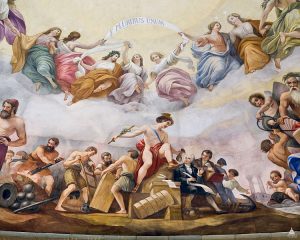 Mercury, the Roman god of commerce, with his winged petasos and sandals and a caduceus, is depicted giving a bag of gold to American Revolutionary War financier Robert Morris. To the left, men move a box on a dolly; on the right, the anchor and sailors lead into “Marine.” 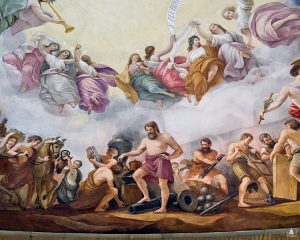 Vulcan, the Roman god of fire and the forge, is depicted standing at an anvil with his foot on a cannon next to a pile of cannonballs. A steam engine is in the background. The man at the forge is thought to represent Charles Thomas, the supervisor of ironwork during the construction of the Capitol dome. 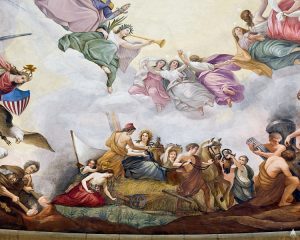 Ceres, the Roman goddess of agriculture, is shown with a wreath of wheat and a cornucopia, symbol of plenty, while sitting on a McCormick mechanical reaper. The personification of Young America in a liberty cap holds the reins of the horses, while the goddess Flora gathers flowers in the foreground.