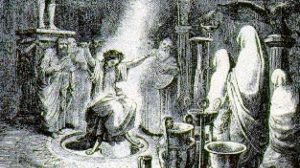 If we take off the cloak of reason and instead clothe with that of madness, we may have the chance to penetrate deeper, more occult realms of the spirit, where essential truths may be revealed to us. At least so thought Socrates. There was however one condition: this madness must be of divine origin. 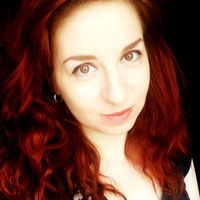 There are more types of sacred insanity in Greek thought:prophetic, ritual, poetic or erotic, all of which are inspired by the gods Apollo, Dionysus, the muses and Aphrodite respectively. But how did the Greeks come up with these beliefs and to what extent can the mental states described  by them be compared to those described in modern psychology textbooks? For this ancient people, there was a difference between divine madness and madness caused by some sort of illness, as Herodotus recount in the story of Cleomenes, who runs amok either because the gods punished him, or because of excessive drinking. It is an old distinction, though not that old, because primitive peoples associate all forms of mental illnesses with divine intervention.

The cause may even be the victims’ allegations that they are in contact with a being of higher order. Menecrates, a physician who lived in the 4thcentury AD thought he was Zeus. Most probably, like many others, he was suffering from epilepsy, considered a sacred disease because it implied the idea of possession, of an attack from the outside. The double personality syndrome may have also led to the belief that the person was authentically possessed, rather than suffering form the intervention of a daemon. The daemon is however responsible for some case epilepsy, paranoia and other mental imbalances.

Works such as The Odyssey are filled with references to the demonic origins of mental diseases, a very common theme in the Homeric age, but in the Classic Age authors tend to draw a line between divine madness and other types. Madmen had an ambiguous status in society:they were generally avoided, but at the same time they enjoyed a great deal of respect, since they were in touch with supernatural forces, a belief that actually never quite disappeared in contemporary Greece as well. In his dialogue Timeous, Plato ascribes to the disease the possibility of a divine manifestation.

Apollo is considered the protector of sacred madness, although there are some researchers who believe that prophetic madness had been unknown in Ancient Greece before the arrival of Dionysus’s cult, if we think about the fact that Apollonian religion rejected ecstasy as a form of revealing experience. On the other hand, the experience was perceived very differently in these cults:the Apollonian ecstasy sought to acquire knowledge of the past or present;whereas the Bacchic one sought to cure mental disease or more commonly, to offer people the opportunity to engage in a collective experience of ritual pleasure as a means of compensation for the order inside the social structure. But Apollo, probably a god of Asian origin, does seem to have been linked to prophetic madness. In fact this link between the capability of foretelling the future or revealing things of the past, may be as old, or even older than the cult of the Sun God.

In the famous sanctuary at Delphi, the prophetic vision was induced when the God possessed the high priestess Pythia, through whom he spoke to the mortals. Some researchers claim that such a prophetic delirium can be explained by reference to a certain quality of the soul that manifests itself only under specific circumstances, such as trance or ritual sleep. Pythia had to be an honest girl of humble origin, lacking an elevated education. Few things are known about her psychological state or about the process undergone to assume her prophetic mission. Her trance might as well have been induced through self-suggestion.

Before the vision she bathed, she drank water from the sacred spring and established a connection to the god using laurel and getting seated on a tripod. By these means she precipitated the self-suggestion process. Some time ago it was thought that her trance was rather caused by inhaling mephitic gases, but diggings at the site did not confirm the existence of any cracks in the cliffs. If at the beginning Pythia may have been in direct contact to the person who made a request, in time her delirium got little to do with the answered provided to the consultant, as it was more than often the result of frauds committed by the Delphic priests. 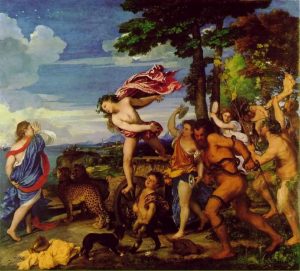 Another type of madness was the ritual one, springing form the mountain dance within the cult of god Dionysus. Its purpose was offering the people the opportunity to liberate themselves of irrational impetus, which if not for the existence of a ritual outlet may have resulted in public crises of hysteria. Dionysus, a popular god, had the power to cancel individual responsibility, to allow people to manifest their subconscious essence, basically to give them freedom without consequence.

The primitive joys ranged from jumping on wine skins to eating raw meat. The individual personality was altered till all social norms were abolished in his mind. It was a cathartic ritual manifested through an orgiastic dance accompanied by equally orgiastic music played on bagpipes or flute. The dancers ran amok because, according to Theophrastus, the most powerful emotions are triggered when hearing sounds. The Bacchic trance resembles the corybantic behavior of the Classic Age.

The Corybantes were priests who served the goddess Cybele and they concocted a similar ritual to cure mental diseases. The malady which the claimed to cure was phobia or the anxiety syndrome. In all cases possession the main issue was diagnosis. If the patient was aware which god is causing his troubles, he could come to terms with him by making proper offerings. Musical catharsis was not strictly limited to those engaged in Bacchic or corybantic rituals, but was also practiced by Pythagoras’ denomination, who also shared the belief that music is beneficial for anxiety.

In order for someone to be capable of creating art, they had to be possessed by the muses. Hesiod mentions that the gift of the muses is poetic creativity, and the gift of Zeus is royalty;in either case we have a divine possession. Poetic work implies a non-human element, it is something that overcomes individual choice, therefore it must be considered a gift, and such a gift can only be divine. This gift comprises more likely the content than the form of the work. Homerus longs to know what to tell, he desires facts, truths about the past that are part of a higher type of knowledge. He knows how to convey the information, he has the necessary skills, but it is the information itself that he cannot provide for himself.

That is why, like the prophet, he is entitled to a divine gift. It is very likely that in earlier times these two professions were unified. The ancient Greek were under the impression that poetry was not a product of the individual ego. What the poet asked for was the truth, although the muses confess to Hesiodus that they can also utter lies, suggesting that perhaps inspiration was nothing more than a mere intervention. The muse played the part of Pythia, and the poet had to interpret the piece of information springing from her ecstasy. Apparently the idea of the artist as an isolated individual, creating his own trance and delirium that help him in the artistic process, finding his inspiration in himself, first occurs in the thoughts of atomist Democritus.

Originally published by Historia under the terms of a Creative Commons license.