Solon’s new constitution was based on ownership of property.

By the early 6th century B.C. social tensions in Athens had become acute, pitting the poorer citizens against rich and powerful landowners. Many citizens were reduced to the status of share croppers, and others had actually sold themselves into slavery to meet their debts. To resolve the crisis the Athenians appointed Solon as archon (magistrate) to serve as mediator and lawgiver. Plutarch and Aristotle describe in some detail the constitution devised by Solon, who then went into voluntary exile to avoid being pressured into amending this legislation.

Solon canceled most debts and freed those Athenians who had been enslaved, but he refused to redistribute property or to deprive the aristocracy of most of the political power. As he tells us in his own words:

For to the common people I gave as much power as is sufficient,
Neither robbing them of dignity, nor giving them too much;
and those who had power, and were marvelously rich,
even for those I contrived that they suffered no harm.
I stood with a mighty shield in front of both classes,
and allowed neither of them to prevail unjustly.
(Plutarch, Life of Solon 18.4)

Solon’s new constitution was based on ownership of property. This notion of political rights or citizenship depending on property is one found in many societies until relatively recent times. All the people were divided into four classes, and political power was distributed among them.

This included those whose land produced at least 500 medimnoi (measures) of grain a year which equals 730 bushels. These were eligible for the highest offices. 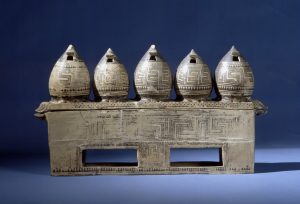 Athenian (Attic) Geometric chest with five model “granaries” on the lid, mid-9th century B.C. H.: 0.253 m. Athens, Agora Museum P 27646. This unusual chest comes from the same burial as the jewelry described earlier. The five cone-shaped objects on the lid have been identified as model granaries and may refer to the woman’s status as a member of the highest class, the landed aristocracy designated by Solon pentekosiomedimnoi, whose land produced 500 medimnoi (measures). Each of the five granaries would thus represent 100 medimnoi. Both the chest and the granaries are decorated with meander patterns, a favorite Geometric ornament.

This included those who could afford the expense of maintaining a horse and whose property produced 300 medimnoi a year. 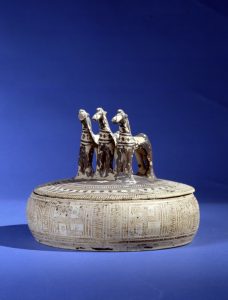 Athenian (Attic) Geometric horse pyxis (box), mid- 8th century B.C. H.: 0.16 m. Athens, Agora Museum P 5061. This round box has three horses on the lid. Ownership of horses required a certain degree of wealth and allowed the man who owned them to assume a role in defending the city as a member of a fighting cavalry, the knights. Thus, horses became a status symbol and sign of wealth.

This included those who maintained a pair of oxen for plowing and whose land produced 200 medimnoi a year. 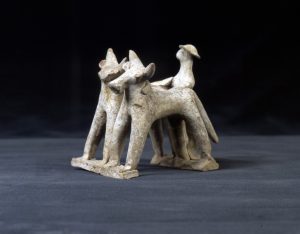 Terracotta figure of a pair of oxen driven by a man, 6th century B.C. H.: 0.10 m. Athens, National Archaeological Museum 18876. This image stands for Solon’s third class of citizens, the zeugitai, who could maintain a pair of oxen for plowing and who served as heavy-armed infantrymen in time of war.

The thetes or common laborers 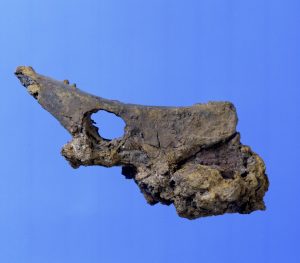 Iron pick, date uncertain. Preserved L.: 0.127 m. Athens, Agora Museum IL 1287. Such a pick might have been used by a member of Solon’s lowest class, the thetes, or common laborers.

All other native-born citizens now possessed an important and basic right: they could not be enslaved by their fellow citizens. As early as the time of Homer, to be a thete was regarded as only just above a slave: “I would rather follow the plow as thete to another man, one with no land allotted to him and not much to live on, than be King over all the perished dead” (Odyssey 2.489-491). Members of this lowest class were not allowed to hold office, but were given the right to sit and vote in the assembly and to sit as jurors in the lawcourts. Over time this last right became exceedingly important.

An important concept clearly laid out for the first time in Solons political poetry is the notion that political participation was the duty of the citizen, not just a privilege to be exercised or not as one chose:

He saw that the state was often in a condition of factional strife, while some of the citizens were content to let things slide; he laid down a special law to deal with them, enacting that whoever when civil strife prevailed did not join forces with either party was to be disenfranchised and not to be a member of the state.
(Athenian Constitution 8.5).

While Solonian reforms did not establish democracy, they were a crucial step on the Athenian road to democracy. Solons constitution, consisting of moderate redistribution rather than a revolutionary transfer of political power, nonetheless granted important rights to the lowest class of citizens.

This middle course pleased no one, as he himself tells us:

Wherefore I stood at guard on every side, A wolf at bay among a pack of hounds. (Athenian Constitution 12.4).

Within a generation of Solon’s reforms, factional strife among the powerful families led Athens once again to the brink of civil war, setting the stage for the next phase of Athenian political development.