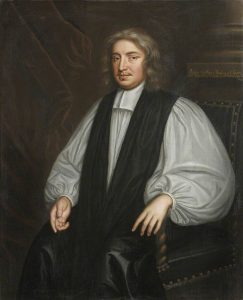 Whatever you could say about Dr. John Wilkins, he definitely thought big.   Big enough, in fact, to make him a pioneer in space travel, not that he ever got that far.

Born in England in 1614, he completed his studies at Oxford and graduated with a B.A. in 1631 and an M.A. in 1634.  Like many intellectuals of his time, Wilkins trained in both theology and natural philosophy (including intensive study in astronomy under John Bainbridge).   After being ordained as a vicar, he quickly became dissatisfied with life as a country cleric and secured a series of posts as chaplain to various prominent nobles, including a nephew of King Charles I.   Marrying a sister of Oliver Cromwell,  John Wilkins attained a prominent position in high society and became Master of Trinity College, Cambridge.  While he lost this position following the Restoration,  Wilkins managed to recover somewhat although he was still devastated by the destruction of his library and laboratory in the Great Fire of London in 1666.   From 1668 onward, he served as Bishop of Chester.   John Aubrey described him as a “a lustie strong-grown, well-set, broad-shouldered person, cheerful and hospitable;  no great-read man, but one of much and deep thinking, and of a working head; and a prudent man as well as ingeniose”.

Still, it was John Wilkins’ achievements as a natural philosopher and an author that really distinguished him.   As one of the founding members of the Royal Society (including acting as one of its two secretaries), he interacted with some of the most prominent scientists and intellectuals of his time.   It is his 1668  book, An Essay Towards a Real Character and a Philosophical Language, that is best remembered.  An ambitious work, Wilkins proposed no less than a universal language to aid communication among scholars of different lands (although he also intended it for use by diplomats and travellers as well).   Recognizing that units of distance and time were arbitrary, Wilkins proposed a universal system of weights and measure based on rational terms (and predating the metric system by more than a century).  Since pendulums were known to be extremely reliable time standards, Wilkins worked out a system using pendulums to measure time down to the second.    He also worked out a standard of length he called, naturally enough, a “standard” which was remarkably close to the length of the metre that would be adopted by as a unit of length by the French National Assembly in 1791.

John Wilkins’ other achievements were extraordinary as well.   Visitors to his rooms at Wadham College could see his marvelous collection of inventions, including the first airgun, an inflatable bladder (a precursor to the pneumatic tire), an artificial rainbow machine to entertain guests, a way-wiser (an early pedometer), and a statue that “spoke” through the use of a speaking-tube.    Along with his inventions (almost all of which were destroyed in the Great Fire) and assorted writings on philosophy, mathematics, and cryptography, John Wilkins distinguished himself by planning the first lunar expedition.

I did say he thought big. 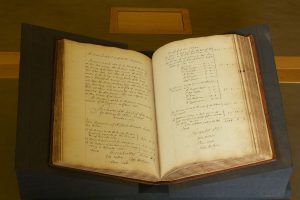 Wilkin’s signature as Secretary, signing off the 1667 accounts of the Royal Society, from the minutes book from meetings held on 30 May 1678 and 6 June 1678 / Royal Society Library, London

Inspired by the age of exploration and the expeditions of Christopher Columbus, Francis Drake, and Ferdinand Magellan, John Wilkins was intrigued by the possibility of traveling through space.   In his first book, The Discovery of a World in the Moone, written when in 1638 when he was only 24,   Wilkins raised the possibility that the Moon and other planets were inhabited.   He justified this outrageous claim by stating that “Now if our earth were one of the Planets (as it is according to them) then why may not another of the Planets be an earth?”.    Recognizing the enormous challenges in meeting the inhabitants of the nearest planet, the Moon  (he called these hypothetical moon-dwellers Selenites),  Wilkins dedicated the rest of the book to how humans could travel through space.     Given that the book came out 50 years before Isaac Newton’s Principia Mathematica in 1687, Wilkins’ speculations on how to escape the Earth’s pull were largely based on Aristotelian concepts concerning gravity and mechanics.

Reasoning that gravity was simply a form of magnetism, Wilkins suggested that reaching an altitude of 32 kilometers above the Earth (20 miles) would be enough to overcome Earth’s pull due to what he termed the “sphere of magnetic virtue” that surrounds our planet.   Since he had no idea of the vacuum between planets, he suggested that the trip could be made with a  true flying machine, designed like a sailing ship but with clockwork gears and a set of wings.    The wings would be covered with swan or goose feathers and would be powered by an internal combustion engine using gunpowder.  He even drew up an elaborate set of plans for the proposed ship and suggested that it could be constructed by a good blacksmith for approximately 400 British pounds.  Even allowing for inflation, this seems quite a bargain considering what NASA would eventually spend on the Apollo project.

Wilkins made no allowance for food on his proposed lunar mission since he knew that explorers could go without food for extended periods of time.  He suggested that, since the ship’s crew would be free of the pull of Earth’s gravity, they would feel no hunger as gravity would no longer be pulling on their digestive organs.   He also made no provision for oxygen although he was aware that mountain climbers experienced breathing problems at high altitudes.   According to Wilkins,  this was due to mountaineers being unused to the “pure air breathed by angels” and that lunar travelers could learn to adapt in the same way that people living at high altitudes did.

John Wilkins actually attempted building an experimental flying ship with fellow enthusiast, Robert Hooke, in 1654 using Oxford’s Wadham College garden as a workshop.  It’s hard to say how far Wilkins’ experiments would have gone before new developments overtook him.   By the 1660s, both Robert Hooke and Robert Boyle  had used their research into the nature of gases to establish the existence of vacuum  between the planets.    Although Newton’s reconceptualization of gravity still lay in the future, enough experimental work had already been done n for Wilkins to grudgingly realize that gravity and magnetism were not the same thing.   After realizing how difficult space travel actually was, Wilkins eventually gave up his dream and moved on to other things.

Along with his scientific achievements, John Wilkins was also a dedicated clergyman whose moderate policies helped curb the intolerance that religious minority groups often faced during that era.  While his assocation with Cromwell still worked against him, Wilkins had managed to become a favourite of King Charles II.  This helped his negotiations with different Presbyterian factions and brought various defrocked ministers back into the Church of England, many of whom had been jailed for their dissent.    Still, considering the unpopularity that religious dissidents faced, standing up to the religious majority was certainly brave.   Wilkins also crusaded for penal reform (another unpopular cause at the time).

John Wilkins died in 1672 when he was only fifty-eight.     Although not as well-known as other scientific figures of his time,   his legacy as a founding member of the Royal Society,  a voice for religious tolerance, and  his various contributions to later science were still immense.    One of the numerous tributes for Wilkins and his scientific work came from Robert Hooke who wrote that “There is scarce one invention, which this nation has produced in our age, but it has some way or other been set forward by his assistance. … He is indeed a man born for the good of mankind, and for the honour of his country. in the sweetness of whose behaviour, in the calmness of his mind, in the unbounded goodness of his heart, we have an evident instance, what the true and primitive unpassionate religion was, before it was soured by particular factions.”

One interesting footnote:  Some of the telemetry for the Apollo missions was handled from the Jodrell Bank Observatory in Cheshire, England.  Not that far from the Oxford campus where John Wilkins first dreamed of lunar travel centuries before.