This bird of prey travelled a long way, from ancient Egypt to Rome to the medieval bestiary, before landing in the U.S.

Most Americans are familiar with the symbol of the eagle. We see it on the backs of dollar bills and quarters, mounted on the podium during presidential speeches, and even representing sports teams. Where did this pervasive imagery come from? The Founding Fathers chose the bird to represent our country in 1782, but eagle imagery can be traced back much further back in time than that.

From Egypt to Rome

Traits we commonly associate with the eagle, such as strength, shrewdness, and leadership, emerged in ancient Egypt over 4,000 years ago. The Romans appropriated eagle imagery when they conquered Egypt in 300 B.C. They may have mistaken portrayals of Egypt’s patron deity Horus, who took the form of a falcon, for an eagle. At his birth Horus was thought to have flown to the heavens and brought back light to a kingdom full of darkness, a feat that made him the symbol of an ideal ruler. The Romans incorporated this symbolic meaning into their own culture; in 107 B.C., Roman general Gaius Marius designated the eagle as the emblem of the Roman army, presenting Rome as the ideal ruler in the global sphere.

Roman author Pliny elaborated upon the characteristics of the eagle in Natural History, commenting on its keen eyesight and parenting behaviors. The eagle, he said, would force its newborn children to look into the sun, throwing any child that looked away out of the nest. 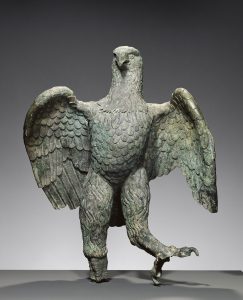 A Bird with a Christian Moral

Nearly 300 years later, an unknown author incorporated Pliny’s observations on the eagle, along with various other sources, into a book known as the Physiologus. Aimed to help teach Christian morals, the book compiled both real creatures and fantastic beasts, from ants to unicorns, and presented them in a biblical context.  The book’s influential stories were passed down over generations, becoming the basis for the medieval book of beasts known as the bestiary.

The bestiary version of the story relates that as the eagle ages, its wings grow heavy and it begins to go blind. To restore its youth, the bird flies into the atmosphere of the sun, scorching off its old feathers and tired eyes, then dives three times into a fountain, emerging fully renewed. This is likened to those who are blind to the word of Christ and must bask in his light and plunge into the spiritual fountain of the Lord to be born again. 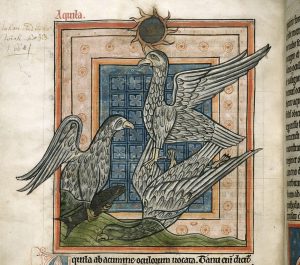 The King of Birds

With its intense glare, killer claws, and impressive wingspan,  it’s not surprising that the eagle it is regarded as the king of birds. Consistently depicted first in the bird section of medieval bestiaries, the eagle was likened to Christ, the divine king, and in this way continued to serve as the symbol of an ideal leader.

The eagle’s keen eyesight was likened to Christ’s all-seeing divine power. Its acceptance of the child who looks into the sun, and rejection of the one who does not, mirrors Christ’s acceptance into heaven of those who bask in the light of the lord, and banishment to hell of those who turn away from religion. For this reason, the eagle is often depicted with a crown or halo, visualizing its connection with Christ and his position of leadership.

Although the eagle was a prominent symbol before the Physiologus and medieval bestiaries, its adoption into the symbolism of a major religion allowed for widespread diffusion across many different cultures and regions. Thanks in part to medieval bestiaries, which were used for religious instruction, the eagle as an emblem of a perfect leader would have spread quickly throughout the Christian community. After hundreds of years, most Christians, our Founding Fathers included, would have been very aware of the eagle’s meaning. 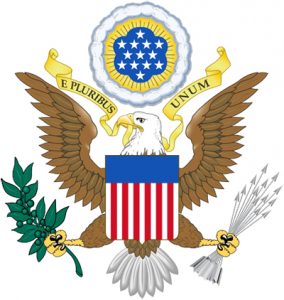 When the Founding Fathers gathered at the Continental Congress of 1782, it is no wonder that they landed on the eagle as an emblem of America; it invoked both the supreme military and political power of the Roman Empire and the divine power of Christ.

The eagle clutches an olive branch in its left talon, just like the branch the dove clutched in its beak as it returned to Noah’s ark, signifying perpetual peace. In the right talon lies a bundle of arrows, signifying military might associated with the Roman army. So next time you take out your wallet, blast “Hotel California” by the Eagles, or catch up on NFL football, think about just how far that symbolism has traveled before landing in your pocket,  headphones, or television set.

Hayes, Justin S. “Jupiter’s Legacy: The Symbol of the Eagle and Thunderbolt in Antiquity and Their Appropriation by Revolutionary America and Nazi Germany.” Vassar College: Senior Capstone Projects 261, 2014.