Foxes, sneaky and sly, will trick you into devil worship.

The fox has long been known as a wily creature. Its mischievous nature was noted in the Physiologus, a compendium of creatures from the second century AD that laid the foundation for a later type of manuscript known as the medieval bestiary. The fox is described as an animal that never runs in a straight line and remains always elusive. It plays dead until its victims approach, at which time it ferociously strikes.

The bestiary describes the fox as the devil, who pretends to be dead to those not committed to Christ. The unfaithful learn his true nature only when it is too late, and the devil already has them within his jaws. The moral? The devil is truly dead only to those with an unconditional commitment to God.

The various creatures and associated morals of the bestiary served as a teaching tool in the European Middle Ages. Most bestiary stories taught a Christian moral, usually involving a lesson about following a Christian path and a warning about the dangers of a lapse in faith.

As generations of illuminators copied paintings of animals in earlier books, bestiary manuscripts developed a “standard” pose for the fox. Readers would see the fox depicted in the pose found in other bestiaries and immediately recognize the lesson. A red, doglike animal, the fox is typically depicted either lying on its back with birds flocking above it, or standing with a meal already in its mouth.

The sly nature of the fox is given a Christological moral in the medieval bestiary. The fox, much like the devil, uses trickery to attract followers. When the fox is hungry and cannot find anything to eat, it rolls in red mud to make itself look battered and bloodied, then lies on its back to appear dead. This maneuver tricks other hungry animals, often birds, to pick at its remains. Once the birds are close, the fox snatches one up for dinner.

The image below, from the Rochester Bestiary in the British Library, shows two scenes of the fox: one performing his trap, and the second after he has captured his meal. The lesson? Avoid the temptations of the devil and follow God’s word. If you harbor doubts about God, the devil will draw you into temptation—and you’ll be in his maw in no time. 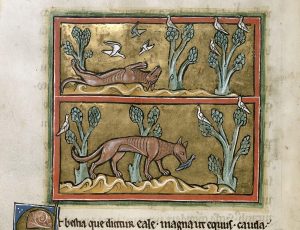 The tale of the fox was well known in the European Middle Ages, and contributed to the conception of the characters in a popular fable known as Reynard the Fox. The main character is a sly fox called Reynard, who talks himself out of difficult situations and takes advantage of other animals with human traits. (This story of the fox as trickster was likely the origin of the French word for fox, renard.)

At one point in the fable, the king (presented as a lion) sends a bear to retrieve Reynard to answer for his crimes. Reynard tricks the bear, named Bruin, into eating honey from a beehive in a farmer’s tree. Bruin gets his head stuck in the tree and cries out, drawing the attention of the farmer, who approaches with a sharp hook. Hearing the farmer, Bruin yanks his head out, leaving his skin and ears in the tree. Blood running onto his face from his wounds, Bruin now faces a few foul strokes from the farmer’s sharp hook. The bear returned to the king without Reynard and now with a new complaint.

Many of us are familiar with specific attributes tied to animals—such as the sneaky fox—but don’t realize why we think of animals as having these qualities. The answer often goes back centuries, to the bestiary and the fables that derive from them.