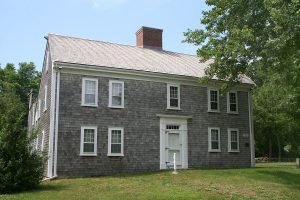 Was Puritan New England the “cradle” of America?

Puritan New England has long been given priority as a model for the development of America as a whole. There are a number of possible reasons for this regional prejudice. For one thing, historians have simply found it easier to research colonial New England because of the abundance of written sources that were created and have survived there. Additionally, the image of Pilgrims and Indians sitting down together at the first Thanksgiving meal makes a more comforting foundational moment than the messy first years at Jamestown, marked as they seem to have been by sloth, greed, and starvation.

The Puritans’ perception of their having been chosen for divine purposes, it has been suggested, also meshes well with America’s sense of manifest destiny, which was not just a geographical expansion, but also a moral one. And of course, the shadow of the Civil War casts itself over the whole question, making it tempting to write the South and its defense of slavery out of the mainstream of national development. This view assumes that the South was always hostile to economic innovation and forgets that slavery also existed in colonial New England.

Therefore, the idea that New England was the cradle of America is composed of different interlocking arguments. Prying them apart, we can ask the following questions:

One historian, Jack Greene, in his book Pursuits of Happiness, makes an argument against the exclusive use of New England as a model of development for later American history. Greene argues that it was precisely to get away from the conditions marking contemporary England that Puritans emigrated in the first place. Their gathered churches, egalitarian society (compared to England), and their rejection of the market economy were all in contrast to developments in England. (1)

As research is now showing, English society at this time was much more mobile than previously thought, and was not composed of stable, static rural communities. (2) Agriculture in England was increasingly a commercial venture, dominated by large landowners who depended on tenants and wage laborers. For those who controlled their own smallholdings, the nuclear family composed of parents and children was not the unit of production, as it was in New England; rather, children were typically apprenticed out, and households employed other laborers. Laborers and apprentices were often involved in nonagricultural pursuits, notably the cloth industry. (3) English society, then, was open, competitive, stratified, and acquisitive, all of which makes New England seem much less English than its name might imply.

Looking at the question from the perspective of the colonial Chesapeake (specifically Jamestown), settlers both brought with them from England and maintained in the New World attitudes and values regarding family, community, work, order, and religion. (4) In addition, by the 1630s the Chesapeake was not the chaotic and divided society often depicted. Political stability had been achieved and community networks had been created despite dispersed settlement patterns. (5) Other historians have noted that despite the lack of personal religious inclinations on the part of individual settlers in Virginia, the colony was founded with religious goals at the forefront, and that the ethos behind these was essentially Puritan. (6)

All of this takes away from New England’s place of primacy as either most English or most unlike other colonies. At the same time, it has been argued that New England did lack traits that other colonies—as well as the later United States—exhibited. It was, for example, much less ethnically diverse than colonies founded later in the 17th century. The Middle Colonies with their Dutch, German, Scotch-Irish, Welsh, Swedish, and Jewish settlers, and even Carolina with Huguenots, Highland Scots, Jews, and a large population of enslaved African Americans offer a better foretaste of the future multiethnic America.

The varying trajectories of the colonies all offered patterns for later American development, and the issue of originary myths did not begin with modern historians, nor even with the Civil War. In the quest for a national identity following the Revolution, each region articulated its own vision and insisted on its own importance to the development of the American character. New Englanders saw their regional characteristics of piety, industry, simplicity, and democracy as essentially American, but felt they were not shared by Southerners due to the widespread institution of slavery. This self-image came to be adopted by other Northern states, and because of migration by New Englanders to Western territories, it was spread there as well. (7) The South was in effect outflanked in its claims to be the repository of American ideals. It is for modern historians to look beyond these regional prejudices and adopt a more nuanced and inclusive view of the formative influences of the American past.