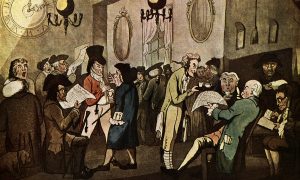 William Lloyd’s Coffee House in London specialized in being the first in getting marine news, such as arrivals and shipwrecks. Merchants and traders profited from the transatlantic slave trade before abolition, not only in the buying and selling of slaves, but also in the whole marine business of ship insurance and mortgages to sea captains. / Illustration by Bettmann, Getty Images

Centuries before Starbucks, coffeehouses like the London Coffee House served as de facto organizers of financial markets in port cities on both sides of the Atlantic. 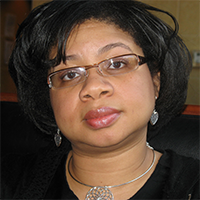 Centuries before a green-and-white mermaid logo became synonymous for lattes and free Wi-Fi, coffeehouses like the London Coffee House served as de facto organizers of financial markets in port cities on both sides of the Atlantic. People were lured by caffeine, of course, but moreover by the open exchange of ideas and the chance to mingle in elegant but affordable comfort. These English-style coffeehouses became “really important to the development of capitalism [in] London [from] the 17th to 19th century,” says Markman Ellis, author of The Coffee House: A Cultural History. During that period, the legendary London financial infrastructure was still forming. “People would go to a particular coffeehouse in order to meet a particular kind of merchant” who specialized in procuring the goods or capital for that industry, says Ellis.

For example, William Lloyd’s Coffee House in London specialized in being the first in getting marine news, such as arrivals and shipwrecks. Maritime businessmen met there with ship operators to arrange the trading of cargo and invest in future voyages. Merchants and traders profited from the transatlantic slave trade before abolition “not only in the buying and selling of slaves,” Ellis says, but also in the “whole marine business of ship insurance and mortgages to sea captains.” This commerce network sparked the creation of Lloyd’s of London and helped other businesses across Britain, such as Barclays prosper.

In the Cornhill section of London, there were coffeehouses that connected people with interests in the particular colonies, such as the Virginia Coffee House and the Jamaica Coffee House. Traders, bankers, and Lloyd’s merchants also met in coffeehouses in Bristol, England, to enrich themselves with profits from over 2,000 slave ships processed in that city between 1698 and 1807. It’s not surprising then that English-style coffeehouses spread to the British colonies very early, says Ellis, although there were fewer of them. There was one in Boston before there was one in Paris, he adds.

“[In the colonies], as the coffeehouse world is emerging, you don’t have large scale commercial banks to the same extent that you have [them] in the 19th century,” says Edward Baptist, scholar and writer of The Half Has Never Been Told: Slavery and the Making of American Capitalism. This scenario “means that the movement of capital in many cases is individual-to-individual, across mercantile networks that are knit together by relationships and family networks,” Baptist explains. While there was no real aristocracy in the colonies to navigate, coffeehouses became a “transition point” to connect people, “allowing erosion of the traditionalist grip on both politics and the economy of the Atlantic world.”

“From the 16th through the 19th century, the use of enslaved people’s bodies, futures, and families, the exploitation of their own hopes [was] everywhere and constant” in the economic system, says Baptist. Slavery-based commerce—and not just slave ownership—allowed Northerners and other people outside the plantation system to partake in the immense financial profits from slavery. Coffeehouses—a great place to connect goods and capital streams with seekers—facilitated the very aspect of slavery that amplified capitalism. “[In this system], enslaved peoples’ bodies are not only bought and sold, but made into part of these processes of credit and more rapid flow of finance,” Baptist says.

William Bradford opened his London Coffee House (there was an earlier one) in Philadelphia in 1754 at the corner of Front and High (now Front and Market) with funding from 200 merchants who wanted a place to assemble. Nearly 40 years later, just 100 miles away, the New York Stock Exchange was launched by merchants and traders in the Tontine Coffee House at 82 Wall Street. Shipowners registered their vessels with the exchange, and a monetary value was assigned to their freight, including the living cargo from Africa. “The aspiration of the city’s founders was to be the leading slave trading port in the Americas,” says historian Leslie Harris. At its height of activity in the Triangular Trade, New York City lagged only behind Charleston, South Carolina, in number of imported enslaved Africans.

“When we think about the end of slavery in the North, it is important to note that in New York and Philadelphia, no slaves were freed by abolition laws,” says Harris. Rather, formerly enslaved and those born to them continued to be bought and sold as indentured servants for years after legislation was passed. Indentured or freed Blacks could have also worked in the coffeehouses. After emancipation, however, they were kept out of the jobs they once performed because they were seen as competition by the White working class.

Today, the global coffee chain Starbucks markets itself too as a public space. But for whom? Like the drinking houses of prior centuries, the company touts an “all are welcome” policy, but their atmosphere, as well as the price and type of drinks on the menu, and discrimination by some employees, may imply otherwise.

The modern coffeeshop, for many, represents a more conducive working space than the cubicle system. But in the likeness of its predecessor, it doesn’t seem to be intended for all of us to experience it in the same way. “Capitalism rests on the work, endeavors, and exploitation of non-White people,” says Baptist. “And so does some of the assumptions about who gets to participate in what level of the economy, who gets to make decisions, and who gets to move in those kinds of innovative spaces.” He continues: “Those ideas seem in some cases to be very deeply cemented into many folks’ understanding of who capitalism is for.”

According to Baptist, the emergence of public spaces such as English-style coffeehouses is seen as a democratizing process. These establishments, despite their role in the commerce of slavery, provided people across social classes—originally White men, but later people of color and women—with places to launch revolutions. In addition to American colonists, some abolitionists organizing in 1790s London, such as Olaudah Equiano, “valued the openness of the coffeehouse to all kinds of people” and chose to use these spaces instead of private homes or religious edifices, says Ellis.

Twenty-first-century Philadelphia has Black-owned coffeehouses, in the tradition of those abolitionists, running quiet radical movements of their own.

Arielle Johnson, owner of Amalgam Comics & Coffeehouse, may have lacked the access to capital that William Bradford, Starbucks’ founders, and others had, but she has leveraged her personal savings, city grants, and other innovative financing solutions to launch her business. Now one of the most popular comic book establishments in the country, Amalgam has become an alternative to the traditional “White, hetero-normative spaces,” she says.

While companies like Starbucks step up to address historical social ills, there are other emerging spaces that welcome everyone.

Johnson says, “[We] support and highlight the voices of people of color and LGTBQ, as well as professional and business development opportunities.”