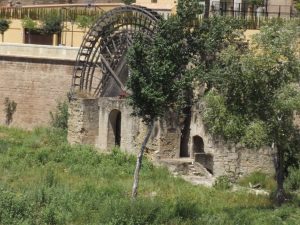 We may assume too readily that the Romans, lacking the fuels which power the modern world and the sophisticated technologies which have harnessed water, had only a feeble command of energy, but we would be mistaken. Archaeology and historical research have long since shown that the Romans—masters of architecture and military technology—were also skillful exploiters of many natural resources which they transformed with heat, light and power…

This vast empire, stretching at its height from the British Isles to the Middle East, could not have been attained without an efficient use of energy in all its forms—wind power, water power, and combustion of wood, coal and oils. This feature highlights the energy sources and technologies that enabled Romans to import grain from Egypt, silks from China, cook, heat and light homes, power their workshops and coin stamping mills, and operate pumps to remove water from mines.

The Romans used water power to grind corn, cut wood, make music and even tell the time. For instance, the flour mills of Barbegal in southern France and those on the Janiculum in Rome, relied on water power and were described by Vitruvius in his De Architectura of 25 BC and mentioned by Pliny the Elder in his Naturalis Historia of 77 AD. There are examples of surviving Noria waterwheels near Toledo and Cordoba in Spain, which lifted water from the river into small aqueducts for distribution to nearby settlements. These waterwheels were commonplace where rivers and settlements were in proximity.

Roman Watermill Made with Lego Bricks

Archaeological evidence from the Longovicium military base near Durham, England, suggests that watermills were also used for forging iron products. In Rome, water was used to power clocks and even with special organs to create music. It is said the Emperor Nero was an accomplished water organ player, reports Suetonius in The Lives of the Caesars. A modern example of a water organ can be seen in the Croatian port town of Zadar.

Hydraulic mining was a technique in which streams or waves of water are released onto a hillside to reveal any gold-bearing ore.

Hydraulic mining, a technique in which streams or waves of water are released onto a hillside to reveal any gold-bearing ore, was a roman technique. Rock debris could be sluiced away by hushing, and hard rock and veins could be broken by a combination of fire-setting and dousing with water, as well as by crushing or stamp mills, powered by water wheels. Alluvial gold deposits could be extracted and washing tables, fitted below tanks, collected any gold dust and nuggets. Pliny the Elder provides a detailed description of gold mining in book xxxiii of his Naturalis Historia, an account which has been confirmed by both archaeology and the remains at Las Médulas in northwest Spain, which is considered to be the largest opencast goldmine of the Roman Empire. Deep mining relied on water power to remove waste debris and power primitive machines to wash and crush ore in partnership with human and animal labor provided by horses and oxen.

The use of wind to drive a wheel to grind corn, pump water and power sailing vessels was commonplace in Roman times. The wind wheel, the invention of Greek engineer, Heron of Alexandria in the First Century, is the earliest known instance of using a wind-driven wheel to power a machine and was well known to the Romans. Boats, equipped with Lateen or Spritsail canvas, were powered by wind and transported predominantly grains, wine, olive oil and people around the empire. The economics of long distance water-borne carriage for bulky and heavy goods compared with overland carriage were recognized long ago. Historical records indicate that some 1,200 large merchant vessels reached the port of Ostia every year (about five per navigable day).

Apart from water and wind power, the Roman Empire also used a mix of fossil fuels and biofuels for manufacturing and domestic uses such as cooking, heating and lighting.

While the Roman empire encompassed huge reserves of wood in its northern territories, the difficulties and cost of transport limited its use. Where possible, wood was floated down rivers to major urban centers. Using land transport was, even then, costly. Diocletian’s Price Edict states that a wagon load could carry some 1,200 pounds of wood at a cost of 150 denari. The maximum freight charge per mile for the same wagon load was 20 denari per mile—a not inconsiderable sum—and taking into account wood’s low caloric value in relation to weight, rather expensive. However, archaeological evidence indicates use of more energy-packed charcoal (the solid residue of burning wood in a pit or kiln) in the manufacturing of glass and metals.

The use of coal to heat homes, workshops, public baths and for smelting iron was confined to areas where it was available and easy to mine. Archaeological remains have shown coal being used in settlements and forts in Britain and in Rhineland locations. A case in point is the armory at Longovicium (or Lanchester Roman Fort) near Durham in North East England. However, for much of the empire, especially around the Mediterranean, there was little in the way of accessible coal.

Wicks floating in a small pool of crude or olive oil contained in a hand-held clay or glass oil lamp were used to light premises throughout the empire and have been found in excavations of Second Century AD homes. In addition, oil is thought to have been used in making of incendiaries, such as Greek fire for filling in grenades.

Did all these technologies vanish with the Roman Empire? The answer seems to be “No,” for the imperial command of resources and skills moved eastward, to Constantinople and the long-flourishing communities of the eastern Mediterranean.