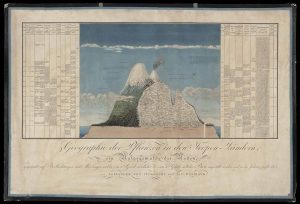 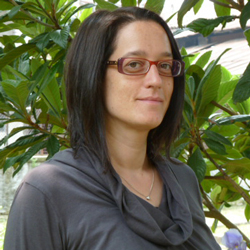 While traveling through the Latin American colonies from 1799 to 1804, the Prussian naturalist Alexander von Humboldt (1769–1859) became the first to see nature not simply as a suite of individual elements to be classified, but rather as a web of components to analyze and study in their interrelations. In doing so he developed the concept of Naturgemälde, which posits that nature is a unified, interconnected web, and began to create a consciousness via his beautifully articulated “drawings” that apprehends nature as something humans have been capable of manipulating, leading to destruction and harm.

If nature was a web of life, he couldn’t look at it just as a botanist, a geologist or a zoologist. He required information about everything and from everywhere, because “observations from the most disparate regions of the planet must be compared to one another.” Humboldt amassed so many results and asked so many questions.(1)

Some of these results and questions led von Humboldt to ideas that were ahead of his time, including arguing that humans are responsible for altering the earth’s environment, anticipating the concept of what we now call climate change. (His understanding of nature as a web of life also indirectly sparked the curiosity and desire to travel in another major naturalist: Charles Darwin, who developed the theory of evolution.)

Although cities had not been the focus of his trip to the colonies at the turn of the nineteenth century, von Humboldt observed how colonialism was tearing apart natural landscapes and causing disruption in the name of so-called development.

Would it have made a difference to the development of cities if his ideas were taken into consideration during of urban environments? In light of the Getty Research Institute exhibition The Metropolis in Latin America, 1830–1930, which examines the rapid urban growth of six major cities in Latin America—Buenos Aires, Havana, Lima, Mexico City, Rio de Janeiro, and Santiago de Chile—I imagine here what some of these cities might have looked like had Naturgemälde been an influence on their development.

As Latin American colonial cities transformed into postcolonial republican capitals, sparking further growth and development, urban planners were faced with the need to “organize nature”—to restrain and govern it. Often referencing French urban planning strategies, nature in these cities was organized in deference to architecture and infrastructure: lines of tree were planted along boulevards, water was channeled along river banks, mountains were tunneled to allow movement via roads and pipelines and ocean channels were cut to allow ships shortcuts to their commercial routes. 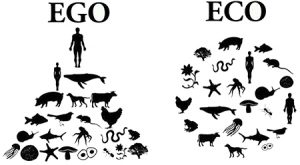 The building of urban infrastructure and other more majestic projects became synonymous with development and modernity, while nature was tamed and relegated to a merely decorative element within a city’s boundaries. Von Humboldt’s “web of life”—the interrelated nature of flora and fauna that supports their mutual robustness—was destroyed.

Collectively and over time, humans have ushered in a new epoch defined by our destructive power: the Anthropocene. But today many people recognize the danger of the actions initiated by early colonists. We now realize that the subjugation of nature that has been part of urban civilization hinders our role as positive agents acting within the web of life.

It is worth imagining what could have gone differently in the nineteenth-century development of some of the capitals featured in The Metropolis in Latin America, many of which have become megalopolises. For example, what if instead of looking at the technocratic Haussmannian interventions that had shaped European cities, planners in Latin America had found inspiration in the ecological systems of the rain forests and the peaks of the Andes?

Rather than barricading the majestic forces of seafronts (Havana’s Malecón), rivers (Lima’s Río Rímac) or lake basins (Mexico City), what if the republican cities had grown with them and around their unique topographies?

What if Havana’s seafront had embraced the force of the waves during high tides and set back its positioning from the coast? Or if the park on Santa Lucía Hill in the heart of the Chilean capital of Santiago had been joined to the Parque Forestal and Plaza de Armas via La Alameda, creating a system of connected parks? 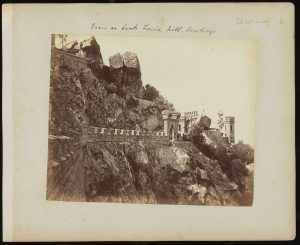 And what if the Panama Canal had never been created: Would commerce have slowed down? Would our oceans still have an abundance of life? Would we have come to survive comfortably with less? Or, with the advent of the World Wide Web and its reach, would we have simply rerouted our desires and consumptions to another level of immateriality? 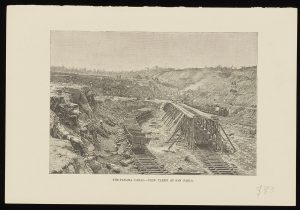 What if Mexico City had remained Nova Mexico—a city depicted in a beautiful engraving circa 1778 showing how the Aztec city was built on an island in Lake Texcoco—with the lake central to its urban-scape? Limiting the city’s growth by adapting it to its geographical boundaries might have avoided the urgent problems of pollution, overpopulation, and strong seismic effects affecting the livability of the megalopolis today. 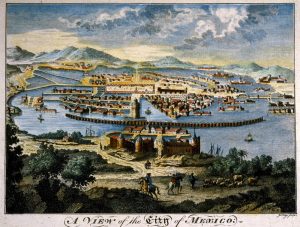 Imagining these alternative scenarios isn’t just an exercise in creative thinking. It provides a framework for how we might plan for our cities in the future. The Metropolis in Latin America illustrates how the history of postcolonial cities remains a poignant, necessary topic of contemporary discourse, not only within the discipline of urban planning but also—indeed especially—in the social sciences and humanities. This exhibition, with its rich material, helps us further our knowledge and open our minds to a world advancing to a new stage of becoming, a world that is increasingly interconnected.