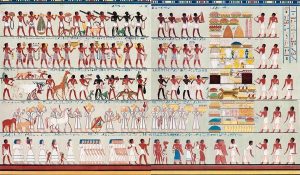 tomb of Rekhmire the vizier, the highest ranking official under the pharaohs Tuthmosis III and Amenophis II (New Kingdom).

Working out how many people lived in ancient Egypt is far from an easy task.

Working out how many people lived in ancient Egypt is far from an easy task. Despite its documentation-rich bureaucracy, dynastic Egypt has not left us anything like a national census that would tell us how many people lived in the Nile Valley and Delta, nor one for any of its major population centres. With a lack of such direct evidence, various estimates of population have been made on the basis of different types of evidence. However, because of the variability of the available evidence, estimates of the total population of Egypt at different periods vary quite dramatically.

The clearest statements of the population of Egypt come from Classical historians writing about the country:

‘It is said that the reign of Amasis was a time of unexampled material prosperity for Egypt; the river gave its riches to the earth and the earth to the people. The total number of inhabited towns, they say, was 20,000.’

‘In density of population [Egypt] far surpassed of old all known regions of the inhabited world, and even in our own day is thought to be second to none other; for in ancient times it had over 18,000 important villages and cities, as can be seen entered in their sacred records, while under Ptolemy [I] these were reckoned at over 30,000, this great number continuing down to our time. The total population, they say, was of old about 7 million and the number has remained no less down to our day.’

‘This country is extended as far as the Ethiopians … it has 7.5 million men, besides the inhabitants of Alexandria, as may be learned from the revenue of the poll tax.’

These accounts are broadly in agreement: 20,000­–30,000 settlements in the period from the 26th Dynasty to the Ptolemaic Period, with a total population of 7–7.5 million (+/- the population of Alexandria). Our confidence in the accuracy of these figures is supported by Josephus’ statement that his population estimate is ultimately derived from poll-tax records. However, the extent to which this figure of between 7 and 8 million can be projected back into the Egypt of Ramesses II, Khufu or Narmer is more than a little problematic.

A method of estimating population based on archaeological evidence, not least in the reconstruction of ancient landscapes, has been attempted by the American geographer Karl Butzer and his figures are the ones most often used as a ‘rule of thumb’. His calculations for a particular period are based on:

Using this methodology, which admittedly relies on some significant guesstimates for both the amount of available land and its carrying capacity at any given period, the major trends identified by Butzer are:

No significant change to the amount of cultivable land, but a higher population density in all areas.

Increase in cultivable land in the Delta (to about 9,000 sq. km, or 3,475 sq. miles) and continued increase in population density in all areas.

Agricultural efforts by Middle Kingdom kings significantly increased the amount of cultivable land and density of occupation in the Faiyum and in the Delta, together with a slight rise in population density in all areas.

Significant increase in cultivable land in the Delta (to about 10,000 sq. km, or 3,861 sq. miles) and rise in population density in all areas.

An alternative approach to the ‘carrying capacity’ method of estimating population is the quantification of the occupied areas of known major settlements. Again, population figures are ascertained by multiplying the size of the occupied area by its population density, but the population density is instead calculated using observations of the urban environment (housing capacity etc.) rather than the food-producing capability of agricultural land. The total urban population can then be extrapolated for any given period. This method, which was also attempted by Butzer, has the advantage of being based on the evidence from identified, known ancient cities, although the assessment of population density within those cities is more problematic.

The 1882 census of Egypt provides a starting point by giving detailed data on the number of settlements, size of settlements and population of those settlements in a country whose population distribution (overwhelmingly rural, with regional centres and one major capital city) might be imagined as being not altogether dissimilar to ancient Egypt from the Old Kingdom onwards. The problem here is in the actual density of the urban settlements – in 1882 six Egyptian cities had a population density as high as 3,000 individuals per hectare, which is probably too high for ancient Egypt – certainly for pre-New Kingdom cities – and Butzer suggests no more than 200 individuals per hectare for Old Kingdom Memphis.

An assessment of known (and assumed) cities and towns, and their likely populations, produces figures for urban populations of 35,000–40,000 for the Old Kingdom, rising to over 500,000 for the Ramesside Period, and about 1 million for the Ptolemaic Period. Butzer compares the figure of 1 million urban Ptolemaic Egyptians with the 7 million total population suggested by Diodorus Siculus and comes up with a proportion of 1:7 for the ratio of urban Egyptians compared with the total population of Egypt. If this figure can be applied to New Kingdom Egypt, Ramesses II would have governed a country of 3–3.5 million Egyptians.

Given the enormous assumptions underlying these figures, and the sometimes patchy archaeological evidence (especially in the Nile Delta), it is hardly surprising that there is no general consensus about these figures. Bruce Trigger put the population of Egypt at the time of unification (3000 BC) as closer to 2 million in contrast with the figure of less than 1 million that was suggested by Butzer; for the New Kingdom Barry Kemp suggests 4–5 million instead of Butzer’s 3–3.5 million.

Estimates for the whole population of Egypt are difficult to produce with any precision. However, estimates of the population of individual settlements should be more accurate, given the more specific evidence that can be employed. However, even these are far from agreed, and depend on whether the whole of a settlement is occupied at a single time, or whether the archaeological remains represent a shifting pattern of occupation, with partial abandonment and partial occupation, as may have been the case at, for instance, Merimde.

The Middle Kingdom town at Kahun is a good example of a reasonably well-preserved settlement with a range of types of evidence that can be used to estimate its population, as attempted by Barry Kemp. The most obvious first source is the number of houses at Kahun – about 500 smaller houses (including those in missing space). If we assume, as a working hypothesis, that each house was occupied by an average of six people at any one time, we can calculate a figure of c. 3,000 for the entire population. However, a far larger figure is reached in another estimate of population, this one derived from the granaries attached to the ‘urban villas’ at Kahun: if these were filled to capacity at harvest time, they would be able to supply grain rations to feed a population of between 5,000–9,000 people for a calendar year. Clearly these methods of calculating population are not going to give us any sort of exact figures, but they are useful in providing a range of potential figures, which can be compared against other types of evidence. 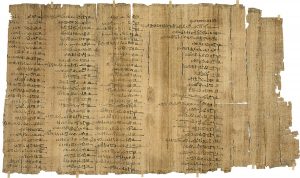 Although once described as ‘nothing more than a list of houses with their owners’, Papyrus BM 10068 is a vital document for understanding the nature and distribution of settlement in late New Kingdom Thebes. British Museum, London.

One of the most important documents for understanding the distribution of settlement at Thebes during the New Kingdom is Papyrus BM 10068. Much of this document deals with robberies from royal tombs that were taking place towards the end of the 20th Dynasty, but it also contains a section dated to ‘Year 12, 3rd month of summer, day 13’, which bears the title ‘Town-register of the West of Niwt [Thebes] from the temple of Menmaatre to the Settlement of Maiunehes’ and contains a list of houses, the names of their owners and the occupations of those owners.

The list begins with ‘the house of the temple of King Menmaatre’ followed by ten further houses, most of which are occupied by priests. It is tempting to see this as a priestly residential cluster of officials associated with the memorial temple of Seti I at Qurna. The next house listed is ‘the house of the temple of Usermaatre-Setepenre’, followed by 14 further houses, which again are mostly occupied by priests – perhaps a similar collection for residences of the professional staff attached to the memorial temple of Ramesses II, the Ramesseum.

It is the third group that is most interesting, again beginning with ‘the house of the temple of Usermaatre Meryamen’ (i.e. the Medinet Habu memorial temple of Ramesses III), but this time followed by 155 houses. The first five are occupied by local high officials, including the Mayor of Western Thebes, Paweraa, and the Scribe of the Army, Kashuti. The remaining 150 houses are occupied by 32 priests of different ranks, but also by a variety of workers, including 12 fishermen, 6 ‘cultivators’, 10 metalworkers, 10 scribes, 6 sandalmakers, 6 gardeners, 3 beekeepers, 4 brewers, 2 woodcutters, 16 herdsmen, 2 goatherds, 6 washermen, 3 potters (or builders?) and 1 physician. This does not look like a skeleton staff attached to a major temple that had seen better days (as seems to be the case with the Seti I and Ramesses II temples listed first), but a real community, with an occupational mix (and evidence of occupational clustering) that one would expect for such a community. 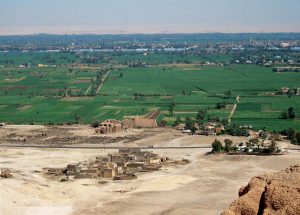 The landscape of western Thebes has not changed greatly since the New Kingdom. The well-defined desert and cultivated land, cut through by the ribbon of river, provide the backdrop for both major temples (the Ramesseum on the desert edge) and the clustered houses of small villages. Rutherford Picture Library.

Although ‘Maiunehes’ is not defined in this text, it is likely that it is the settlement formed by the houses of this real community. As for the location of that ‘settlement’, it has long been noted that a ‘second stage town’ developed within the walls of Medinet Habu, forming a protected community that was the population nucleus of the West Bank of Thebes in the late New Kingdom. We know that Medinet Habu became the home of the ‘demobilized’ Deir el-Medina community after the abandonment of the royal tombs in the Valley of the Kings. It had long been a place of refuge for the vulnerable and isolated Deir el-Medina community from increasing desert raids by Libyan nomads in the later part of the New Kingdom, and had been an administrative centre for the West Bank and therefore the place where striking Deir el-Medina workmen would take their complaints. The ‘villageization’ of the area between the temple and the massive enclosure walls of the Medinet Habu complex should therefore be seen as a natural development for a community living in increasingly uncertain times, seeking both physical and psychological security. It is also unsurprising that this community should continue well into the Coptic Period, at which time it was known as the town of Djeme.