The location of towns and cities in ancient Egypt was dictated by two principal factors.

The location of towns and cities in ancient Egypt was dictated by two principal factors; the behaviour of the Nile and the wishes of the king. Royal influence on the location of settlements was graduated. At one end of the spectrum was the ordering of a completely new ‘royal city’. Amarna is the best example of this, because of the extent to which it has survived in the archaeological record and the detail we have been given as to the reasons behind its creation. The agenda for this particular piece of urban planning survives on the boundary stelae that the pharaoh Akhenaten commissioned as part of the foundation of the city. In this instance, the desire to ‘invent’ a new city in which Akhenaten could pursue his particular religious agenda is an extreme example of royal whim causing the considerable resources of the Egyptian state to be marshalled (and the movement of a significant proportion of the Egyptian population, especially among the elite) to create a new and vast metropolis in a few short years.

Other examples of the creation of cities by royal diktat can be cited; the building of Pr-Ramesses by Ramesses II is one example. Another is the development of Memphis as the major urban hub of Early Dynastic and Old Kingdom Egypt as part of the unification process, although its initial foundation was not directly responsible for its success and longevity – rather, a combination of royal patronage and, perhaps more fundamentally, the fact that it was located at the meeting point of Upper and Lower Egypt set it on the right road to organic growth. Royal encouragement of the development of existing towns and cities can be seen at places such as Thebes where relatively small regional centres were developed on the basis of their connection with the king. In the case of Thebes, its choice as an administrative centre for Upper Egypt and Nubia in the New Kingdom was a side-effect of its being the ‘home’ of the major cult-centre of the predominant imperial god of the New Kingdom, Amun-Re, and the patronage of that cult centre at Karnak by virtually every New Kingdom king (not to mention the establishment of royal burial in the Valley of the Kings), and not the other way round. Secular importance followed religious choice and personal connection to the king. 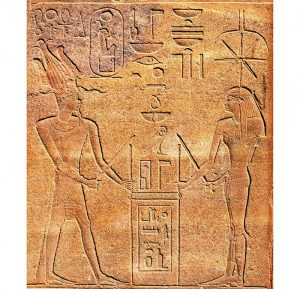 A scene of a royal foundation ceremony. The pharaoh Hatshepsut, accompanied by the goddess Seshat, marks out the ground for the building on which this relief appears, the ‘Red Chapel’ at Karnak. Rutherford Picture Library.

Other examples of royal influence on the initiation and development of settlements include the phenomenon of the creation of settlements to service royal projects. These might be the creation of workers’ towns to house labour required for major projects (such as that at Giza in the Old Kingdom), settlements to house staff who would service the constructed royal monuments (e.g. Kahun in the Middle Kingdom) or communities of expert craftsmen who were required for the construction of specialized monuments every generation (e.g. Deir el-Medina in the New Kingdom). Settlements were also needed for other activities that might be categorized as royal or state-driven, including mining and quarrying sites (e.g. the travertine quarries at Hatnub, near Amarna), and military settlements, some of which could be both substantial and self-supporting (e.g. Zawiyet Umm el-Rakham in the New Kingdom). Royal sites could also ‘go organic’, as seems to have been the case with the fortress of Buhen, which began life as a royal foundation – a military hub in Egypt’s Nubian defences during the Middle Kingdom – but became a thriving organic community in the Second Intermediate Period. 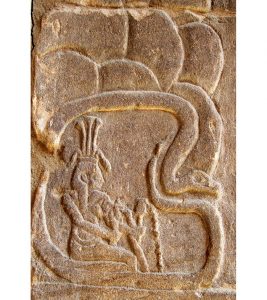 The source of the Nile was a mystery to the Egyptians. On this relief from Philae it is imagined as the pouring of water by the Nile god Hapy from under the rocks of nearby Biggeh Island. Rutherford Picture Library.

The organic development of towns and cities is the process whereby settlements thrive, or not, owing to their natural advantages. Some towns in Egypt may have flourished because of their connection to trade routes (e.g. Asyut for the Western Desert Oases, Coptos for the Wadi Hammamat routes to gold-bearing regions and the Red Sea), but almost all settlements in Egypt needed to be located by reference to the Nile. Along the Nile Valley and in the Nile Delta some important settlements were successful in becoming regional centres on a level beyond the confines of their district, and sometimes over a very long period. These sites include Coptos and Asyut in Upper Egypt; Hermopolis Magna in Middle Egypt; Memphis; and Bubastis, Mendes and Sais in the Eastern, Central and Western Delta respectively. 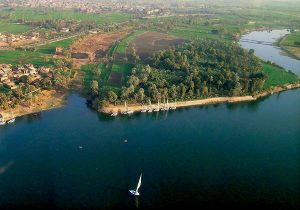 The dynamic action of the Nile in changing the shape of its floodplain can be seen in this aerial view of ‘Banana Island’ near Luxor, where silting-up of the channel has resulted in the island becoming attached to the floodplain. Angus Graham.

Even for planned settlements, organic growth, often based on their relationship with the movements of the Nile, was a significant factor in their success, or lack of success in the long term. Pr-Ramesses and Memphis are both good examples of the interplay between royal wishes and Nilotic behaviour in the long-term survival of cities. By the end of the New Kingdom, less than 200 years after its foundation, Pr-Ramesses had been abandoned as a major settlement. The movement of Nile branches in the Eastern Delta in the 11th century BC left Pr-Ramesses without the river-harbour that was vital for its functioning as a major trade and military hub, and so its position as the major settlement on the Pelusiac branch of the Nile at the beginning of the Third Intermediate Period passed to the city of Tanis – only a little downstream, but crucially on the Nile. In contrast, the urban centre of Memphis seems to have shifted gradually eastwards during the dynastic period as it followed the Nile, which wandered across its floodplain for at least 2,000 years.

The identity of these starving people, shown on the causeway of the Saqqara pyramid of King Unas, has been much debated. Perhaps they represent the vulnerability of marginal lands at a time of climate change towards the end of the Old Kingdom. Rutherford Picture Library.

In all cases, the most significant factor for long-term success of cities was, obviously enough, food supply. When Deir el-Medina ceased to be supported by the supply of provisions (including the most basic, water) by the central administration at Thebes, it became essentially unviable as an organic community. Even in major cities the accessibility of a wide range of high-quality agricultural products is a key attribute; in Papyrus Anastasi III, the city of Pr-Ramesses is praised not for its magnificent monuments, but for its pastoral positioning, allowing easy access to a wide variety of agricultural produce, and with the watery wealth of the river/sea singled out for particular attention. 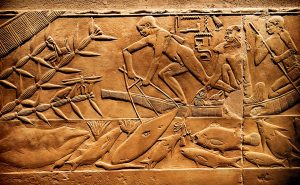 The Nile marshes were an abundant source of good things for the ancient Egyptians; not just many varieties of fish, but also the papyrus to make fishermen’s boats, as in this scene from the Old Kingdom tomb of Kagemni at Saqqara. Andy Whitehead.

One of our most vivid descriptions of an ancient Egyptian city is found in this New Kingdom hymn of praise recorded on Papyrus Anastasi III. Our knowledge of what cities looked like, other than by means of archaeological reconstruction, is mainly derived from textual accounts and images found on tomb and temple walls that incidentally portray the urban environment. It is interesting to note, however, that even ‘descriptions’ such as the one that follows here are more concerned with the benefits of the city’s natural environment rather than its physical appearance, so we receive only a limited notion of what cities looked like from original sources. 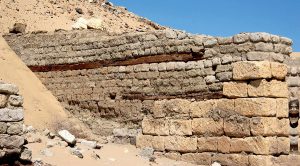 The three main types of building material used in ancient Egypt – mudbrick, stone and wood – are represented in this wall at Medinet Maadi in the Faiyum. The limited use of wood is indicative of its comparative scarcity. Steven Snape.

I have arrived at Pr-Ramesses-miamen (l.p.h.) and found it in [extremely] good condition.

It is a fine district without equal, having the layout of Thebes. It was [Re who founded] it himself.

It is a pleasant place in which to live: its countryside is full of everything good, and it has food and victuals every day.

Its ponds have fishes, its pools have birds.

Its meadows are verdant with herbage: the Iades-plant is a cubit and a half in height, and the carob is like the taste of honey in the damp soil.

Its granaries are full of barley and emmer: they approach the sky.

There are onions and leeks of the tr, lettuce of the grove; pomegranates, apples and olives; figs of the orchard, and mellow wine of Kankeme, which is sweeter than honey.

The Lake of Horus [Lake Manzalah?] has salt, and the Pa-Her-waters have natron. Its ships sail forth and moor, [so that] food and victuals are in it every day.

Joy dwells within it, and no one says ‘I wish I had….’ there. The small in it are like the great.

Come, let us celebrate for its festivals of heaven and its calendar festivals. The papyrus-marshes come to it with papyrus reeds and the Waters-of-Horus with rushes; twigs of the orchards, wreaths of the vine-yards, … birds from the Cataract region. It leans upon … the sea with beg-fish and buri-fish, and [even] their hinterland offers up to it.

The youths of ‘Great-of-Victories’ [i.e. the city] are in party clothes every day; sweet moringa-oil is upon their heads, and their hair is newly braided. They stand beside their doors, their hands bowed down with foliage and greenery of Per-Hathor and flax of the Pa-Her-waters on the day of the entry of Usimaatre-Setepenre (l.p.h.), Montu-the-Two-Lands, on the morning of the feast of Khoiakh, every man being like his fellow in uttering his petitions.

There is sweet sermet-brew of ‘Great-of-Victories’; its debyt-drink is like shaa, its syrup is like the taste of inw, sweeter than honey, beer of Kedy of the port and wine of the vineyards.

It has sweet ointment of the Segbyn-waters and wreaths of the grove.

It has sweet chant­resses of ‘Great-of Victories’ from the school of Memphis.

May one dwell, be happy and move freely about without leaving there!