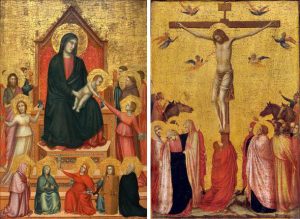 Florentine painter Giotto revolutionized the depiction of the human form.

There’s been almost seven hundred years of chatter about Giotto di Bondone (about 1267–1337), a painter from Florence considered one of the greatest artists of all time.

During his lifetime, Giotto was heralded as an artist who revived the art of painting, which some felt had fallen into ruin over the course of the Middle Ages. He was famous for painting on a monumental scale, demonstrated by his majestic frescoes in the Scrovegni Chapel in Padua. Ever since the 14th century, Giotto’s name has been synonymous with the early Renaissance in Florence, and his reputation has cast a long shadow on the art of the period. Writers such as Giovanni Boccaccio and Giovanni Vilanni, who were contemporaries of Giotto, championed his ability to depict the human figure as a believable form with mass, as if drawn directly from nature.

“…brought back to light an art which had been buried for centuries…So faithful did he remain to Nature…that whatever he depicted had the appearance, not of a reproduction, but of the thing itself, so that one very often finds, with the works of Giotto, that people’s eyes are deceived and they mistake the picture for the real thing.”
—Giovanni Boccaccio, Decameron VI, 5

“The most sovereign master of painting in his time, who drew all his figures and their postures according to nature. And he was given a salary by the commune in virtue of his talent and excellence.”
—Giovanni Villani, Nuova cronica

The above detail demonstrates Boccaccio and Villani’s points. Notice how Giotto painted the garments of these five female personifications of the virtues by applying subtle variations of color to create a sense of volume in the fabric, thereby revealing the figures’ bodies underneath: the contour of an elbow, the curve of a shoulder, the bulge of a knee.

Another of the earliest writers to evaluate Giotto’s art was Dante Alighieri, author of the famed Divine Comedy. Here’s what Dante wrote in the second canticle, Purgatory:

O empty glorying in human power!
How short a day the crown remains in leaf,
If it’s not followed by a duller age!
In painting it was Cimabue’s belief
He held the field; now Giotto’s got the cry
And Cimabue’s fame is dim…”
—Dante Alighieri, Divine Comedy, Canto XI, lines 91–95

Some explanation is probably in order. Cimabue is considered the master artist who trained Giotto in the art of painting. According to Dante, Giotto’s reputation had eclipsed Cimabue’s, despite the fact that Cimabue was also considered a revolutionary painter at the time (read more about Cimabue here). Take a look below at a famous comparison between the two artists and keep the images in mind as we hear from others who have written about Giotto.  Note, for example, in Cimabue’s painting how the garments worn by the Virgin and Christ shine with golden lines, known as chrysography, a stylized feature common in Byzantine paintings. The figures in Giotto’s image, by contrast, appear sculptural, having rounded forms and a clear sense of weight.

Around the year 1400, Cennino Cennini authored one of the most important early treatises on artist practices. Writing about Giotto, Cennini noted that the elder artist “translated the art of painting from Greek to Latin.” By this he meant that Giotto had moved away from the “Byzantine” manner of painting, often characterized by stylized forms, patterning, flatness, and otherworldly-looking figures.  Lorenzo Ghiberti, the great sculptor, wrote similarly that Giotto’s art rejected the Byzantine style and returned to the rumored excellence of ancient Etruria and Rome. When we compare Giotto’s Madonna and Child (below right) with a Byzantine icon from the end of the 1200s (below left), we can see how Giotto uses light and shade to suggest musculature, and how he depicts subtle expressions on the faces of both Mary and the Christ Child. 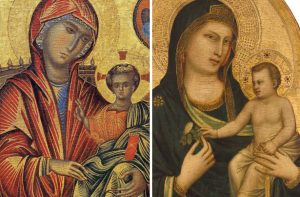 For pictures formed by his brush follow nature’s outlines so closely that they seem to the observer to live and breathe and even to perform certain movements and gestures so realistically that they appear to speak, weep, rejoice and do other things.” —Filippo Villani, De origine civitatis Florentiae et euisdem famosis civibus

In Giotto’s Crucifixion the Virgin Mary, overcome by sorrow, collapses into the arms of two other women. Across the way, John the Evangelist clasps his hands to his face in mourning as one man points and others gaze upon Christ’s lifeless body.

Any discussion about Italian Renaissance art, especially Florentine, must include a nod to Giorgio Vasari, whose Lives of the Most Excellent Italian Painters, Sculptors, and Architects(1550 and 1568) has long informed our understanding of art made in the period from Giotto to the mid-16th century. Here are his words in praise of Giotto:

“That very same debt painters owe to nature…is also owed, in my opinion, to Giotto, the Florentine painter; for when the methods and outlines of good painting had been buried for so many years by the ruins of war, he alone…revived through God’s grace what had fallen into an evil state and brought it back to such a form that it could be called good.”
—Giorgio Vasari, Lives of the Most Excellent Italian Painters, Sculptors, and Architects

In the modern era, beginning in the 19th century with scholars such as Jacob Burckhardt and John Ruskin, and continuing into the 20th with art historians Richard Offner, Roberto Longhi, Millard Meiss, Luciano Bellosi, and Miklós Boskovits, among others, scholarship on Giotto has sought to more clearly understand the extent of his artistic production. In 1937, for example, the Galleria degli Uffizi in Florence presented the exhibition Mostra Giottesca, which placed works by Giotto in the context of painting, sculpture, drawings, liturgical objects, and illuminated manuscripts from the late 13th century to the mid-14th. There have been several “Giotto” exhibitions in Europe since 1937, and most follow a similar format and bring together the same vast range of art objects in different media. We hope that the focus of the Getty exhibition on panel paintings and illuminated manuscripts will enrich our understanding of Giotto’s influence as well as our appreciation of his equally innovative contemporaries. 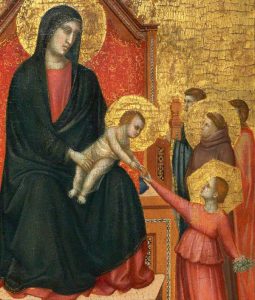