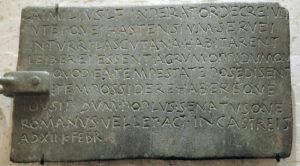 Imperator (“commander”) was a Roman title, awarded to victorious commanders and emperors. The Greek equivalent is strategos autokrator.

The Roman word imperator simply means “commander” or “general” and is the equivalent of Greek strategos. However, the expression had a second, more specific meaning, which comes close to Greek strategos autokrator, “commander and ruler”. This title was used for extraordinary commanders. It was first awarded to a Roman during the Second Punic War (218-202), when the Roman commander Publius Cornelius Scipio had expelled the Carthaginians from the Iberian peninsula. The story is told by Polybius of Megalopolis:

The Iberians […] came in to submit to the Romans, and on meeting Scipio saluted him as king. Edeco was the first who had done this and made obeisance to him, and he had been followed by Andobales. On that occasion Scipio had paid no great attention and did not particularly notice the appellation, but when […] all addressed him as king, the matter gave him pause. He therefore assembled the Iberians and told them that he wished to be called kingly by them and actually to be kingly, but that he did not wish to be king or to be called so by any one. After saying this he ordered them to call him imperator. [Polybius, World History 10.40.2-5; tr. H.J. Edwards.]

This story is quite interesting because it shows that the initiative to give Scipio a special title was taken by Iberian tribal leaders. The title that was to become so dear to the Romans was not a Roman invention, something that Polybius’ successor Livy felt was embarrassing, and therefore tried to cover up:

After this, a multitude of Spaniards […] saluted him as king; when Scipio, after the herald had obtained silence, declared that “in his estimation the most honorable title was that of imperator, which his soldiers had conferred upon him, and that the name of king, which was in other countries revered, could not be endured at Rome. They might tacitly consider his spirit as kingly, if they thought that the highest excellence which could be attributed to the human mind, but they must abstain from the use of the term.” [Livy, History of Rome from its Foundation 27.19.4; tr. C. Edmonds.]

The words “which his soldiers had conferred upon him” are Livy’s own and have no historical value. There was no acclamation before the Iberian leaders saluted Scipio as their supreme leader.

He was not the first to be greeted as “commander”, which appears to have been the traditional title of the man who was recognized as the leader of all Iberian tribes. The Greek historian Diodorus of Sicily tells that Hasdrubal the Fair, the Carthaginian general who had subdued Andalusia, had been called strategos autokrator.note (It is interesting to note that Appian of Alexandria, writing almost four centuries later, still recognized that imperator, which had by then become the title of the emperor, was a euphemism for king.note)

The second example is again from Spain: a decree by Lucius Aemilius Paullus, general in Andalusia, who, acting as imperator, broke up a tie of serfdom between the inhabitants of two towns. [CIL 1².614; text.] Again, there is an explicit statement that the commander was not the supreme leader: there is a reference to the ultimate judgment by the People and Senate of Rome.

There were more Roman generals who used imperator in inscriptions, but it is not clear whether they had received the title by acclamation, or used it as synonym for their titles (e.g., proconsul). However, the title was certainly awarded to Sulla, who started to count his imperatorial acclamations on his coins (L. SVLLA IMPER. ITERVM). Later, the Senate started to offer the title to generals too, as an indication that they had official powers (imperium). In inscriptions, a parallel development is attested: commanders started to combine the names of their offices with their imperatorial title (e.g, consul imperator).

For Julius Caesar, imperator no longer was a commemoration of a victory, but an indication of his absolute, dictatorial military power, and could even be used as part of his name: C. CAESARE IMP. (CIL 1².788). During the civil wars after Caesar’s death, Octavian, whose real name was -since his adoption- Gaius Julius Caesar, started to call himself Imperator Julius Caesar, as if imperator was a first name. Later, he was simply known as Imperator Caesar: a man without name of his own. This was made official by law in 29 BCE and could even be combined with the number of imperatorial acclamations, like CIL 5.526: IMP. CAESARI DIVI F. IMP. V). Two years later, Octavian settled for Imperator Caesar Augustus – three words that all became synonym of ’emperor’.

Although any general could call himself imperator, and although soldiers never refrained from acclaiming their commander with the honorific title, the use of imperator as name was restricted to the ruler and his relatives. We can see an identical development with triumphs: once the right of any victorious general, later the emperor’s own prerogative. The first emperors accepted imperatorial acclamations but did not use imperator as name, which was still seen as first name of Augustus, and could not be assumed by others. Nero, Galba, and Vespasian were less modest, and after this, the combination of imperator and caesar was the common beginning of the emperor’s titularly

In the late third century, the title imperator was given every year to an emperor, so that it came to indicate the number of regnal years. This was only to be expected. In the two first centuries of the empire, the Principate, the rulers had tried to show themselves as civil magistrates, and had counted their years according to their powers as tribunes; after the “crisis if the third century”, they preferred to present themselves as generals, which made a yearly imperatorial acclamation necessary if they wanted to indicate their regnal years. In fact, it meant that military might was sufficient legitimation to be ruler.