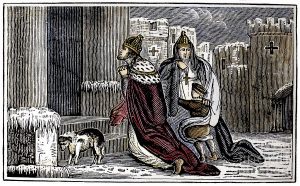 Conflicts between the medieval Christian church, led by the Pope, and nations, ruled by kings, occurred throughout the Middle Ages. 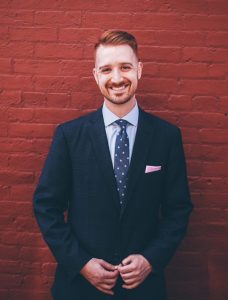 Conflicts between the medieval Christian church, led by the Pope, and nations, ruled by kings,
occurred throughout the Middle Ages. One great clash between a pope and a king took place between Pope Gregory VII and King Henry IV of the Holy Roman Empire. Henry was very young when he became king. As early as the age of fifteen, Henry moved to increase his power over clergy in the Holy Roman Empire. Eventually Henry’s actions brought him into conflict with Pope Gregory VII who was one of the great leaders of the Medieval Church.

Pope Gregory was both devout and clever. He worked to bring spiritual reform to the church by
increasing the power and authority of the popes. Gregory believed that the church was the supreme authority on earth; he felt that rulers and ordinary people alike were all subject to the will of the church and its pope. He did not hesitate to use the terrible punishment of excommunication as a way to resolve conflicts of church and state.

The conflict between Henry IV and Gregory VII concerned the question of who got to appoint local church officials. Henry believed that, as king, he had the right to appoint the bishops of the German church. This was known as lay investiture. Pope Gregory, on the other hand, angrily opposed this idea because he wanted the power for himself. He responded to the emperor’s attempts to name new bishops by excommunicating Henry. In addition, Gregory used an interdict to released the emperor’s subjects from their feudal obligations of loyalty to their leader. 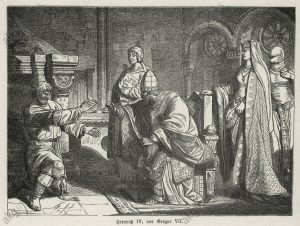 Then when he arrived, the Pope made the humiliated Henry wait in the bitter cold for three days before finally agreeing to see him. Contemporary accounts report that when Henry was finally permitted to enter the gates, he walked barefoot through the snow and knelt at the feet of the pope to beg forgiveness. As a result, the Pope revoked Henry’s excommunication.

Originally published by James Zoller under the terms of a Creative Commons Attribution-NonCommercial-ShareAlike 2.5 Generic license.