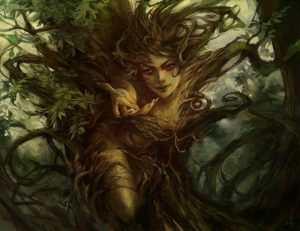 Modern rendering of a tree fairy 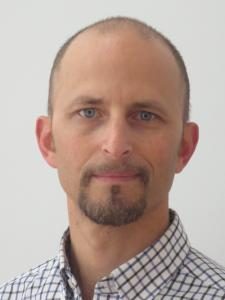 By Dr. David A. Wacks / 05.24.2017
Professor of Spanish
Department of Romance Languages
University of Oregon

It is well known that many pre-Christian beliefs and practices survive some fifteen hundred years after the Christianization of the Iberian Peninsula (see my earlier post on Asturian mythology). Some of these have been syncretized with Christian doctrine and practice, while others exist in parallel with or as a complement to Christianity.

We don’t know very much about the non-Roman, pre-Christian religions of the Peninsula. The Romans built very durable monuments and kept wonderful records, but we cannot say the same for the people who preceded them, whatever you want to call them. The so-called Celts, as far as we can tell, left settlements all over Europe, from Central Europe to the British Isles, and their legacy is clearest and best preserved in those areas where the Romans did not penetrate, and where vernacular literacy came early, such as Ireland, where literate monks were able to preserve local traditions and cults that had not been interrupted by Roman cult. We have no Cattle Raid of Cooley or Mabinogion of pre-Roman Iberia, no epic accounts of Celtic cults and traditions. What we do have, however, is a significant and growing body of archeological and toponymic evidence of pre-Roman cultures, Roman ethnographic accounts by historians —such as they are— and a fairly well documented ethnography of modern Iberian traditions with strong analogues in the so-called Celtic rim that runs from Ireland to Scotland to Wales to Brittany to Northern Spain. Against this background we can read whatever medieval literary evidence remains. And this is where it gets interesting. Much of this evidence, as we are about to see, is syncretized and presented as part of Christian tradition. 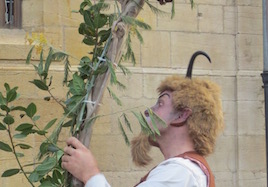 The Asturian busgosu (forest spirit), or to Martin of Braga, a demon

Christian sources describe local supernatural beliefs and practices as demonic. As far back as the early fifth century, Augustine wrote of pagan gods as demons in his City of God (Ferreiro 378). A century later in Galicia, Martin of Braga warned that “many of these devils who were banished from heaven hold sway over the rivers, the springs and the forests, and ignorant men worship them and make sacrifices to them as if they were gods” (De correctione rusticorum sec. 8). This is logical: it would hardly do for villagers to continue to pay tribute to Lugh and Deva to keep them safe at sea once they had received instruction on the Trinity and the Saints. There was a new pantheon, and while the old gods might not disappear entirely, they would have to continue in service to or in opposition to the new gods.

Pagan beliefs and practices continued to coexist with Christianity throughout the middle ages, leaving their traces in literature and art. Today I’d like to read with you two Spanish ballads (romances) that contain what critics tend to describe as “supernatural” or “magical” features, and look at these supernatural features against the documented modern ethnographic evidence of pagan beliefs and practices.

The first ballad is well-known and widely anthologized and taught. It is one of the few medieval Spanish ballads featuring a supernatural being who is not a saint or the ghost of a Christian. “La infantina,” or The Princess, and tells of the encounter between a knight who discovers an enchanted princess in a tree in the woods, who begs him to disenchant her and make her his wife or perhaps girlfriend. Before responding, the prince claims he must first go back to the castle to ask his mother’s advice. When he comes back, it is too late. The enchanted princess has been carried away. The ballad ends with the distraught knight bewailing his failure, and threatening to carry out himself the curse suggested by the princess: que le corten pies y manos — y lo arrastren por la villa (may they cut off his hands and feet, and drag him through the town).

On the face of it, this is a strange supernatural tale. The narrative sparseness so characteristic of the ballad adds to this sense of strangeness. Several features of this story bear analysis and comparison to modern traditions documented by ethnographers that may shed some light on it for us. 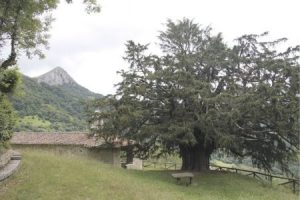 To begin with, the veneration of trees in pre-Christian Europe is well documented (Filotas 145). In Spain and other countries one finds ancient yew trees, tejos or texus, planted next to churches in a syncretistic gesture. Paloma Díaz Mas reminds us that enchanted princesses who ask princes to disenchant them are reflections of very ancient traditions of lady tree deities (Díaz Mas 336). Julio Caro Baroja writes that the Noche de San Juan is the time when these enchantments may be broken, and several communities in Spain enact this with rituals in which demonic or supernatural figures come out and proposition the young ladies or men of the village (Caro Baroja 278). 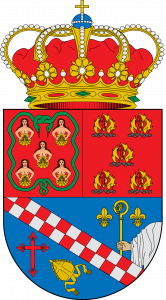 This reenactment of the erotic encounter between fairy and human is not merely fanciful or carnivalesque. There are a number of traditions that attribute supernatural origins to noble houses resulting from such unions. The legend of the house of Miranda in Asturias relates that the first Miranda married a fairy who would turn into a dragon one night a year. The family crest features five mermaids, from another version in which the progenitor married a siren instead of a fairy. These traditions are remnants of a time when fairies were gods, and descent from them explained why one family was more powerful than others: it was a narrative used to justify the social order.

Now’s let’s have a look at some of the particulars of “La infantina.” The prince comes upon “un roble, — alto es a maravilla” (an oak tree – incredibly tall).  According to some traditions, fairies manifest in oak groves. With the Christianization of the Peninsula, we see a transformation of this tradition in which Virgins appear in these sacred groves, and it is not uncommon to name girls after them: María del Robledo and so forth. In the town of Constantina near Seville there is a sanctuary dedicated to the Virgen del Robledo, where the Virgin appeared to a local pastor in the early sixteenth century.

In the ballad, the infantina’s hair covers the entire oak (todo el roble cubrían), demonstrating her physical integration with the tree and the intimate link between the spirit and the natural feature she embodies. The fairy explains that she is royal: Fija soy yo del buen rey — y de la reina de Castilla (‘I am daughter of the good King and Queen of Castile), which speaks to the medieval traditions of royal and noble descent from fairies. She tells how she was enchanted by seven fairies, and that today is the one day in which the enchantment can be broken: Hoy se cumplían los siete años (“today the seven years are complete”). Many of the supernatural traditions associated with St. John’s Day involve the divining of one’s future spouse and the number seven (Caro Baroja 249). The best known is the fountain at the Marian Sanctuary of the Cave of Covadonga in Asturias. According to tradition, if one drinks from all seven of the fountain’s spouts, marriage is soon to follow. Our second example is less cryptic and contains references to several documented beliefs and practices also related to St. John’s day. It is titled “La flor del agua” (Literally, ‘the flower of the water’). In the ballad, the Virgin Mary comes down from heaven to bathe herself in the waters of a local spring. She encounters a maiden — doncellita— coming from the village, on her way to the spring to collect the flor del agua. This refers to the first draught of water taken from a fountain on the morning of St. John’s day that is thought to have magical characteristics and that helps to attract a spouse (Caro Baroja 181–83). The maiden asks the Virgin if she will get married, and the Virgin assures her that she will, that she will have three sons who will grow to become kings, and that she will also have a daughter, and will die giving birth to her. 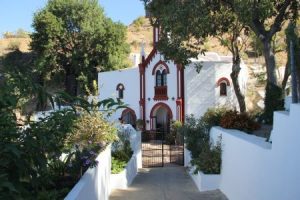 The substitution here of the Virgin for the traditional fairy is curious. In other sources, fairies associated with a water source come there to wash their hair or their clothes, and the traces they leave in the water are ostensibly what gives the water its curative or otherwise magical powers. In many cases these fairies are replaced by Virgins, who are then venerated as la Virgen de la Fuensanta (The Virgin of the Holy Spring). While it is common in Medieval art to portray the Virgin Mary as beautiful, one does not usually imagine her bathing, washing her blancos pechos (“white breasts”) and linda cara (“beautiful face”). This is clearly a case of a pagan tradition given a fresh coat of Christian paint. Many of these traditions are still practiced in parts of rural Spain. For example, the practice of the enramada or garlanding of wells and especially springs around St. John’s day is still current in Asturias and elsewhere in the North. Asturias in particular has quite of bit of fairy toponomy, with many springs, grottoes, and caves named for fairies or xanas in Asturian. 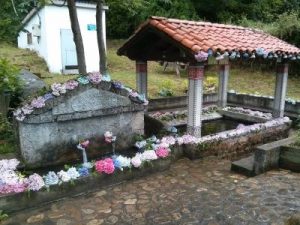 Now, the big question is, what do these fairies mean for medieval audiences? This is where it gets more complicated. The question of meaning or belief is difficult to determine even when you can ask an informant, which, in the case of the middle ages, we cannot. Most of the medieval writing relative to the supernatural comes to us from priests who are condemning pagan beliefs as demonic. The glimpses of pre-Christian beliefs and practices that we catch in lay sources such as ballads and other bits of narrative are seen darkly through a blurry lens. Other artistic evidence such as the fantastic creatures and animals decorating Romanesque and Gothic churches do not come with explanations as do Biblical and Hagiographic art. In the case of modern practices, we can ask the informants, but often they consider such things to be local traditions that have no place in Catholicism and therefore no spiritual or metaphysical meaning apart from their value as markers of local community and culture. Perhaps we can never know what these traditions meant to their practitioners. We can, however, read the literary record against the ethnographic and other evidence we have in order to gain a deeper understanding of the transformation of pre-Christian traditions in the context of medieval Christianity on the Peninsula.

Originally published by David A. Wacks under a Creative Commons Attribution-NonCommercial 3.0 Unported license.