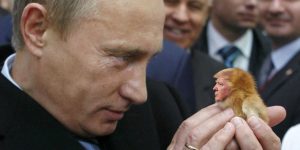 Friday it was confirmed that the FBI is in agreement with the National Intelligence Agency and the CIA over the Russian hackings — Russia, without question, deliberately interfered with our presidential election in order to help Trump win.

“Earlier this week, I met separately with (Director) FBI James Comey and DNI Jim Clapper, and there is strong consensus among us on the scope, nature, and intent of Russian interference in our presidential election.

The three of us also agree that our organizations, along with others, need to focus on completing the thorough review of this issue that has been directed by President Obama and which is being led by the DNI.”

You may recall that FBI Director James Comey also played a hand in Trump’s win, by allowing the public to believe, just days before the election, that the FBI may be re-opening the investigation into Hillary Clinton’s use of her private email server. For Comey to come forward and back the other two intelligence agencies and their findings from this investigation into the hackings — you’ve got to believe the evidence against Trump and Putin must be pretty damning.

Last week, FBI counterintelligence officials met with senators in a closed-door meeting to brief them on the findings of their initial investigation, and many of them were left believing that the FBI was not in complete agreement with the CIA, but now it’s clear that this was never the case, with officials from the FBI and the CIA stating, “The truth is they were never all that different in the first place.”

“In recent days, I have had several conversations with members of Congress, providing an update on the status of the review as well as the considerations that need to be taken into account as we proceed,” Brennan wrote. “Many – but unfortunately not all – members understand and appreciate the importance and the gravity of the issue, and they are very supportive of the process that is underway.”

Trump has been blowing off the initial findings for awhile now, calling them “ridiculous” and he even claimed that they were just lies spread by the Democrats in order to account for his “landslide win’” which was anything but a landslide. Hillary won the popular vote by millions and now it appears that whatever “win” trump may have achieved was handed to him on a silver platter by Russia.

With the FBI’s confirmation on Friday, it looks like Donald Trump has no more excuses and he’s definitely running out of places to hide.