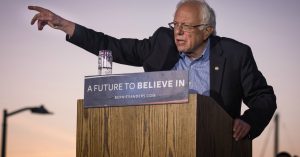 “I have a real problem with the New York Times, which from day one has been trying to be very dismissive of our campaign and has been very negative about our campaign.” (Photo: Roger Jones/flickr/cc)

‘Our campaign is about defeating Secretary Clinton on the real issues.’

In an interview with Chuck Todd on Meet the Press on Sunday, Democratic presidential hopeful Bernie Sanders had harsh words for media more interested in stoking candidates’ antagonism toward each other instead of focusing “on the real issues” of a shrinking middle class and rising wealth inequality in America.

You can go out and you can talk to millions of people and you get any response that you want. Our campaign is about defeating Secretary Clinton on the real issues. I want to break up the big banks, she doesn’t. I want to raise the minimum wage to $15 an hour, she wants $12 an hour. I voted against the war in Iraq, she voted for the war in Iraq. I believe we should ban fracking, she does not. I believe we should have a tax on carbon and deal aggressively with climate change, that is not her position. Those are some of the issues that I am campaigning on. The New York Times goes around and talks to a handful of people, does a front-page story, that is a problem with the New York Times and not for my campaign.

When pressed by Todd to weigh in on the FBI investigation of Clinton’s email practices while Secretary of State, Sanders reiterated, “I think the American people are tired of that type of politics. I think the media and the candidates have got to talk about why the middle class is in decline and why we have massive levels of income and wealth inequality. Those have been talking about. And those are the issues I focus on.”

“I just gave an hour long speech here in Santa Barbara,” Sanders continued, “and it wasn’t about emails, it was about the future of the middle class and some of the fundamental problems that they’re facing.”

Indeed, while in California, Sanders has addressed the very tangible issues of farmworkers’ rights, President Obama’s deportation policy that splits up immigrant families, the years-long drought, and local issues with poisoned groundwater leading to asthma and birth defects.

In Bakersfield this weekend, Sanders was introduced to a crowd by Cesar Chavez’s son-in-law, “who said that were Chavez still alive, he would certainly be a Sanders supporter,” reports CNN.

Sanders told supporters in the Central Valley community that there is still much to be done to help migrant farmworkers:

He said there was “no question to my mind that workers here and in the valley are being exploited as are farm workers all over this country,” according to CNN.

Jeff Weaver, Sanders’ campaign manager, is confident of the Vermont senator’s chances in the delegate-rich state: “What [everyone is] missing is that although the secretary [Clinton] has obviously racked up a substantial delegate lead, there is an incredible wellspring of support for the senator and it has not really made it through the process,” Weaver told the Guardian.

“This kind of intensive campaigning by the senator, it really does move a lot of voters,” Weaver continued, noting Sanders’ surprise win in Michigan’s primary after being a full ten points behind in polls. “He has the capacity to move voters just by his presence at these big events.”

California’s primary is June 7, and Sanders has moved swiftly up the polls there in recent weeks. Meanwhile, in Wyoming, where the senator won 55.7 percent of the caucus vote, the Wyoming Democratic Party forwarded a petition to the DNC to award Sanders an additional delegate to better reflect the outcome of the state’s caucuses.