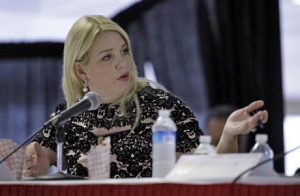 The new disclosure from Attorney General Pam Bondi’s spokesman to The Associated Press on Monday provides additional details around the unusual circumstances of Trump’s $25,000 donation to Bondi.

The money came from a Trump family foundation in apparent violation of rules surrounding political activities by charities. A political group backing Bondi’s re-election, called And Justice for All, reported receiving the check Sept. 17, 2013 — four days after Bondi’s office publicly announced she was considering joining a New York state probe of Trump University’s activities, according to a 2013 report in the Orlando Sentinel.

Bondi declined repeated requests for an interview on Monday, referring all questions to Marc Reichelderfer, a political consultant who worked for her re-election effort.

Reichelderfer told AP that Bondi spoke with Trump “several weeks” before her office publicly announced it was deliberating whether to join a lawsuit proposed by New York’s Democratic attorney general. Reichelfelder said that Bondi was unaware of the many consumer complaints received by her office about Trump’s real-estate seminars at the time she requested the donation.

“The process took at least several weeks, from the time they spoke to the time they received the contribution,” Reichelderfer told AP.

The timing of the donation by Trump is notable because the now presumptive Republican presidential nominee has said he expects and receives favors from politicians to whom he gives money.

“When I want something I get it,” Trump said at an Iowa rally in January. “When I call, they kiss my ass. It’s true.”

In addition to the money given by his foundation, Trump himself has donated $253,500 in Florida since 1999, most of it going to Republican candidates, the state party or political committees affiliated with GOP officials. His daughter, Ivanka Trump, also gave a $500 check to Bondi a week before her father’s money came in, as well as another $25,000 to the Republican Party of Florida the following year.

The AP reviewed thousands of pages of records related to consumer complaints about Trump University and its affiliates filed with Bondi’s office. The documents — previously obtained by the Orlando Sentinel, which first reported Trump’s donation to Bondi — reveal a new reservoir of unhappy Trump University customers, despite recent claims from the presumptive GOP presidential nominee that the students of his real estate seminar company were overwhelmingly satisfied.

New York Attorney General Eric Schneiderman and a separate federal class action civil lawsuit in California allege that Trump University — which was largely owned by Trump himself — defrauded consumers by as much as $35,000 each with promises of a real estate investing education that they either did not receive or found to be worthless.

All told, more than 20 people requested help from the Florida attorney general’s office in obtaining refunds from Trump University and affiliates, with Bondi’s predecessor receiving numerous other complaints about the seminar company Trump partnered with. Many of the Trump-related consumers alleged that they paid money for training materials and personalized instruction which were never delivered.

“I was laid off work for the first time in my life and really need this money to support my family,” wrote one of the many people seeking help, adding that he had been promised a refund but never received it. “$1,400 is so much money for my family.”

The documents complicate prior claims by Bondi’s office that she received only one consumer complaint about Trump University at the time that she decided not to join the New York investigation.

Bondi was not the only GOP attorney general to shy away from suing Trump.

The Associated Press first reported last week that then-Texas Attorney Greg Abbott received $35,000 from Trump, three years after his office in 2010 dropped a proposed lawsuit over Trump U. Following AP’s report, former Texas Deputy Chief of Consumer Protection John Owens said the case had been dropped for political reasons. He also made public a detailed internal summary of what he called his staff’s strong case against Trump.

A spokesman for Abbott, now the Texas governor, said the case was dropped after Trump’s organization agreed to stop offering his namesake real-estate seminars in the state. Within months, Trump University was out of business nationwide.

By choosing not to pursue Trump in court, the GOP attorneys general left the unhappy students in their states on their own to try to get refunds from the celebrity businessman.

Both Bondi and Abbott have now endorsed Trump for president.