As state sponsored government art, stamps offer an incredibly rich visual resource for gender studies, a fact most apparent when looking at how women have been commemorated on postage stamps issued by the United States of America. This first article will illustrate some of the stamps depicting women from the earliest British colonial settlements up until the American Revolutionary War. What immediately becomes apparent is that during the course of the twentieth century, the American Postal Authority recognised and honoured the central role women played in the nation’s formative history. 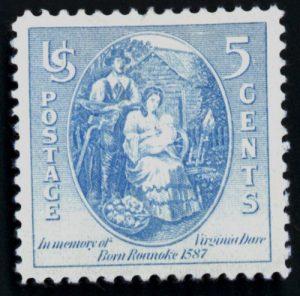 From the very first waves of British migration to the New World during the sixteenth and seventeenth centuries, women accompanied their husbands and families to form settlements. Some settlements were successful, others less so. The first English child born in the United States was a girl named Virginia Dare, born in August 1587 at the ill-fated “lost” colony of Roanoke in modern Dare County, North Carolina.  Since the colony mysteriously vanished soon after her birth, Virginia’s fate is unknown.  However, she subsequently became an icon in American folklore and politics being referred to in poems, books, comics and films. Although little is known about Virginia besides her historic birth, she has become famous enough to warrant her own commemorative postage stamp, depicted in Image 1. The stamp portrays Virginia as a baby being cradled by her mother Eleanor with her father Ananias standing close by. 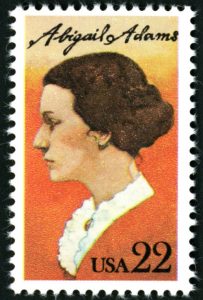 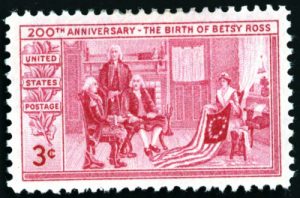 The first American flag, one of the most iconic symbols of America’s independence and national identity, is also credited to having been made by a woman named Elizabeth Griscom “Betsy” Ross (1752-1836), who presented it to General George Washington in 1776. The presentation of Betsy’s flag to George Washington has been depicted on the United States Postage Stamp issued for the bicentenary of her birth depicted in Image 3. 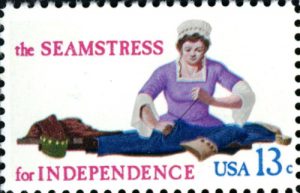 Women’s contribution to the supply and production of essential military equipment during the American Revolutionary Wars has also been commemorated on the United States Postage stamp. Image 4 depicts a female seamstress producing military uniforms for Washington’s Continental Army. 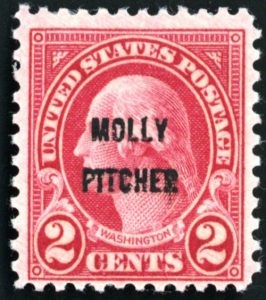 Finally the United States Postage Stamp overprinted “MOLLY PITCHER” depicted in Image 5 was issued in 1928 to commemorate the 150th Anniversary of the 1778 Battle of Monmouth. The overprint “Molly Pitcher” refers to a nickname given to Mary Ludwig Hays (1754-1832), she was purported to have provided much needed supplies of water to help keep American cannon from overheating, in addition to loading cannon herself during the battle’s height under heavy enemy fire. Now regarded more as folklore than history, the nom-de-guerre is widely regarded as a symbol representing the brave and selfless acts of heroism and patriotism conducted by countless women during the American Revolutionary War.