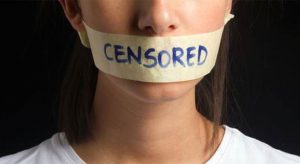 Universites Not Out of the Safe Space Yet / www.spiked-online.com

Like most Jews, Benjamin Aaron Shapiro, a respected journalist, is an advocate for social justice, following the Jewish concept of Tikun Olam, literally translated as “repair of the world.” Unlike most American Jews, Shapiro is a conservative whose views of the nation are closer to those of Ted Cruz than of Bernie Sanders.

He says “Sesame Street” and “M*A*S*H” are left-wing propaganda, and “Happy Days” has a theme of pacifism. He is a strong proponent of gun rights legislation and an opponent of the “Black Lives Matter” social movement. His speeches, syndicated newspaper column, and his radio commentaries sometimes lead to civil disorder, often begun by those who don’t share his ultra-conservative views.

One of Shapiro’s six books is Brainwashed: How Universities Indoctrinate America’s Youth (2004), published shortly after he graduated from UCLA. What happened at a few universities affirms some of the argument in that book.

In February, the president of Cal State/Los Angeles cancelled a forthcoming speech by Shapiro after students claimed what he had to say would be “hate speech.” President William Covina said Shapiro could speak at a time when a suitable opponent was found; however, Shapiro pointed out that Cal State allowed liberal speakers without having a conservative respondent. Covino reversed his position three days before the speech. 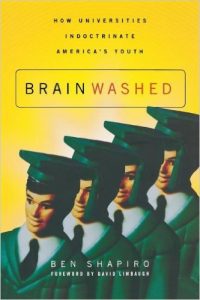 On the day of the speech, several hundred students blocked the entrances of the Student Union Building, intimidating those who wanted to hear what Shapiro had to say, and blocking those inside the building from leaving. The Daily Caller, a conservative newspaper, reported there were several fights outside the building. Following the speech, students moved to the president’s office, held a sit-in, and demanded his resignation for allowing the speech. Cal State later charged Young Americans for Freedom (YAF), the sponsoring organization, $621.50 for additional security; it did not charge other organizations that brought speakers to the campus.

In April, Shapiro spoke at Penn State; several dozen protestors shouted, banged on the doors to Sparks Hall, and played pre-recorded music at a high volume, trying to disrupt Shapiro’s speech, according to The Daily Collegian. The title of his speech was “When Diversity Becomes a Problem: The Fascist Nature of Liberalism.”

Last week, DePaul University blocked an invitation by the YAF chapter to host Shapiro. Citing the Cal State and Penn State episodes, the 24,000 student Catholic university in Chicago, according to an official statement, “determined, after observing events which took place when Mr. Shapiro spoke elsewhere, that it was not in a position to provide the type of security that would be required to properly host this event at this time.” DePaul’s argument—one of safety—was a lame way to deflect criticism that it was blocking free speech. Certainly, a university with a large on-campus police force and a Campus Violence Prevention Plan and the ability to ask local community police for additional protection should not have been able to hide beneath the cloak that the words of one person threatened campus security.

In 1644, before the English parliament, poet John Milton boldly spoke out against censorship. “Let her [Truth] and Falsehood grapple; who ever knew Truth put to the worse in a free and open encounter?” Milton asked. It was a revolutionary concept in an empire that required printers to get a license and be subjected to the whims not only of a monarch but the government as well.

In the 18th century, Lord Blackstone, one of the kingdom’s most distinguished jurists, spoke against prior restraint of free speech and of the press. The views of Milton and Blackstone became a basis of The First Amendment, one of the most liberal parts of the U.S. Constitution. It was this amendment that assured freedom of the press, speech, and religion; that amendment allows people to peacefully assemble and, if they wish, to protest government actions; it gives the people the right to petition the government for a “redress of grievances.”

During the next two centuries, others cemented this belief into American law. In the mid-19th century, philosopher John Stuart Mill stated, “We can never be sure that the opinion we are endeavoring to stifle is a false opinion, and if we were sure, stifling it would be an evil still.” At the beginning of the 20th century, Supreme Court Justice Oliver Wendell Holmes said that democracy is best served in “a marketplace of ideas.”

The Universal Declaration of Human Rights, developed by the United Nations after World War II, declares “Everyone has the right to freedom of thought, conscience and religion . . . [and] the right to freedom of opinion and expression, which implies the right . . . to hold opinions without interference and to seek, receive and impart information regardless of frontiers, information and ideas through any media whatsoever.”

America’s First Amendment applies only to government interference, and not to the suppression of free speech in the private sector. But, every university should be a place where all views are heard, analyzed, and debated. Professors in several departments—including history, political science, criminal justice, sociology, psychology, philosophy, and journalism—could have had discussions about Shapiro’s speech and made it a “teachable moment” within the confines of their own discipline.

Instead of blocking opposing views, students should be aware that the solution to shutting down opposition beliefs is not by censorship or prior restraint, but in applying Milton’s belief that facts and civil discourse will allow truth to emerge.