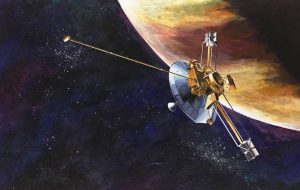 An artist’s concept of the Pioneer 10 spacecraft. / NASA

Launched five years ago on Aug. 5, 2011, NASA’s Juno mission maneuvered into orbit around Jupiter on July 4, 2016, joining a long tradition of discovery at the gas giant.

One of the brightest objects in the night sky, Jupiter has enthralled humans since ancient times. Today, scientists believe that learning more about the planet may be the key to discovering our solar system’s origins and formation. They theorize that Jupiter didn’t always rest where it is now, but that it moved throughout the solar system in its youth, disrupting the formation of Mars, influencing the formation and location of the asteroid belt, and more.

Scientists began to use space missions to unlock the planet’s secrets in the early 1970s when Juno’s earliest ancestors, Pioneer 10 and 11, launched. The pair of spacecraft reached the planet in late 1973 and early 1974. For the first time ever, scientists could obtain direct observations and close-up images of Jupiter, its moons and the mysterious Great Red Spot. 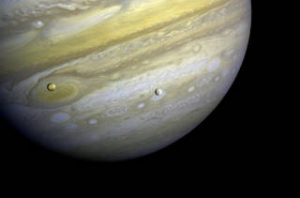 Voyager 1 took this photo of Jupiter and two of its satellites (Io, left, and Europa) on Feb. 13, 1979. This photo was assembled from three black and white negatives by the Image Processing Lab at Jet Propulsion Laboratory. / NASA-JPL

From Pioneer’s findings, scientists were able to make numerous conclusions about Jupiter. They found that the planet is composed mostly of liquid, and that it has a magnetotail, an extension of its magnetic field, like Earth. This hinted at Jupiter’s composition and the possibility of a solid core. They also got a close look at Jupiter’s clouds – from 26,000 miles (about 42,000 km) – to determine weather patterns.

The Pioneer missions paved the way for a second set of Jupiter-focused missions in the late 1970s, Voyager 1 and 2. Launched in 1977, the spacecraft are most famous for traversing to the outermost portion of the solar system – Voyager 1 has even passed its outer limits and has now passed into the space between solar systems. In time, Voyager 2 and the Pioneer missions will also leave the solar system. The Voyager pair flew past Jupiter in 1979, taking more than 52,000 photos of the planet and its moons over the course of several months.

These images and accompanying observations sparked seemingly countless new discoveries. The data revealed many features of the weather on Jupiter, including the existence of lightning in the cloud tops and of hurricane-like storm systems. Plus, for the first time, scientists discovered the existence of active volcanoes elsewhere than Earth, on the planet’s moon Io.

The Galileo missions to Jupiter followed in the late 1980s. Unlike previous missions, this set of spacecraft – an atmospheric probe and an orbiter – were designed to orbit the planet rather than collect data on flyby. The probe was the first spacecraft to directly measure characteristics of Jupiter’s atmosphere – descending 95 miles (153 kilometers) into it before melting and vaporizing from the extreme heat. The probe passed 58 minutes of atmospheric data to the orbiter, which then transmitted it back to Earth. The data included measurements of Jupiter’s atmospheric elements and showed that their abundance differed from that of the sun, providing insight into the planet’s formation.

The orbiter itself made numerous long-term observations about the Jupiter system, including finding evidence to support the theory that an ocean of water lies under the surface of the moon Europa and finding Jupiter’s ring system, a nearly invisible set of rings composed of dust created by meteoroid impacts with the planet’s four moons. In July 1994, Galileo also witnessed the collision of Comet Shoemaker-Levy 9 with Jupiter, the first observation of such an impact as it occurred on any planet besides Earth.

The Ulysses mission to study the sun collected data on Jupiter’s magnetosphere while the planet provided a gravitational assist to change the spacecraft’s trajectory in 1992. The Cassini spacecraft also observed Jupiter in 2000 on its way to its target destination, Saturn. Cassini’s camera took 26,000 images of the planet and its moons and created the most detailed global color portrait of Jupiter ever produced at the time.

More recently, New Horizons, a mission to Pluto, added to these observations during its flyby of Jupiter in 2007, finding the planet changed since previous looks by NASA – the Galileo spacecraft burned up in Jupiter’s atmosphere in fall 2003. New Horizons spent about six months observing the Jupiter planet system during its flyby on the way to Pluto, further exploring its weather systems, moons and rings. Perhaps most notably, New Horizons saw about 36 volcanoes on Io and measured the temperature of lava, finding it similar to that of Earth-based volcanoes. 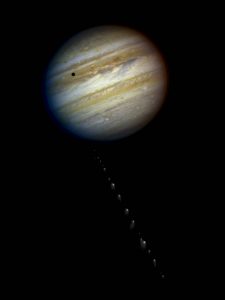 This is a composite photo, assembled from separate images of Jupiter and comet Shoemaker-Levy 9, as imaged by the NASA/ESA Hubble Space Telescope in 1994. / NASA, ESA, H. Weaver and E. Smith (STScI) and J. Trauger and R. Evans (NASA’s Jet Propulsion Laboratory)

With Juno’s successful orbit insertion at Jupiter in July 2016, scientists expect to release information about the mission’s first findings in September. NASA has already released several images taken of the planet by the JunoCam camera. Juno will make observations about Jupiter’s atmosphere and magnetic and gravitational fields, providing more information about the planet’s structure so scientists can deepen their understanding of Jupiter’s origin and evolution. Any of these clues could begin to unravel the mystery of the solar system’s origins and formation. 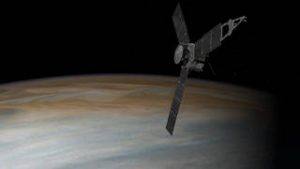 This illustration depicts NASA’s Juno spacecraft in orbit above Jupiter. From its unique polar orbit, Juno will repeatedly dive between the planet and its intense belts of charged particle radiation, coming only about 3,000 miles (5,000 kilometers) from the cloud tops at closest approach. / NASA, JPL-Caltech