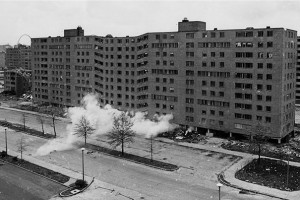 Courtesy of U.S. Department of Housing and Urban Development

St. Louis’ notorious Pruitt-Igoe housing project was demolished less than two decades after it was built. This week, the GSD hosts urban planners and others from St. Louis to discuss how such design failures marginalized African-Americans.

St. Louis planners and activists talk to one another, ponder future while at Harvard

When tear gas and bottles flew on the streets of Ferguson, Mo., in the summer of 2014, it was the latest chapter in a history of racial tension in the St. Louis area stretching back to the Missouri Compromise of 1820. Situated at the pressure point of the sectional hostility that flared into the Civil War, St. Louis also sited an iconic housing project that was turned into rubble along with other urban planning failures of the mid 20th century.

“In some ways, the story of St. Louis is the story of America,” Diane Davis said in an interview. That story is one of changing streetscapes and residential patterns, and of exclusion — spatial and racial. A native of St. Louis County, Davis is chair of the Harvard Graduate School of Design’s (GSD) urban planning and design department. Today (March 30) through Friday, the department brings together planners, politicians, activists, and academics from St. Louis and Boston for “Voices & Visions of St. Louis: Past, Present, Future” at Gund Hall. The event begins with a keynote panel this evening at 6:30.

Presented in partnership with the Mellon-funded Divided City Initiative at Washington University in St. Louis, the conference is meant to start a years-long conversation across 1,000 miles and a variety of disciplines. The conference explores how planning and design decisions historically have marginalized African-Americans in St. Louis, why that matters to cities across the country, and what 21st-century planners and designers can do about it.

“I see this event as speaking to issues that a lot of people in America care about,” Davis said. “But it’s also speaking to the commitment of the GSD and the urban planning and design fields to address some of the most important social and political problems of our times, and to do so in an interdisciplinary, design-informed way.”

The very creation of Missouri was an early step in the long, sad march to the Civil War, as the GSD conference’s first Thursday morning panel will discuss. In the run-up to Missouri’s admission to the Union as the 24th state, the territory was a political football between pro- and anti-slavery camps in Congress. It entered, in 1821, as a slave state, but one that also allowed for freed blacks and “mulattoes.” The U.S. Supreme Court struck down that compromise in 1857 with Dred Scott v. Sandford, which ruled against a slave who, brought to St. Louis, had sued for his freedom. The case quickened the escalation of the North-South conflict.

During the war, Missouri was divided between supporters of the Confederacy and the Union. “That split was, in a way, a split between the rural, agrarian south of Missouri and the industrial north, with St. Louis geographically straddling these two sides,” said Davis.

With that background in mind, the conference will move into the 20th century with the panel “Modernism and Its Discontents,” focusing on planning interventions such as St. Louis’ ill-fated Pruitt-Igoe housing project. Over a tract of 57 acres, Pruitt-Igoe’s 33 buildings, each 11 stories tall, were hailed as a clean and modern alternative to the tenements they had replaced. The first residents moved in in 1954.

“St. Louis had some spectacular modernist failures, which are also part of the history of struggle over race and space in the city,” Davis said. “Pruitt-Igoe was modeled after the superblocks approach to planning that people like Le Corbusier had introduced — big high-rises surrounded by open areas, or ‘towers in a park’ … Although this approach was common several decades ago in the field of planning and design, superblock social housing is now considered an object lesson of what not to do.

“But the problems of Pruitt-Igoe extended far beyond the typology itself. Just for example, the designers failed to locate bathrooms on the first floor, a problem for kids playing outside in the projects’ open spaces. Elevators often were dysfunctional and, coupled with other maintenance problems, the site deteriorated rapidly. It was also geographically isolated in a part of St. Louis that was not well connected to the rest of the city.”

By the 1960s, federal policies and cost-cutting measures (especially insufficient maintenance) combined to hasten white flight (and black middle-class flight), emptying out much of the project and leading to decay. By 1971, the federal and state governments agreed to demolish the entire development. This was accomplished with detonated implosions between 1972 and 1976, notoriously just two decades after Pruitt-Igoe opened.

Different factions have read different morals into the project’s fall: for example, that it showed the futility of the federal government or the fatal flaws in modernist architecture. But the story is not so simple, said Davis. In many cities, low-rise public housing projects have succeeded, and modernist high-rises are filled with the wealthy.

Even as the federal government facilitated the construction of low-income housing in urban neighborhoods, it encouraged — with highways and mortgage insurance — the middle-class to move out to the suburbs, in this case to growing towns in St. Louis County. (The city of St. Louis sits within the county geographically but is not connected to it politically.) The conference’s next panel will examine how race affects today’s St. Louis region, where conflicts are built into the divided county-city system.

In the wake of Pruitt-Igoe, many of the county’s surrounding towns passed zoning laws preventing high-rise construction, said Davis, “which was a way of keeping African-Americans out of the community, through design restrictions.” As for towns such as Ferguson, which is now mostly black, Davis said, “Some of the problems of policing have to do with the fact that these small cities have no tax base. And so police generate revenue by giving traffic tickets,” which can lead to confrontation between black citizens and officers.

There is hope, though. On Thursday afternoon, conference attendees will start discussing “the new ideas that can make a difference and make St. Louis a more just, equitable, and more livable city,” Davis said. The event continues Friday with an address by Atyia Martin, Boston’s chief resilience officer, and a showcase of GSD student work presented by Designing Justice, a student-led initiative focused on equity, race, and social justice.

Asked to hazard a hint as to the shape of some of the solutions that planners and aspiring planners might propose to the thorny dilemmas of racial and spatial exclusion, Davis responded “No!” with a laugh. “But we’ll find out more at the conference.” The point of the gathering, she went on, is to assemble planners, scholars, and others from different disciplines — thinkers and doers who might not otherwise be talking to one another — and see what lessons and ideas come out of that over time.

“There is no easy fix. You can’t change history,” Davis said, “but I do think planning has a lot to offer with respect to charting a different future. Part of this has to do with engaging people more in determining the fate of the places they live in, rather than having those ideas imposed on them.”