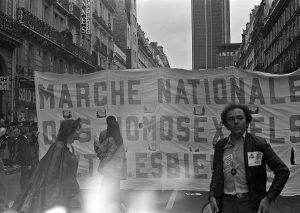 A selection of four films from the years of gay liberation from the 1970s and 1980s in France.

How liberating was gay liberation in France? A selection of four films from the years of gay liberation from the 1970s and 1980s can show us how gay men were becoming more visible, changing attitudes and speaking for themselves in this period. But these films can also show us how stereotypes persisted, and how gay liberation brought its own problems and contradictions.

Homosexuality in France until 1978

Homosexuality has been legal in France since the French Revolution at the end of the eighteenth century. Despite this history of tolerance, during the Second World War, the right-wing Vichy regime introduced new legislation repressing ‘unnatural’ acts for those under 21. Then, in 1960, the French parliament further hardened attitudes by passing an amendment that classified homosexuality among alcoholism, drug addiction, prostitution and tuberculosis as a ‘social plague’.

The period after the events of May 1968 and before the HIV-AIDS crisis in the early 1980s was one of great hope. Inspired by student uprisings in 1968, and the Stonewall Riots in New York a year later, in 1971 a radical gay liberation group was founded in Paris – the Homosexual Front for Revolutionary Action. ‘Down with the Hetero-cops’ was one of its slogans. Alongside radical political groups, other changes were taking place in the decade, as the sexual revolution gathered pace for everyone in France. Gay men and lesbians became more visible as their presence in the media grew and more and more gay bars, clubs, cinemas and bookshops began appearing in cities all over France. In this context, film also played a role, reflecting and questioning the achievements of liberation. 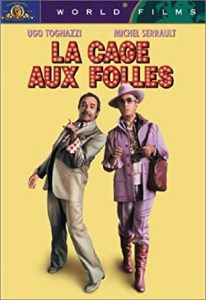 La Cage aux Folles, based on a 1973 play of the same name, was released in cinemas in 1978. They were both huge hits in France and abroad, with a remake in 1996 starring Robin Williams. The film is set in Saint Tropez, a place famous for its flamboyant inhabitants and holiday atmosphere. A gay couple living there, Albin and Renato, run the nightclub La Cage aux Folles – ‘the Birdcage’, a pun on a (derogatory) French word for a ‘queen’ – folle.

The film is a classic farce, relying on Albin’s outrageously effeminate behaviour to create comedy. It reinforces the idea that gay men are camp performers, prone to cross dressing and hysterical outbursts. Although we are invited to laugh at the stereotypical effeminate queens, we are also invited to sympathise with them. The stereotypes on display in the film were damaging, but they were also a cover for a more sympathetic message. 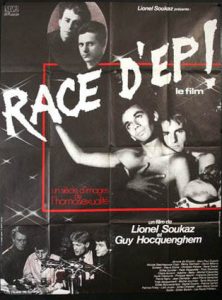 While some activists were attacking the stereotypes of La Cage aux Folles, others were determined to make their own films to represent gay men, their experiences and their past. Race d’ep was written by one of France’s most famous gay activists, Guy Hocquenghem.

The title is a play on the derogatory term pédéraste(pederast) in a type of French street slang where the syllables of a word are reversed, so pédéraste becomes race d’ep. This would have been a common insult to a gay man at the time.

The film consists of a number of historical scenes, from a 1930s German sexology clinic to a scene of cruising in a Parisian park in the present day. Hocquenghem engages with different depictions of homosexuals across history, and thinks about the importance of recovering gay men’s history. The film itself was also the subject of a political struggle after the authorities attempted to classify it as pornography. 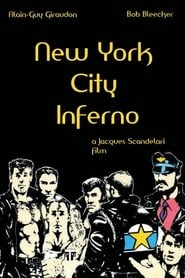 In the 1970s, for the first time, gay pornography could be legally created and distributed in France. A 1976 law introduced the ‘X-rating’ on films, allowing pornography to be shown in adult cinemas.

One of the most successful films produced during the boom in pornographic production that ensued was New York City Inferno. Filmed on location, the director Jacques Scandelari was tapping into the fascination that French men had for what they saw as the openness of the United States. The film is intended to turn its audience on, but it is also an exploration of the consequences of sexual freedom. Sexual liberation is shown to have a dark side, as the protagonist’s lover must be rescued from the city’s extreme S&M scene. One gay critic even called the film a ‘tale of exhaustion and the proximity of death.’ [zotpressInText item=”DQVUKH4C”] New York City Infernoshows that even pornography was used to reflect upon what it meant to be sexually liberated. 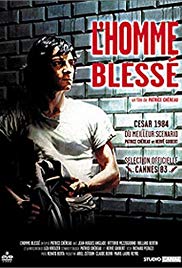 Homosexuality was also a subject of artistic expression. France has long been associated with famous literary figures who were attracted to people of their own sex – André Gide, Marcel Proust and Jean Genet for instance. This tradition continued as more writers and filmmakers explored gay identity in the 1970s.

L’Homme Blessé was written by the celebrated gay author Hervé Guibert. The film follows the story of Henri, a shy working class boy who becomes obsessed with a gigolo, Jean, and gets drawn into his world of prostitution and crime. Homosexuality is presented in the film as a dark vice and an unhealthy obsession. Guibert was consciously playing with the themes of the author Jean Genet – linking homosexuality to crime and prostitution. Indeed, the film could have been set thirty years before with little change to the script. Guibert thus expresses a certain cynicism with regard to liberation. In L’homme blessé, it is as though the political struggles for liberation had never happened.

How Liberating Were the 1970s?

It is true that the 1970s were a time during which many gay men felt freer to express their sexuality, and to explore a gay identity. Gay men consequently became move visible in France, and in the media in particular. Many gay men remember this moment with fondness, as a time of relative innocence before the HIV/AIDS crisis.

But this is not a simple story of increasing liberation. As these four films show us, visibility led to new problems of representation, and oppressive stereotypes were enduring. Furthermore, the writers and directors of these films were consciously questioning the value and consequences of gay liberation. Well before the tragic effects of the HIV-AIDS crisis began to be felt, they saw the contradictions and exclusions inherent in the liberation process.