Nationwide, barbershops are on the decline. / Shutterstock

But numbers show that barbershops are dwindling. According to census data, from 1992 to 2012 we saw a 23 percent decrease in barbershops in the United States (with a slight uptick in 2013).

As a sociologist, I find barbershops fascinating because they’ve also traditionally been places where men spend time with other men, forming close relationships with one another in the absence of women. Many patrons will even stop by daily to simply chat with their barbers, discuss the news or play chess. A real community is created in these places, and community is important to health and well-being.

So how should we interpret the decline of the barbershop? Is it yet another sign that, according to Robert Putnam in “Bowling Alone,” our community ties are crumbling? Or should we really be looking at just what sort of men are no longer getting haircuts at a barbershop – and what sort of men still go there?

Men with a professional bent

At the same time barbershops are closing, men’s salons are popping up across the country. They cater to men, providing them with high-end services that include hot towel facials and hand-detailing (a euphemism for a manicure). They’re more expensive than the average barbershop or chain store, have sleek contemporary decor and aren’t exactly conducive to hanging out and socializing.

In my book on these men’s salons, “Styling Masculinity,” hairstylists described the barbershop as a vanishing place. They explained that men are seeking out a pampered grooming experience that the barbershop – with its dusty TV, linoleum floor and stack of auto magazines – doesn’t offer.

The young licensed barbers working in these salons also seemed disenchanted with the old school barbershop. They saw these newer men’s salons as a “resurgence” of “a men-only place” that provides more “care” to clients than the “dirty little barbershop.” And those barbershops that are sticking around, one barber told me, are “trying to be a little more upscale” by repainting and adding flat screen TVs.

When I asked clients of one men’s salon, The Executive, if they’d ever get their hair cut at a barbershop, they explained that they didn’t fit the demographic. Barbershops, they said, are for old men with little hair to worry about or young boys who don’t have anyone to impress. As professional white-collar men, they generally saw themselves as having outgrown the barbershop.

A salon, on the other hand, with its focus on detailed haircuts and other services – manicures, pedicures, hair coloring and body waxing – help these men to obtain what they consider to be a “professional” appearance.

“Professional men…they know that if they look successful, that will create connotations to their clients or customers or others that they work with – that they are smart, that they know what they’re doing.”

Barbershops still important – for some

But the salon patrons I interviewed were generally white, well-to-do men. They offered only one point of view for what a barbershop is, what it can offer and who can go there. For example, in my earlier research on a small women’s salon, one male client told me the barbershop is a place for the mechanic, or “grease-monkey,” who doesn’t care how he looks, and for “machismo” men who prefer a pile of Playboy magazines rather than the finery of a salon.

These attitudes about the barbershop as a place of yore, as a fading institution offering outdated fads, are both classist and racist.

With all the nostalgia for the barbershop in American culture, there’s surprisingly little academic writing about it. But it’s telling that research considering the importance of the barbershop in men’s lives generally tends to focus on black barbershops. The corner barbershop is alive and well in black communities, and it serves a key role in the lives of black men.

In her book “Barbershops, Bibles, and BET,” political scientist and TV host Melissa Harris-Perry wrote about how everyday barbershop talk is an important place for black political thought. Scholars have also shown that the black barbershop can strengthen community ties and improve the economy in black neighborhoods, while acting as a place to socialize young black boys. 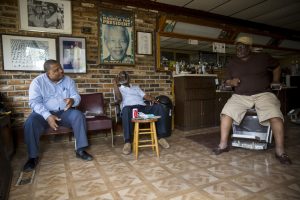 Paying a premium for nostalgia

So instead of asking if the barbershop is vanishing, we should really be asking: Where are they disappearing, what is replacing them and what are the social relations underpinning the emergence of the new men’s salon?

For example, in some white gentrifying neighborhoods, the barbershop is actually making a comeback. In his article, “What the Barbershop Renaissance Says about Men,” journalist Thomas Page McBee writes that these new barbershops primarily act as places where men can channel a form of masculinity that supposedly existed unfettered in the “good old days.” Sensory pleasures are central to the experience: The smell of talcum powder, the cool burn of aftershave and the site of shaving mugs help men to grapple with what it means to be a man at a time when traditional definitions of masculinity are in flux.

But these new, repackaged barbershops come at a cost, charging much more than the usual US$12 for a haircut – a price point that will exclude a huge swath of male consumers.

And so, in a place that engages tensions between ideas of nostalgic masculinity and a new sort of progressive man, we may very well see opportunities for social equality fall by the wayside. The hipster phenomenon, after all, is a largely white one that appropriates symbols of white working-class masculinity (think white tank tops with tattoos or the plaid shirts of lumbersexuals) without really giving up class privilege.

What can the men’s salon mean?

When we return to neighborhoods where barbershops are actually disappearing – replaced by high-end men’s salons like those featured in my book – it’s important to put these shifts into context.

They’re not signs of a disintegrating bygone culture of manhood. Rather, they signify a transformation of white, well-to-do masculinity. In the past, the barbershop was a place for these men. Today, while the old model may thrive in black or up-and-coming neighborhoods, white professional men are seeking a pampered experience elsewhere.

And they’re creating intimate relationships in these new men’s salons. But instead of immersing themselves in single-sex communities of men, they’re often building one-on-one confidential relationships with women hair stylists. Stylists often explained this intimacy as part of their jobs. For white men with financial means, though, the men’s salon becomes an important place where they can purchase the sense of connection they may otherwise be missing in their lives.