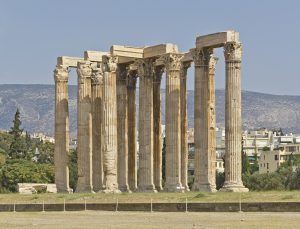 A fascinating group of manuscripts from the 15th and 16th centuries preserve a range of ancient and Byzantine works on mechanics. Here, Ian Ruffell gives an introduction to the discipline of Greek mechanical writing.

Greek writing on mechanics began in the early 3rd century BCE in Alexandria. Although it overlapped with other genres, from philosophy to mathematics to military tactics, it was a distinctive discipline which combined theoretical and practical aspects, with an element also of spectacle and performance. In common with some other genres, it has had a challenging textual history.

The first writer on mechanics was Ctesibius (active c. 275–240 BCE). He covered a variety of topics, including pneumatics and hydraulics, automata and artillery. Some of his devices, such as water clocks and pumps, are described by the Roman author Vitruvius (1st century BCE) in his de Architectura (On Construction). Ctesibius’ work was also developed by later Greek writers, notably Philo of Byzantium (probably late 3rd century BCE) and Hero of Alexandria (mid-1st century CE). Their works were even more wide-ranging: surviving texts discuss siege engines and military tactics (Philo), surveying and surveying equipment, optics and basic mechanical theory (Hero). The British Library has examples of arguably the most important surviving work in this tradition (and the most copied in the Renaissance): Hero’s Pneumatikaand Automaton-Making (peri automatopoiētikēs), and the military treatises of both his and Philo’s. 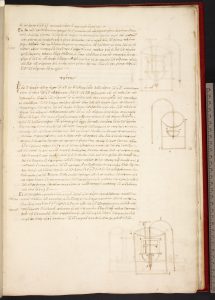 Hero’s Pneumatika (in two books) and Automaton-Making (transmitted as a single work but apparently originally also in two books) are related in subject-matter and style. They are commonly preserved together with each other, as seen in Burney 108, Harley 5605 and Harley 5589. The last of these has an abridged version of the Pneumatika, which omits a number of devices, as does Burney 81. In common with around two-thirds of the Pneumatika manuscripts, Burney 81 is not accompanied by Automaton-Making. These four London manuscripts were used in what is still the only English translation of the Pneumatika by Woodcroft (1851).

The Pneumatika combines theoretical discussion of hydraulic and pneumatic phenomena (in a lengthy preface to book one) with instructions for 80 devices that use these effects. The devices range from simple demonstrations of basic principles (e.g. siphons) to complex performance pieces. It is a pendant to Hero’s four-volume work On Water Clocks, which does not survive, and some mechanisms in the Pneumatika certainly fit with what we know of Hellenistic water-clocks. As in Philo’s Pneumatika (which partially survives in an Arabic translation/version), many devices (washstands, jars, horns, cups) are for the symposium (drinking party) and combine entertainment and utility. There are also more ornamental displays for indoor and outdoor use. Hero also has some medical implements using pneumatic principles. Both authors discuss pumps. In Philo these develop into discussion of various water-lifting devices; in Hero, they culminate in his description of hydraulic (musical) organs, both a hand-pumped version and one driven by a wind turbine.

Hero is perhaps most famous for the first detailed description of a basic steam engine. This consists of a bronze ball spinning on its horizontal axis between an inlet pipe and a pin/pivot; on the vertical axis, opposed exhausts are bent at right-angles so as to create rotation. Undoubtedly this device fulfils Hero’s avowed aim of presenting both ‘amazing’ devices and ones that explore or demonstrate theoretical principles. 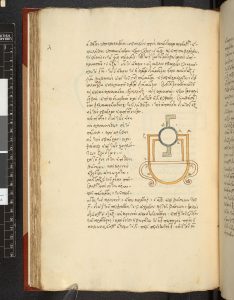 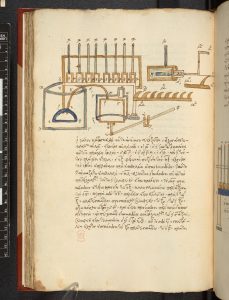 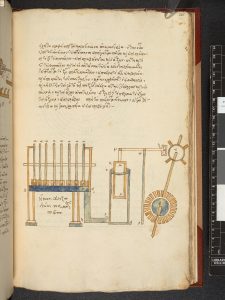 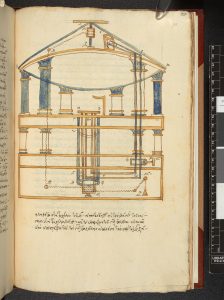 Hero’s Automaton-Making presents two types of automaton, mobile and static. The mobile automaton has a display resting on four columns that in turn rest on a box containing three wheels. A partitioned central tube contains the falling weight and a rope that descends via a pulley to the driving axle. The weight also powers most of the upper display which features a small shrine with a central Dionysos and a Nike (Victory goddess) on the roof; both can rotate and Dionysos can spurt milk from his thyrsos (staff) and wine from his cup. The shrine is surrounded by dancing maenads (followers of Dionysos), who can proceed around the shrine, and there are two altars, one each to the front and rear, that can be set on fire. Garlands can drop to decorate the four support columns. The basic performance is that the automaton rolls forwards for a few metres (a prepared trackway may be used), stops, performs the upper display and returns backwards. Hero adds variants, including moving in a circle, rectangle or wavy line (‘snake-like’ motion).

The static automaton likewise has a display on a pedestal, powered by a falling weight, but has more of a narrative. It features a building (another small shrine or naiskos) whose doors open and close repeatedly to reveal scenes from the story of Nauplius. The scenes feature painted backdrops and usually some moving elements: the Greek force at Troy making ships for their return home; ships sailing and dolphins swimming across the sea; Nauplius holding up a torch and Athena appearing aloft; the wreck of the Greek fleet and the lesser Ajax swimming for shore; the annihilation of Ajax by a thunderbolt.

The two treatises share some technology: the mobile automaton clearly uses hydraulic elements, including pipes, reservoirs and taps for the milk and wine; conversely, a small number of pneumatic devices use weights to rotate figures or even open doors to a shrine. It is clearly the use of weights and springs as power sources (the latter used in the stationary automaton in a subordinate role) that are defining elements of an automaton for Hero. 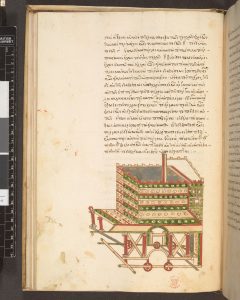 It might seem at first sight surprising that one of these manuscripts containing the Pneumatikaand Automaton-Making, Burney 108, is preceded by excerpts from two military treatises. While the reasons why works are combined in manuscripts is not always evident, in this case there is an underlying association of mechanical writers such as Hero and Philo with military treatises. Thus the texts of Hero and Philo on making catapults (Belopoiika), as well as Philo’s works on siege-engine and tactics, are passed down as part of a miscellany of military texts that was added to over time. Thus Burney 69 combines ancient texts with other writers on weapons and tactics from the Byzantine period. The catapult treatises, which together describe the evolution of arrow and stone-throwers from their origins in a glorified crossbow, are perhaps of most interest for ancient mechanics more generally. Hero himself compares elements in his automata with catapult technology and the relationship between these superficially very different machines goes back well before Ctesibius.

A characteristic of all these mechanical treatises is that they are a combination of text and image. The instructions for building the devices label the various parts used with letters inside the text, which clearly refer to accompanying diagrams, many of which survive. Superficially, the texts resemble instructions for modern furniture assembly, albeit with some important details left out or assumed, and some parts unexplained. The diagrams add to the problems of textual transmission. Some Hero and Philo manuscripts, such as Philo’s Belopoiika in Burney 69, leave blanks for images (perhaps to be filled in later). Some are simply blocks of text. The diagrams can be strikingly presented (as in both Burney 108 and Harley 5605), and they help orientate the reader, but they can also lack crucial elements, add unnecessary parts or otherwise mislead. The lack of perspective in these drawings compounds the problem. 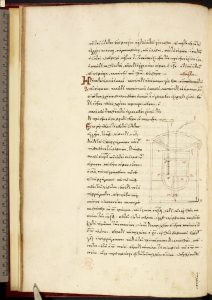 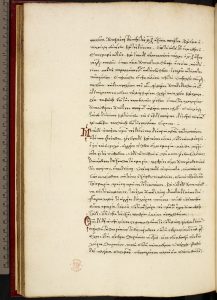 The tradition of mechanical writing is characterised from the beginning by a very free use and re-use of earlier material, with or without acknowledgement. Hero’s catapult treatise is in fact entitled in the manuscript Hero’s Belopoiika of Ctesibius, and clearly looks back to early 3rd-century models. Philo’s Belopoiika reports on the evolution of mainstream catapult technology but also describes experimental models by Ctesibius that use a bronze spring or compressed air rather than the usual springs made up of twisted bundles of sinew, and Philo also proposes innovations himself. In the Pneumatika Hero in some places clearly reproduces a Philonian model or seeks to improve on it (Philo in turn clearly used Ctesibian technology). Hero also seems to have drawn on a variety of other sources; Archimedes’ important work On Floating Bodies is mentioned in his theoretical section. In Automaton-Making, the static automaton is explicitly a Philonian model, with some gaps in the explanation filled, but Hero is clear that Philo was tweaking an earlier (presumably Ctesibian) model. There are also evident layers in the mobile automaton, albeit without attribution. 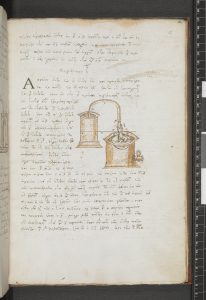 In this manuscript, Hero’s Pneumatika is preceded by an extract from Vitruvius relating to Ctesibius’ pneumatic discoveries (Burney MS 81) / British Library

One reason why so few technical texts survive may be this tendency for later writers to excerpt, embrace and extend their predecessors. Vitruvius incorporates extensive Hellenistic material; in late antiquity Pappus’ mathematical compendium uses extensive excerpts of Hero’s Mekhanika(which otherwise only exists in an Arabic version); at some point an unknown author rewrote much of the Pneumatika (‘Pseudo-Hero’); there are a number of Byzantine treatises on Heronian topics that are at best a collection of excerpts together with other material. Arabic translations of Hero and Philo can have many additional elements inserted or adapted within them (including Philo’s Pneumatika), providing more distant inspiration for treatises on ‘wonderful devices’.

Vitruvius leaves out of his account those mechanical devices he regards as frivolous or playful (deliciae). Writers on the history of technology have also wondered why Greek writers were as interested in showpieces or spectacles as they were in civil engineering or military kit. The answer in part lies in the social, cultural and political importance of contexts such as the symposium or the public festival, and in part, in changing senses of mechanical priorities. In a modern world that relies heavily on automation, programming and control systems, the interest of Hero, in particular, in these areas seems far less puzzling than it has in the past. Vitruvius’ frivolities certainly did not lack real-world applications.

There is no doubt that in certain cases the writers describe actual machines. Together, Philo and Hero (channeling Ctesibius) trace the evolution of catapults from their earliest form as glorified crossbows (in early 4th-century BCE Sicily) through to the more advanced forms of arrow and stone throwers of their own times. Ctesibius and Philo were both acquainted with and probably involved in catapult workshops at Alexandria and, latterly, Rhodes (a significant power in the Hellenistic world), although clearly their more exotic creations did not take hold. There is archaeological and historical evidence for the organs and water-clocks they discuss; in the case of clocks, the writers undoubtedly influenced as well as described real-world phenomena.

However, ancient mechanics was theoretical as well as practical. Both Philo and Hero show genuine interest in first principles, especially in the opening parts of their Pneumatika treatises. They have an experimental approach to theorising, something not so often to be seen in more philosophically-oriented scientific texts. That their explanations of observed phenomena may be wrong (atmospheric pressure, for example, was not properly understood until 1643) should not obscure their achievement or interest.

We may, however, ask why innovations such as the steam engine did not take off or why the experimental approach did not go further. Social and economic factors such as the existence of slavery, and the quality and availability of ancient materials have both been suggested, but the social status of ancient engineers may be part of the answer (Ctesibius himself was supposedly the son of a barber) and perhaps meant that there were not more productive exchanges between mechanics, philosophy and mathematics of the kind exemplified by such exceptional individuals as Archimedes. The status of the discipline may also explain why there is only one manuscript of the Pneumatika and Automaton-Making that survives from before the 15th century. In that sense the British Library’s holdings in manuscripts of Hero are entirely typical.

A. G. Drachmann, Ktesibios, Philon and Heron: A Study in Pneumatics (Copenhagen, 1948)

A. G. Drachmann, The Mechanical Technology of Greek and Roman Antiquity: A Study of the Literary Sources (London, 1963)

B. Woodcroft, The Pneumatics of Hero of Alexandria. (London, 1851)