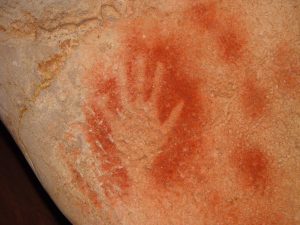 Women’s contribution to art history might have to be revised – for the better. Dean Snow/Society for American Archaeology

In France’s Pech Merle cave, which is around 25,000 years old, many hand prints were indeed female. 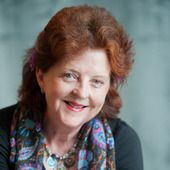 Back in the 70s, when I was writing a book called Australian Women Artists: 1840-1940 people were often bemused by my research. A book devoted to women artists? Pretty short book, huh? I mean, there were no great women artists.

Since then, feminist historians have transformed our knowledge of women’s contribution to global visual culture, rewriting art history in the process. Traditionally, women’s role was nearly invisible while notions of genius, of the instigator or leader of an art movement, were rarely assigned to them.

But research published this month by archaeologist Dean Snow of Pennsylvania State University indicates that the first artists may have been women.

Snow analysed hand stencils found in eight Paleolithic cave sites in France and Spain. By comparing the relative lengths of certain fingers, he determined that three-quarters of the hand prints were female.

In France’s Pech Merle cave, which is around 25,000 years old, hand stencils surround the Spotted Horses mural. By measuring and analysing the Pech Merle stencils, Snow found that many were indeed female. Until recently, most scientists assumed these prehistoric hand prints were male. 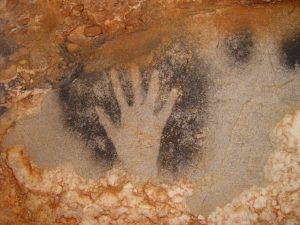 What were our ancestors doing down there in the dark?

Sheltering from inclement weather? Climate conditions in the Paleolithic were brutal: the era marks the end of the last Ice Age and so the weather in southwestern France, where Pech Merle is located, was arctic.

Taking refuge from not-so-friendly creatures? There were probably around 20,000 individuals in all of Europe, hunter-gatherers travelling in small communities. Woolly mammoths, one of which is depicted on the walls at Pech Merle, roamed the neighbourhood.

Were the humans performing shamanistic ceremonies or some form of hunting magic? Pech Merle’s main chamber, which is nearly two kilometres long, is difficult to access from the surface and there are no signs of continual human habitation.

Our ancestors descended for a purpose. It was a tricky business. They needed constant fire to illuminate their work and scaffolds to paint high up. Nor did the cave artists concentrate on their own species. They also chose to depict animals. In Pech Merle, these include horses and reindeer. 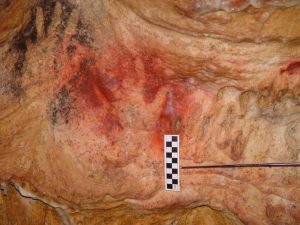 Hand stencils in the Gargas cave in France. Dean Snow/Society for American Archaeology

Men were the major hunters, and that previously underpinned assumptions about the cave painters’ gender. Women, concerned with rearing children as well as gathering plants for food and medicine, were not considered to be artists presumably because they were less knowledgeable about the animals’ size, strength and shape.

But as both sexes were probably involved with dismembering the kill, women could gain the necessary anatomical information.

The artists of Pech Merle depict the animals as beautiful beasts. The two dappled horses are wild, glorious creatures whom the artists clearly admire. The horses seem to float, dreamlike, before the eye. Nor is the artist intimidated by the horse, which would be capable of trampling her to death, but presents it as an object of esteem so high it’s close to worship. Surrounding the horses, like signatures, are hand prints by the female and male artists, a gesture of equality rarely seen in Western art. 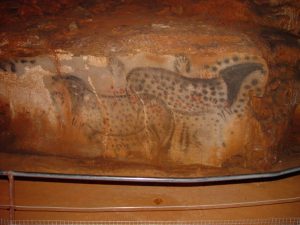 Recent research by a team of international of scientists from York and Berlin Universities has scrutinised Pech Merle with DNA analysis. Arne Ludwig, one of the co-authors commented:

We assume that the people who did these cave paintings were horse-hunters. They needed to be able to observe their environment very precisely. Their whole culture was practically based on hunting horses, because horses were the most common large mammals at the time.

The team also proved that the spotted horses were not imaginary beings: some horses at that time did have spotted coats, rather like leopards.

Does that undermine the theory that the drawings – and the handprints – have a magical purpose?

French archaeologist Jean Clottes, president of the International Federation of Rock Art Organizations, points out that spots depicted on the Pech Merle horses appear both above and below the animals, not just on them.

He argues they must have had another meaning. The Paleolithic people were animists. Shamans, the tribe’s healers, who can also be female, enter into trance-like states, sometimes drug-induced, which enable them to communicate with spirits and ancestors, and find cures for the sick. There’s also the notion of hunting magic where a ritualistic representation of the desired animal was meant to protect the hunter from injury and death.

While the paintings are exquisite, the handprints are especially moving because, glimpsed like a delicate wave from long ago, they signal not only the genesis of art’s history but women’s contribution to it.