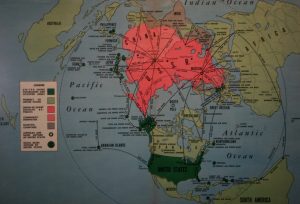 The crisis in Crimea is not just about “losing Ukraine.” It would be an even greater catastrophe to “lose Russia” to a new Cold War. (Photo: Jeroen Elfferich / Flickr, Creative Commons)

As the passage of time slowly diminishes important events, it is history that must gather all the facts and emotions and expose it to future generations. One such event, perhaps one of the most important of the twentieth century, no longer exercises relevancy in the daily lives of many- the Cold War. The Cold War shaped American foreign policy and political ideology, impacted the domestic economy and the presidency, and affected the personal lives of Americans creating a climate of expected conformity and normalcy. By the end of the 1950’s, dissent slowly increased reaching a climax by the late 1960’s. The Cold War was to last almost to the fall of the Iron Curtain and the death of the Soviet Union. The origins of the Cold War can be traced to the late 1910’s when America experienced the Red Scare. Suspicion and apprehension of the Soviet Union remained constant throughout the twenties and thirties intensifying with Josef Stalin’s brutal regime.

When Russia was invaded by the Nazis, those concerns were temporarily set aside as the Soviet Union became an ally. As World War II came to a close with imminent allied victory, differences surfaced between the Americans and the Soviets. Some historians believed that five major issues separated the two future adversaries: the impending government of Eastern European countries, Poland, economic reconstruction, Germany’s future, and the atomic bomb. Some issues focused on the notion of “sphere of influence”. The Soviet’s sphere originally centered around their borders, while the United States’ centered around Western Europe.

Even though Franklin D. Roosevelt (FDR) was prepared to live with this notion, widespread political opposition existed in Washington as exemplified by Congressman John Dingell’s statement in August 1943, “We Americans are not sacrificing, fighting, and dying to make permanent and more powerful the communistic government of Russia and to make Joseph Stalin a dictator over the liberated countries of Europe.” (1) On the issue of what type of government should rule Eastern Europe, obviously a democratically elected administration was the American expectation. The same was said for Poland and Germany. However, FDR recognized Poland as an integral part of the Soviet’s sphere of influence, but he hoped Stalin would give concessions to appear as if the Atlantic Charter was being implemented. In Germany’s case, the Soviets and Americans acknowledged the permanent destruction of the German industrial capability as a way to prevent a third conflict, but the plan failed.

The Soviets argued that a pastoral Germany would be unable to make war reparations. American business interests and policy makers strangely agreed, but for different reasons. A strong German industry they argued would be a key to postwar commerce and trade releasing the United States from supporting the German economy for an extended period. The issue of European economic reconstruction was entirely in the hands of the Americans, who possessed the strongest economy during and after the conflict. From the Soviet Union, Stalin was eagerly persuaded by American interests to petition for a loan ranging from $1 billion in 1943 to $10 billion in 1945. As the war ended, enthusiasm turned to skepticism when American diplomats perceived a toughening of Soviet policy. Fearing a return to recession and misuse of funds, Congress placed drastic limits on lend-lease support pointing out that requests for loans after the war would meet deep uncertainty. Ultimately, the Soviets never received any monetary assistance. The final agenda separating the former allies was the atomic bomb. From the moment it became a reality, FDR agreed to share its secrets with the British and no one else except by mutual consent. Agreements were signed, including the reassurance that Great Britain would remain a world power after the war, and also providing for maximum secrecy in regards to atomic weapons. However, it did so in a manner that aroused Soviet suspicions about the intentions of its two allies. As these suspicions mounted and the gulf widened between the two superpowers, the presidency felt the tentacles of the emerging conflict.

The Cold War brought about changes to the presidency of the United States. Internal and external forces influenced those changes. Internally, Truman’s hard-line stand against Stalin put enough pressure on his administration to affect many presidential acts. Externally, politicians used anti-communist hysteria to campaign on a strong, rightist platform, occasionally accusing the current administration of softness in order to improve their lot. In one instance Robert Taft blamed Truman for seeking a congress “dominated by a policy of appeasing the Russians abroad and of fostering communism at home.” (2) American foreign policy became one of containment as it reacted to the Cold War. As the mutual confidence of the two nations weakened, a kind of chess game evolved using the world map as its board. The United States supported corrupt and anti-democratic governments, but friendly to America. Meanwhile, the Soviets subsidized groups favorable to their own interest.

The Cold War’s rhetoric and anti-communist propaganda dictated foreign policy. In scaring “the hell out of the American people”, Truman unleashed a fervor that would become part of American life and modify existing relationships to the outside world. American allies depended almost exclusively on their stance on communism. The same applied for domestic policy. The Cold War affected domestic policy two ways: socially and economically. Socially, the intensive indoctrination of the American people led to a regression of social reforms. Economically, enormous growth spurred by industries related to war was aided by heavy government expansion. However, New Deal economics felt the greatest impact of the Cold War. By the 1950’s, New Deal reforms were often associated with the left. Its advocates were attacked for promoting programs close to the realm of socialism. The presidencies of Truman and Eisenhower kept away from the Rooseveltian ideals of social and economic reforms. For veterans the economic future brightened as the government spent countless resources through the GI Bill, VA and FHA loans to help them buy new homes or receive an education. Social reforms in the fields of civil rights, labor unions, working conditions, and women concerns were minimum and often ignored.

In human behavior, consensus to anti-communist ideals became the norm for everyone, especially government employees. Firm anti-communist demeanor was expected from everyone, particularly those in government. Campaigns to rid government of so-called “reds” became commonplace. One was the House Committee on Un-American Activities (HUAC), which used the Smith Act of 1940 to prosecute anyone advocating communism. In such a fervent era of anti-communism, the junior senator for Wisconsin, Joseph McCarthy, employed this hysteria to prosecute countless government officials. To promote liberal ideas, civil rights advancements or possible cooperation with communist states was enough to mark a person for persecution. Changes in the “conformity” of America however, did not occur until the end of the 1950’s, coming slowly at first.

Consensus may have started changing after CBS newscaster Edward R. Murrow and producer Fred Friendly showcased McCarthy’s indictment of Air Force lieutenant Milo Radulovich. Lt. Radulovich had been asked to resign because his father and sister were once accused of reading “subversive newspapers.” Murrow and Friendly confronted McCarthy directly, accusing him of assaulting peoples integrity, destroying careers, and using “character assassinations to seize control of the political process.” (3) In the television and film industries, many actors and actresses were blacklisted for their assumed leftist views. Movies became a vehicle to exhibit the discontent against the system with films by James Dean and Marlon Brandon among a few.

Literature flourished with themes of individualism versus the system. With poets like Robert Lowell, critics like Dwight McDonald, movies like “Rebel Without a Cause” and “The Wild Ones”, rock-and-roll music, and college student unions, “conformity” in the 1950’s was all but secured. These critics of “conformity” championed individualism and the younger generation’s anxiety over nuclear war. Another area of criticism was the economy. Even though poverty had declined, between one-fifth to one-fourth of the nation could not survive on the income earned. (4) It wasn’t until the end of McCarthyism that dissent increased, reaching a crescendo during the Johnson/Nixon administrations of the late 60’s and early 70’s.

The longest conflict of the twentieth century, the Cold War affected everything, from political ideology, foreign and domestic policy, to the presidency and the personal lives of Americans. With the collapse of the Iron curtain in Eastern Europe, the unification of Germany, the fragmentation and subsequent dissolution of the Soviet Union have all but eliminated the Cold War. International cooperation during the first Gulf War demonstrated that even before the end of the Soviet Union, the rhetoric of the past no longer had any place in American foreign or domestic policy.

Originally published by eHistory at The Ohio State University under a Creative Commons license.