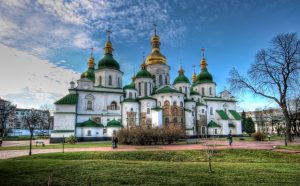 The St. Sophia Cathedral in Kiev is a sign of the city’s former historical significance. matt shalvatis

The Kiev of ancient Rus was one of a number of fortified cities dotting the great plains that were watered by rivers debauching into the Black Sea or the Mediterranean.

A city glistening with the light of holy icons,
fragrant with incense,
ringing with praise and holy, heavenly songs.

These lines referring to the “mother of Russian cities” and the “joy of the world” may not bring to mind the present capital of Ukraine, the place where the Australian Minister for Foreign Affairs along with her Dutch counterpart urged international control of the MH17 crash site.

They are the oft-quoted words of its bishop, Ilarion of Kiev, uttered at a time before St Petersburg was founded (1703) and even before the rise of Moscow, a city of no great significance until the 12th century.

The Kiev of ancient Rus was one of a number of fortified cities dotting the great plains that were watered by rivers debauching into the Black Sea or the Mediterranean. Kievan Rus’s links with Western Europe were then relatively strong, even though Rus had converted to Greek Orthodoxy in preference to any other main religion.

As recounted by the Russian Primary Chronicle, Roman Catholicism was rejected because it insisted on the sovereignty of the Pope; Judaism because the walls of Jersualem had fallen down – not a good example; and Islam because alcohol was forbidden. Drinking was “the joy of the Russians”.

But the emissaries who came back from Constantinople had discovered places of worship so beautiful they “knew not whether [they] were in heaven or earth”.

With this recommendation, how could Vladimir, the Grand Prince of Kiev, in 988 AD (according to tradition) refrain from being baptised, or from ordering his people to do likewise? How could his peers fail to demonstrate the love, joy and fellowship that flowed from the practice of Christian virtues, as in the case of the prince David:

Such feasts were supported by the richly fertile black earth, which could be sown over and over again without a fallow year, and by the forests full of honey and wild animals. Claimed one boastful hunter:

At Chernigov I bound wild hares with my bare hands and captured 10 or 20 live horses with the lasso. and besides that, a stag once gored me, one elk stamped on me while another gored me, a boar tore tore my sword from my thigh, a bear on one occasion bit my kneecap, and another wild beast jumped on my flank and threw my horse with me. But God preserved me unharmed.

A deep significance was attached to the forests that harboured bees, berries, mushrooms, insects and rodents, all of which took their place in lore and literature. Folk arts – embroidery, wood carving, singing – thrived, even in the harsher times to come.

By the beginning of the 12th century Rus had divided into 12 independent principalities all fighting for power, all trying to get ascendancy over Kiev. The city was sacked and pillaged so often it began to decline, a process which was completed by the invasion of the Golden Horde, the Mongols.

On their first coming they cut through the tribes like “a knife through butter”, accepting the Grand Prince’s truce then betraying him, and departing quickly, leaving the chronicler to remark, “Only God knows whence they came and whither they went”.

13 years later they returned, spearheaded by Gengis Khan. Installing a Mongol overlord and a Russian second-in-command, but leaving the people alone so long as they did what they were told, the Mongols reigned over Rus from about 1240 to 1480, isolating her from all contact with the culture and political development of Renaissance Europe.

The isolation of Kievan Russia under the Mongols was deeply formative, and did not lack significance for the future of Ukraine. But it was the Muscovites who finally routed the Mongols and wrote the next chapter in the story of Russia’s relationship with the West.