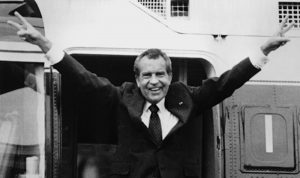 Nixon had a strong “us v. them” mentality.

On June 17, 1972, five men were arrested after breaking into the headquarters of the Democratic National Committee located in the Watergate Hotel in Washington, D.C. The burglars were not ordinary thieves. They carried wiretaps to install on telephones. They carried cameras to photograph documents. Four of the five criminals were anti-Castro Cubans who had been previously hired by the CIA. The fifth was James McCord, the security adviser for Nixon’s campaign staff known as the Committee to Reelect the President, or CREEP. Although the incident failed to make the front pages of the major newspapers, it would soon become the most notorious political scandal in American history.

The Watergate office complex — site of the infamous 1972 break-in that led to the first Presidential resignation in American history– is still in use in Washington, D.C.

In the heated climate of the late 1960s and early 1970s, President Nixon believed strongly that a war was being fought between “us” and “them.” To Nixon, “us” meant the conservative, middle- and working-class, church-going Americans, who believed the United States was in danger of crumbling. “Them” meant the young, defiant, free love, antiwar, liberal counterculture figures who sought to transform American values. 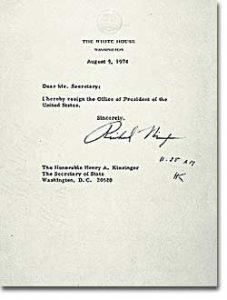 President Nixon’s letter of resignation (above) is addressed to the Secretary of State — who at the time was Henry Kissinger — in keeping with a law passed by Congress in 1792. When Kissinger initialed the document at 11:35 a.m., Nixon’s resignation became official.

Nixon would stop at nothing to win this war of hearts and minds, even if it meant breaking the law.

In 1971, a White House group known as the “Plumbers” was established to eliminate administration leaks to the press. Their first target was Daniel Ellsberg, who had worked on the Pentagon Papers, a highly critical study of America’s Vietnam policy. Ellsberg leaked the Pentagon Papers— intended to be used internally by the government — to the New York Times. The Plumbers vandalized the office of Ellsberg’s psychiatrist, hoping to find discrediting information on Ellsberg to release to the public.

Later that year, Attorney General John Mitchell resigned to head CREEP. The campaign raised millions of dollars in illegal contributions and laundered several hundred thousand for plumbing activities. A White House adviser named G. Gordon Liddy suggested that the Democratic headquarters be bugged and that other funds should be used to bribe, threaten, or smear Nixon’s opponents. After the arrest of the burglars, Nixon suggested the payments of hush money to avoid a connection between Watergate and the White House. He suggested that the FBI cease any investigation of the break-in. He recommended that staffers perjure themselves if subpoenaed in court. 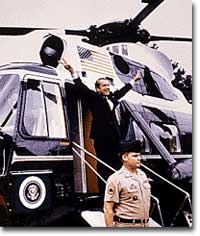 Richard Nixon delivers his trademark “V” sign with both arms as he prepares to leave the White House for the last time on August 9, 1974.

The Watergate cover-up was initially successful. Despite a headline story in The Washington Post by Bob Woodward and Carl Bernstein, suggesting White House involvement, Nixon went on to win 49 of 50 states in the November 1972 Presidential election against George McGovern.

When the burglars were tried in January 1973, James McCord admitted in a letter that members of the Nixon Administration ordered the Watergate break-in. A Senate committee was appointed to investigate, and Nixon succumbed to public pressure and appointed Special Prosecutor Archibald Cox to scrutinize the matter.

Complicitous in the cover-up, many high-level White House officials resigned including Nixon’s Chief of Staff, Bob Haldeman, and his Adviser on Domestic Affairs, John Ehrlichman. In an unrelated case, Vice-President Spiro Agnew resigned facing charges of bribery and tax evasion. Nixon’s own personal counsel, John Dean, agreed to cooperate with the Senate and testified about Nixon’s involvement in the cover-up. In a televised speech, Nixon assured told the American public “I am not a crook.” It seemed like a matter of Nixon’s word against Dean’s until a low-level aide told the committee that Nixon had been in the practice of taping every conversation held in the Oval Office.

Nixon flatly refused to submit the tapes to the committee. When Archibald Cox demanded the surrender of the tapes, Nixon had him fired. Public outcry pressed Nixon to agree to release typewritten transcripts of his tapes, but Americans were not satisfied. The tape transcripts further damaged Nixon. On the tapes he swore like a sailor and behaved like a bully. Then there was the matter of 17 crucial minutes missing from one of the tapes.

Finally, in U.S. v. Nixon, the Supreme Court declared that executive privilege did not apply in this case, and Nixon was ordered to give the evidence to the Congress.

Though Richard Nixon will forever be remembered for the Watergate scandal, his foreign policy accomplishments are worth noting. Here, Nixon reviews troops during his historic visit to China that helped lessen diplomatic tensions.

By this time, the House Judiciary Committee had already drawn up Articles of Impeachment, and Nixon knew he did not have the votes in the Senate to save his Presidency.

On August 8, 1974, Nixon resigned the office, becoming the first President to do so. His successor, Gerald Ford, promptly awarded Nixon a full pardon for any crimes he may have committed while in office. The press and the public cried foul, but Ford defended his decision by insisting the nation was better served by ending the long, national nightmare.

During his years in office, Nixon had brought a controversial end to the Vietnam War, opened communication with Red China, watched NASA put astronauts on the moon, and presided over a healing period in American history in the early 1970s. Despite these many accomplishments, Watergate’s shadow occludes Nixon’s legacy.