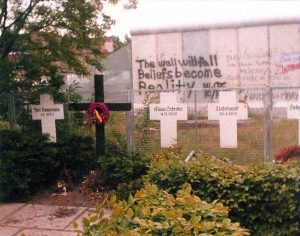 Memorial to the Victims of the Wall, Berlin / Photo by Lyricmac, Wikimedia Commons

Historically, walls have a decidedly mixed record in achieving their goals to keep some people in and other out. While good fences may make good neighbors, as the old cliché has it, neighborliness has not been the reason behind most of history’s major wall projects. Here is a look at ten of the most famous of these insular architectural projects. 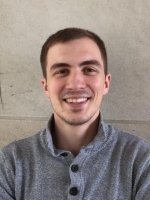 1. The Wall of Jericho 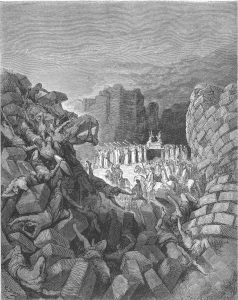 The Biblical Wall of Jericho is one of the earliest examples of a defensive wall constructed by a community. Two sets of walls found in Jericho, and excavated by Ernest Sellin and Carl Watzinger, date back to anywhere between 1950 BCE and 1550 BCE. But the earliest evidence of a wall is believed to date to 7825 BCE. The most famous Wall of Jericho, however, is the one mentioned in the Biblical account of the wall that the Israelites destroyed using the Ark of the Covenant (Book of Joshua). The wall is believed to have stood five feet thick, anywhere between 12 and 17 feet tall, surrounded by a 27-footwide and nine-foot deep ditch. It is hypothesized that the Wall of Jericho was constructed not only for defensive purposes, but also to protect the city from floods and for ceremonial usages. The Tower of Jericho may have been a means to draw individuals into the city. After the wall came tumbling down, according to biblical text, every man, woman, and child in the city of Jericho was put to the sword save for the family who harbored Israeli spies during the siege. 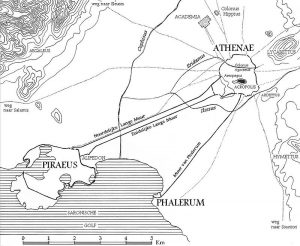 Connecting Athens to her port cities of Piraeus and Phalerum, the “Long Walls” of the Classical Period protected Athenian farmland and ports from Peloponnesian hoplite forces during the Peloponnesian War, 460 – 404 BCE.

Following Xerxes’ invasion of Greece during the Persian War, Themistocles proposed building “Long Walls” in 465 BCE to connect Athens with Piraeus and keep access to their navy and port. Construction began in 461 BCE under the leadership of Cimon. The “Long Walls” are considered a cause of the Peloponnesian War as Sparta and her allies began to fear that Athens, with her walls and growing navy, was becoming too powerful. The second wall, between Athens and Phalerum, was built after the First Peloponnesian War and came to be of paramount importance during the Second Peloponnesian War because Pericles, the leader of Athens at the time, based his strategy around them. The “Long Walls” formed a triangle of protected land between Athens and her ports for farming and transportation. When Sparta would ravage Attica and attempt to draw them out, the Athenians would remain behind their walls and attack the Peloponnese by sea, destroying coastal cities before returning home. The walls were eventually toppled in 87 BCE by Roman general Sulla who strategized to force Athens to surrender to Rome by cutting off Athenian access to its port at Piraeus. 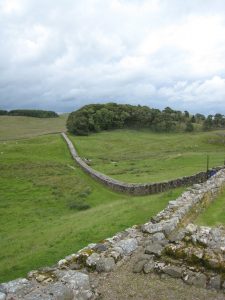 This wall in Northern England was built as a marker of the northern limits of the Roman Empire and stands as a testament to its vast expanse.

Hadrian’s Wall, constructed between 122 CE and 128 CE for inspection by the Roman Emperor Hadrian, was a reaction to rebellions that Rome experienced by the provincial peoples of Britannia. The wall stood an impressive ten feet wide, 16 to 20 feet tall, and 73 miles long, following the course of the Tyne River. Historians disagree on the explicit purpose of Hadrian’s Wall, though it is widely considered to have been an attempt at curbing immigration as well as providing an opportunity to tax anyone crossing the wall. In this endeavor, Hadrian’s Wall was a success. Even when a different wall was constructed during the reign of Antoninus Pius farther north (the Antonine Wall), the Romans opted to garrison its legions along Hadrian’s Wall. Until the end of Roman rule in the province of Britannia (c. 410 CE) Hadrian’s Wall stood strong. When Rome lost its hold on the province, however, the wall was largely dismantled for parts by the “barbarian” populations against whom it had stood.

4. The Great Wall of China

The Great Wall of China: Perhaps the greatest collection of walls in human history.

The Great Wall of China was not always so great. It began as a series of independently constructed walls as long ago as the 7th century BCE. Over time, they became connected into a single vast wall spanning a staggering 5,500 miles during the Ming Era. The wall’s militaristic purpose was to defend China against the multitude of invaders that plagued the borderlands – primarily the Mongols and the Manchu. But the walls provided other economic and social benefits for China, allowing the Chinese to enforce economic duties along the Silk Road as well as decrease the number of immigrants from Central Asia. As a means of maintaining control over citizens of China and their trade, the Great Wall was quite successful. However, the wall failed to keep invaders out entirely. Genghis Khan and his Mongol warriors, the Liao, the Jin, and the Manchus all managed to invade and take territory across the wall. Though this wall has never been altogether destroyed, its maintenance was, and is, such a colossal undertaking that large sections of it have fallen into disrepair over time. 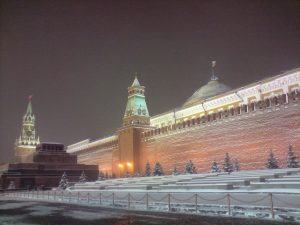 A contemporary view of the Kremlin’s walls which have stood in Moscow since the 15th century.

When Moscow was founded in the 12th century it was fortified only by wooden fences and rudimentary walls. However, under Tsar Ivan I, Muscovy began a concerted project to construct a wall around the Kremlin made of oak (1339-1340). In 1365, these walls were razed and a new wall made of limestone was constructed under the reign of Dmitrii Donskoi in the late 14th century. These walls were never toppled though they were largely redone and renovated by Tsar Ivan III (or Ivan the Great) in the late 15th century. This version of the Kremlin wall, finished in 1495, was over a mile in length varied in height from 16 feet to over 60 feet and in thickness from 11 feet to over 20 feet. The Kremlin walls failed, however, to keep Batu Khan, the Poles, and Napoleon out of Moscow despite never being physically destroyed. While the Kremlin’s walls originally served a solely defensive purpose, they stand today as a powerful symbol of Russian national identity. 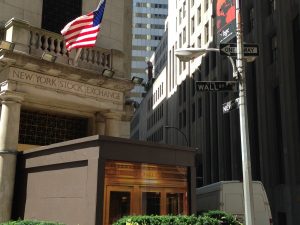 Now synonymous with the New York Stock Exchange, Wall Street is the site of the old wall between the Native Americans and the Dutch settlers of New Amsterdam. Photo by CJ Spaulding.

In the seventeenth century, the wall on what is now Wall Street created a barrier between the Dutch and their Native American neighbors. The fortified wall stretched from Pearl Street, which was one shoreline of Manhattan at the time, to the other shoreline, modern day Trinity Place. During this period, Wall Street was also the marketplace where owners could hire out their slaves. The rampart was removed in 1699, but the corners of Pearl and Wall Street remained a location for trade and business. After the Buttonwood Agreement in 1792 that organized a traders’ association—which was the origin of the New York Stock Exchange—businesses slowly flocked to the area, pushing out residents in the nineteenth century, and the Wall Street of today was born. 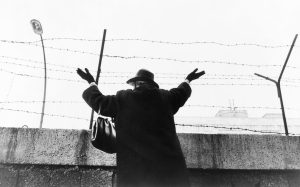 The Berlin Wall divided Germany for nearly three decades and served as one of the most contentious sites of the Cold War.

Officially known on the East German side as the Anti-Fascist Protection Rampart, this infamous wall is an extraordinary example of a society’s attempt to halt the movement of its own people, separating Germans (and often families) into two different worlds. The Soviet, eastern side of Germany had a vested interest in keeping out the ideals, culture, and economic models of the West during the Cold War. Upon completion, the wall stood 87 miles long with another wall running parallel to the original just 300 feet behind it. In its infancy the wall was primarily made of barbed wire but over time it evolved into an extremely formidable border. Concrete, barbed wire, and a no man’s land of coverless space between the walls makes this barrier system one of the most daunting walls in human history. It was not to persist, however. In October of 1989, the East German government decided to allow some citizens to emigrate to West Germany, which resulted in a swarming of the wall checkpoints by thousands of citizens. And on November 9, the Berlin Wall was officially opened. 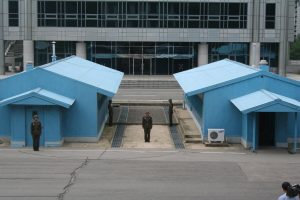 The Korean DMZ has historically been one of the most volatile political regions in the world.

Snaking across the width of the Korean peninsula, this wall creates a 160-mile-long, two-and-a-half-mile-wide buffer zone between North and South Korea. The DMZ was constructed along the 38th Parallel and is considered to be the most heavily militarized border in the entire world. Incidents and incursions continue along the DMZ, although recent peace talks have begun ever so slightly to depressurize the border. The two countries have agreed to allow families divided between Northern and Southern halves of the border to reunite in a rare effort at cohabitation. Such efforts do not erase recent episodes of landmine explosions, cross-boundary rocket fire, and propaganda radio broadcasts, however, but may ease tensions along the political powder keg that is the DMZ. Since the Korean conflict ended in 1953 in a truce, the state of war between Seoul and Pyongyang continues to validate the existence of the world’s most heavily guarded border. This wall stands as perhaps the most effective anti-migrant fortification in all of human history. It has kept the populations of two independent nations almost entirely secluded from one another for over six decades. 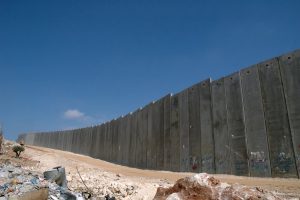 The West Bank Barrier’s construction style is often compared to the Berlin Wall but it serves a much different purpose.

This behemoth of a wall currently runs along the 1949 Armistice Agreement Line (or the Green Line) that separates Israel from the territories of the West Bank. This barrier runs a staggering 330 feet in width at certain places and up to 26 feet high. The primary reasons for the construction of this barrier (which began in approximately 2000) are contentious. The Israeli government states that the wall is being built to protect Israeli citizens from suicide bombers and radical terrorist organizations. Opposition groups argue that the barrier is a land-grab disguised as a defensive perimeter. Though construction on the wall has not yet been completed, some reports indicate that there has been a marked decline in the number of suicide attacks within Israel. 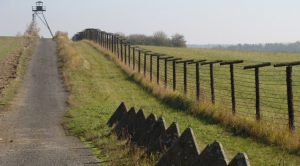 Hungary commissioned the construction of a border structure to slow the stream of immigrants into the country in what is being deemed the European Migrant Crisis of 2015.

Standing 13 feet tall and projected to reach completion across the entirety of the 109 mile long Hungarian-Serbian border by the end of this year, this wall is part of an extremely tumultuous time for border control in Europe. As hundreds of thousands of migrants flee conflict zones in the Middle East, Europe finds itself challenged by the influx of refugees. Hungary, unlike most of its European counterparts, has opted to build facilities and enforce strict border policies instead of facilitating migrant travel. By utilizing tear gas, water cannons, razor wire, and the Hungarian military to deal with the migrants, this most recent emergence of an historic wall will surely be a point of contention for years to come.