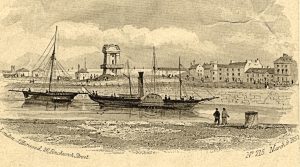 Nativism caused much splintering in the political landscape, and the Republicans benefited and rode to victory in the divisive election of 1860.

In the middle half of the nineteenth century, more than one-half of the population of Ireland emigrated to the United States. So did an equal number of Germans. Most of them came because of civil unrest, severe unemployment or almost inconceivable hardships at home. This wave of immigration affected almost every city and almost every person in America. From 1820 to 1870, over seven and a half million immigrants came to the United States — more than the entire population of the country in 1810. Nearly all of them came from northern and western Europe — about a third from Ireland and almost a third from Germany. Burgeoning companies were able to absorb all that wanted to work. Immigrants built canals and constructed railroads. They became involved in almost every labor-intensive endeavor in the country. Much of the country was built on their backs. 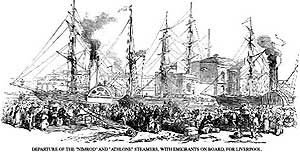 Letter to the London Times from an Irish Immigrant in America, 1850

I am exceedingly well pleased at coming to this land of plenty. On arrival I purchased 120 acres of land at $5 an acre. You must bear in mind that I have purchased the land out, and it is to me and mine an “estate for ever”, without a landlord, an agent or tax-gatherer to trouble me. I would advise all my friends to quit Ireland — the country most dear to me; as long as they remain in it they will be in bondage and misery.

What you labour for is sweetened by contentment and happiness; there is no failure in the potato crop, and you can grow every crop you wish, without manuring the land during life. You need not mind feeding pigs, but let them into the woods and they will feed themselves, until you want to make bacon of them.

I shudder when I think that starvation prevails to such an extent in poor Ireland. After supplying the entire population of America, there would still be as much corn and provisions left us would supply the world, for there is no limit to cultivation or end to land. Here the meanest labourer has beef and mutton, with bread, bacon, tea, coffee, sugar and even pies, the whole year round — every day here is as good as Christmas day in Ireland. 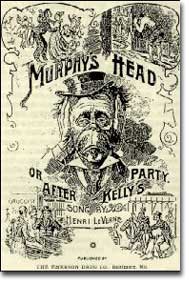 Anti-Irish sentiment permeated the United States during the Industrial Revolution. The prejudice exhibited in advertisements like this one sometimes led to violent outbursts.

In Ireland almost half of the population lived on farms that produced little income. Because of their poverty, most Irish people depended on potatoes for food. When this crop failed three years in succession, it led to a great famine with horrendous consequences. Over 750,000 people starved to death. Over two million Irish eventually moved to the United States seeking relief from their desolated country. Impoverished, the Irish could not buy property. Instead, they congregated in the cities where they landed, almost all in the northeastern United States. Today, Ireland has just half the population it did in the early 1840s. There are now more Irish Americans than there are Irish nationals.

In the decade from 1845 to 1855, more than a million Germans fled to the United States to escape economic hardship. They also sought to escape the political unrest caused by riots, rebellion and eventually a revolution in 1848. The Germans had little choice — few other places besides the United States allowed German immigration. Unlike the Irish, many Germans had enough money to journey to the Midwest in search of farmland and work. The largest settlements of Germans were in New York City, Baltimore, Cincinnati, St. Louis and Milwaukee.

With the vast numbers of German and Irish coming to America, hostility to them erupted. Part of the reason for the opposition was religious. All of the Irish and many of the Germans were Roman Catholic. Part of the opposition was political. Most immigrants living in cities became Democrats because the party focused on the needs of commoners. Part of the opposition occurred because Americans in low-paying jobs were threatened and sometimes replaced by groups willing to work for almost nothing in order to survive. Signs that read NINA — “NO IRISH NEED APPLY” — sprang up throughout the country. 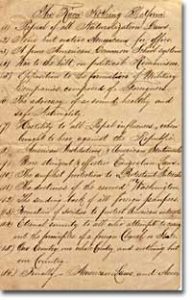 The Know Nothing Party’s platform included the repeal of all naturalization laws and a prohibition on immigrants from holding public office.

Ethnic and anti-Catholic rioting occurred in many northern cites, the largest occurring in Philadelphia in 1844 during a period of economic depression. Protestants, Catholics and local militia fought in the streets. 16 were killed, dozens were injured and over 40 buildings were demolished. “nativist” political parties sprang up almost overnight. The most influential of these parties, the Know Nothings, was anti-Catholic and wanted to extend the amount of time it took immigrants to become citizens and voters. They also wanted to prevent foreign-born people from ever holding public office. Economic recovery after the 1844 depression reduced the number of serious confrontations for a time, as the country seemed to be able to use all the labor it could get.

But Nativism returned in the 1850s with a vengeance. In the 1854 elections, Nativists won control of state governments in Massachusetts, Connecticut, Rhode Island, New Hampshire and California. They won elections in Maryland and Kentucky and took 45% of the vote in 5 other states. In 1856, Millard Fillmore was the American Party candidate for President and trumpeted anti-immigrant themes. Nativism caused much splintering in the political landscape, and the Republicans, with no platform or policies about it, benefited and rode to victory in the divisive election of 1860.