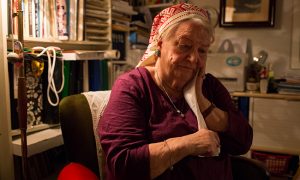 Lament teacher Pirkko Fihlman wears a traditional Käspaikka scarf during a gathering at her home in Helsinki. / Photo by Katri Heinämäki.

In Finland, lament singing is experiencing a revival, one sad song at a time.

It was nearly 3 o’clock on a Tuesday afternoon, and Pirkko Fihlman’s living room on the outskirts of Helsinki was filled with black-and-white family photos, porcelain figurines of angels and birds, and embroidered rococo chairs. The clink of tea cups fell silent, and then Excell squeezed her eyes closed, clenched her fists, and began to sing a lament in Finnish.

“I took pills for my depression

just to smother my emotions.

Doctors said that I would need them,

but I learned to cry without them.

So I stopped taking the tablets,

then I let my feelings rise up

for my mother when she passed on,

for my marriage when he quit me,

left me as a single mother,

with a hard job and no weekends.

Now I weep without taking pills,

yet I still feel very angry,

and the fury seems well-founded,

but the feelings will not hurt me.”

Excell’s lyrics may be modern, but the style of singing comes from an older place.

In Finland, the ancient musical tradition known as lament singing is seeing a revival.

In the past, the custom was observed at funerals, weddings, and during times of war. But today, practitioners have a modern application for it: musical therapy. By providing an opportunity to process emotions through song, lament singing can confer mental health benefits to modern practitioners.

“[In lament] people can express themselves,” Fihlman says. “Very often people [in my courses] make laments of their grief. They miss their parents or they have troubles in their marriage or maybe they were hurt in childhood and they never had a chance to bring it up.”

While the custom resembles many “new age” practices, Finnish lament singing has a feature that those neo-spiritual systems don’t: It teaches a tradition specific to the region instead of borrowing from other cultures.

“The function of [lament singing] was to establish positive contact with your ancestors, the dead, and help them in some way,” says Jim Wilce, a professor of anthropology at Northern Arizona University and author of numerous books and papers on lament singing around the world. Originally, he says, the tradition wasn’t about emotional healing.

Which, according to Wilce, is what makes the revival so unique.

“In every traditional lament … you have a connection with what I call ‘the divine powers,’” says Eila Stepanova, a folklore studies Ph.D. at the University of Helsinki. “[This isn’t] a Christian god. It’s something in between—an older layer of traditional beliefs.” 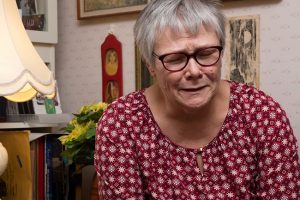 While lament singing exists in communities from Bangladesh to New Zealand, according to Wilce, and has even been documented in the ancient poem “Beowulf,” the form being practiced in Finland has its roots in the area now known as the Republic of Karelia—the region on the Russian side of the Finnish border. Stepanova says the traditional laments—sung for funerals, weddings, war—were performed to help people move from one world to the other, be it to the land of the dead, to a new family, or to the battlefield. At ceremonies for the dead, for instance, laments were sung to wake deceased members of the family in the other world to meet new arrivals.

But traditional laments weren’t simply a style of song: They were a unique language in which nothing was ever named directly.

“For example, you have substitute names for all personal relations [and] for objects or phenomenons,” says Stepanova. “So in lament language, when you talk about your mother, you don’t use the word mother. You say, ‘the dearest woman who brought me [into] the sweetest world who carried me,’ or ‘my dear carrier,’ or ‘my dear cherisher.’”

“She is always the miserable [one]. She never says the word ‘I,’” explains Stepanova. Instead, when describing herself, the lamenter might say she’s the “miserable body,” “woman of great sorrows,” or “body made of tears.”

Stepanova’s mother published the first lament dictionary in 2004 documenting approximately 1,400 different metaphors for words used in the songs. Like any language, it’s evolving with modern times. Cars can be “headless horses,” phone calls can be “messages that come through metal strings,” and televisions can be “talking boxes.”

But while Finland is seeing a revival—instructor Fihlman says she has conducted nearly 200 courses with almost 2,000 students—other parts of the world are seeing a decline in the traditional practice.

Wilce says that around the world lament singing is threatened. In Bangladesh, for instance, practitioners often face physical violence in rural Muslim societies.

“People are being shamed by their relatives,” says Wilce. “By fundamentalist Christian missionaries in Papua New Guinea and [in] other places by the values of rationality and urbanizing modernity.”

Yet in Finland, the tradition is blossoming, despite a history that has often threatened its survival. In Karelia, Fihlman says that lament singing existed in rural communities for generations, but it was viewed as a pagan tradition by Orthodox and Lutheran Christians and often driven underground. Urbanization also threatened the continued existence of lament singing. In the last century, as young people moved away from their hometowns to find jobs and schooling in cities, villages began to disappear, along with lament singers. And in the early days of the Soviet Union, authorities often employed lament for ideological and propaganda efforts, creating laments that expressed support for the Soviet system and its leaders.

Stepanova says that, eventually, only old people told ancient stories and sang antique laments. “They were museum items, and they stopped being a living tradition among people,” she says.
But somehow, adds Fihlman, it survived. “We don’t have those old people anymore,” she says. “But [now] we have this new generation.”

Minna Hokka wore a candy-striped turtleneck sweater in chartreuse, cream, and maroon. Fihlman, Excell, and other lamenters looked on as she raised her head and began singing. Unlike Excell’s lament, Hokka’s was a historical ode recalling Karelia’s bitter history with Russia.

“To the people of Karelia,

souls and spirits born in beauty:

Through the windows were your green fields,

in the blue skies larks were singing,

saints and icons stood in silence,

Kanteles echoed in the dark rooms,

and the stars blinked in the night sky,

but your thoughts were wrapped in darkness:

iron hail rained on your rooftops.”

Hokka, 41, is part of the new generation learning from Fihlman. She says she hopes to start composing laments for young people struggling with addiction.

“Nowadays crying is seen as losing face, so people avoid and fear it,” says Hokka. “Finland needs its tears.”

For Hokka and other lamenters, the practice isn’t just a hobby: It’s an ancient tradition now finding contemporary use. And in Fihlman’s home on the outskirts of Helsinki, it’s taking root with a new generation, one sad song at a time.

“Does [lament singing] have connection to the past? To tradition? To beliefs or values?” Stepanova says. “Or do we make it a museum item behind glass and go and think, Ahh, nice, yes, and forget about it? It depends on us.”