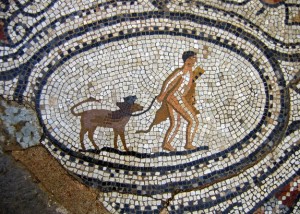 A mosaic of Hercules with pet Cerberus. Photo: snarl

Dogs played a special role in ancient Greek society and mythology; Cerberus guarded the gates of Hades, the goddess Artemis used dogs in her hunt, and Greek citizens employed dogs for hunting and protection.

To the ancient Greeks, picking your new pup was an important decision, just as it is today. But, according to Stanford University researcher Adrienne Mayor, writing for Wonders & Marvels, the process could have been just a little bit different.

Like moderns, the ancients looked for an adventurous and friendly nature, but one test for selecting the pick of the litter seems rather heartless today. Let the mother choose for you, advises Nemesianus, a Roman expert on hunting dogs. Take away her puppies, surround them with an oil-soaked string and set it on fire. The mother will jump over the ring of flames and rescue each puppy, one by one, in order of their merit.

Mayor says that dogs were typically given short names that evoked ideas of things like power, speed, or beauty. Then again, the more things change, the more they seem to stay the same. According to Mayor,