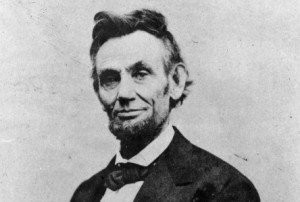 That we are a country divided is nothing new. We have seen division in our country previously. That we continue to allow ourselves to become more and more divided demonstrates we still have not learned to listen to President Abraham Lincoln. Twenty-two years before he was elected President of the United States, Abraham Lincoln addressed the issue of division in the young country and was convinced that the greatest threat to our country could only come from within :

Shall we expect some transatlantic military giant to step the ocean and crush us at a blow? Never! All the armies of Europe, Asia, and Africa combined, with all the treasure of the earth (our own excepted) in their military chest, with a Bonaparte for a commander, could not by force take a drink from the Ohio or make a track on the Blue Ridge in a trial of a thousand years. At what point then is the approach of danger to be expected? I answer. If it ever reach us it must spring up amongst us; it cannot come from abroad. If destruction be our lot we must ourselves be its author and finisher. As a nation of freemen we must live through all time or die by suicide.
Abraham Lincoln
“The Perpetuation of Our Political Institutions”
Springfield Illinois
January 27, 1838

In 1855, Abraham Lincoln wrote about the rise of the American Party, also known as the “Know-Nothing” Party, who were anti-immigrant, anti-catholic and pro-slavery:

When the Know-Nothings get control, it [the Declaration of Independence] will read: “All men are created equal except negroes, foreigners and Catholics.” When it comes to this I should prefer emigrating to some country where they make no pretense of loving liberty — to Russia, for instance, where despotism can be taken pure, and without the base alloy of hypocrisy.
Abraham Lincoln – 1855

Does the rhetoric of the”American Party” in the 1850s, more commonly known as the “Know Nothing Party”, sound all too familiar? Sound like what Donald Trump is saying about certain immigrants and a specific religion? How sad that some United States citizens are so worried about stopping illegal immigration that they fail to understand that those men and women are literally risking their lives to get to our country. Must that be part of anyone’s campaign platform? Must we close the door to those who believe entering our country is something for which they are willing to risk dying to achieve? Can we not understand President Lincoln’s warning and do something to stop this once and for all?

In President Lincoln’s First Inaugural Address, given in 1861 after the start of the Civil War, he appealed to Southern States to lay down their weapons and return to the Union. He knew that the young country which he referred to as “the last best hope of earth” must survive as one united country in order for its and any other democratic form of government to survive:

We are not enemies, but friends. We must not be enemies. Though passion may have strained it must not break our bonds of affection. The mystic chords of memory, stretching from every battlefield and patriot grave to every living heart and hearthstone all over this broad land, will yet swell the chorus of the Union, when again touched, as surely they will be, by the better angels of our nature.
Abraham Lincoln
First Inaugural Address
Monday, March 4, 1861

On a battlefield in Gettysburg in 1863, President Lincoln framed the war’s meaning as a moment in time when the nation must continue its fight to preserve the government created by the Constitution. A new government that had never been tried and was now being tested. A new government which must succeed:

…that we here highly resolve that these dead shall not have died in vain — that this nation, under God, shall have a new birth of freedom — and that government of the people, by the people, for the people, shall not perish from the earth
Abraham Lincoln
The Gettysburg Address
November 19, 1863

In his Second Inaugural Address, with the end of the Civil war in sight, President Lincoln did not speak of exacting harsh judgments against the Southern States, despite calls from members of his own Republican Party to do so. He sought and wanted reconciliation:

With malice toward none, with charity for all, with firmness in the right as God gives us to see the right, let us strive on to finish the work we are in, to bind up the nation’s wounds… to do all which may achieve and cherish a just and lasting peace among ourselves and with all nations.
Abraham Lincoln
Second Inaugural Address
Saturday, March 4, 1865

Having experienced war throughout his first term in office, President Lincoln also called on his fellow citizens to do everything to find peace with other nations. Such was his philosophy. He saw the effects of war. He understood what happens when divisions tear apart the very fabric of the country and threaten its form of governance. He accepted war to protect and preserve the Union created by the Constitution.

Donald Trump has gained support from a vocal group of narrow-minded people with his campaign slogan “Make America Great Again”. But what he and his supporters want to restore is an America that never was and must never become. An America that only allows the wealthy to have opportunities. An America that closes its borders, closes it doors and shuts out the rest of the world unless there is something we can take from those weaker than us.

Whatever rights, whatever freedoms we have, we owe, not to ourselves, but to the men and women who fought and often gave their lives to achieve. From The War of Independence to the Civil War to the fight for Women’s voting rights to the fight for Civil Rights and two World Wars, people were willing to take a stand, to stand together, to do what had to be done, to even give their lives.

Isn’t it time we honored their sacrifices? Isn’t it time we rededicate ourselves to moving this country even one step closer to fulfilling the promises which began with the Declaration of Independence, were framed in the Constitution and preserved by the Union victory in the Civil War? Isn’t it time that we, as a nation, learn that when any group is denied basic rights, we are all just a little less freer? That to deny anyone equality is to deny ourselves equality?

We cannot and must not allow this moment to pass us by as we stand and watch. Isn’t it time we learned those lessons President Lincoln tried and ultimaetly died to teach our country?