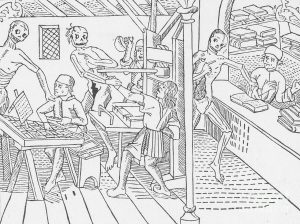 The Danse Macabre, A woodcut from 1499, currently at the Bibliothèque Nationale, Paris by an Unknown Artist

The Black Death was a new and terrifying epidemic, which raced through several continents without any known cause. By looking at first hand accounts of the Black Death in Europe, as well as modern day perspectives, is it possible to tell whether the immediate responses to the disease can provide an explanation about the medical understanding of the time?

Here we will discuss the different explanations of the causation of the disease, such as cosmic reasons, atmospheric corruptions, and bad lifestyles. It will then continue to explore the different remedies that were prescribed throughout Europe, and throughout different social status’. Evidence from both of these sections will be analysed in order to establish the medical understanding during this period. Finally, we will briefly discuss a couple of historiographical issues which need to be taken into account in order to understand the significance of the evidence fully.

There were many different medical and scientific explanations for the Black Death, ranging from stellar configurations, to bad lifestyle choices. Whereas modern day opinion would dismiss the idea of astrology, to contemporary audiences it was a well-known and well established fact, which physicians and academics were hesitant to ignore. The report of the Paris Medical faculty in 1348 states the belief that the ‘first cause’ of the disease was the configuration of the heavens. The frequent mention of the three planets of Aquarius, is also referred to by fourteenth century astrologer, Geoffrey de Meaux, who explains that the superior stars of Aquarius affect the lesser stars, which represent the ‘common people’ of society. He therefore concludes that the pestilence would infect them more so than those of a higher status. Simon de Convino of France also describes a celestial court case, in which the human race stands trial. Beneditow comments that this theory would have done little to encourage those contaminated with the disease, as there was very little that man could do in order to prevent or cure the plague, thus demonstrating that the medical understanding of the period was somewhat limited, and reliant on historic beliefs rather than more advanced theories. It does however, highlight a certain amount of scientific understanding, as well as demonstrate the continual use of ‘traditional’ medicines and beliefs. This was a similar issue when considering the concept of atmospheric corruption, although it did inspire an improvement in hygiene.

Atmospheric corruption involved many different aspects, such as poisonous gasses concealed within the earth, seasonal influences, and the strong stench arising from both the buried and unburied corpses. It was the fear of atmospheric contagion which prompted Venice to refuse entry to ships in ports, and keep them away for thirty days. Evidence of the belief in atmospheric corruption is recorded in a plague tract from c. 1354, written by John Jacobus, a royal and papal physician. Jacobus puts forward the suggestion that the disease contaminates both the air and the ground, as a result of the plague infected bodies beneath, and the stench of the dead carrion from above.Jacobus (situated in Montpellier) states that the air was able to penetrate the body due to open pores, caused by a certain humoral imbalance. It was a common belief that the Galenic theory of humors meant that too much blood would make a person hot and moist, and would therefore have open pores, and thus a perfect entrance in which the corrupted air could infiltrate. This was a theory which was also supported by others, such as John of Burgundy, in his 1365 treatise. The evidence shows that the physicians had understanding of contagion in this period, and were therefore able to use this knowledge to further advance their medical understanding, such as identifying the ways in which the disease could be spread through direct contact.

The advice given in many different chronicles and treatises would suggest that a bad lifestyle was also believed to cause disease. This follows the Galenic theory, and implies that people were to avoid having ‘hot and moist’ characteristics. This could include reducing the humor of blood (perhaps by cuts or leaches). The Paris medical faculty also suggests that bad lifestyle will encourage evil humors, and will therefore open up the pores. The author of this document believed that a person maintaining a bad lifestyle had; too much exercise, too much sex, bathed too often, was thin and weak, worried persistently, were young, were women, and those who had a ‘ruddy complexion’. Whilst this may have some religious connotations (for example the idea of abstinence), this example of a bad lifestyle can show historians that contact was not recommended. One source forbids the use of public baths, as the water was easily infected, and therefore the disease was easily spread, although again, this was partly due to religion, and the immoral reputations of the baths.  Contagion was something which was clearly understood during this period, even if the evidence shows that it was not considered to be the most important at the time. Further understanding of the medieval medical knowledge can be gathered through the remedies prescribed, including advice on how to live well, and close the pores to deny access to the pestilence.

Remedies were frequently prescribed for the protection of cities, for example the introduction of quarantine in Venice. However, it is important to remember that medical advice differed throughout various countries, cities and social stratification. The evidence which is available to historians in present day demonstrates the advanced nature of medieval medical understanding, but was only truly available to those of a higher social standing. The Paris medical faculty, for example, was commissioned by King Philip VI of France, indicating that the remedies offered were intended for royalty only. The profession of a physician would suggest a person of high education, and therefore high status. A Montpellier doctor wrote in 1349 that the epidemic was airborne, and could kill in high numbers. He described this plague as a ‘windy moisture’, and therefore recommended against the gaze and breath of those infected. Although this advice does confirm a competent medical understanding in the eyes of modern historians, it is difficult to guarantee the types of audiences it would have reached. Whilst there are many remedies written by those of a higher classification, many were recommended for the protection of whole cities, including those who were poorer.

Remedies for the benefit of the whole of society are usually apparent in laws and regulations set out by certain cities. For example, Pistoia in Italy introduced fines by 1348, which attempted to initiate a certain amount of hygiene to the city. These ordinances include the depth at which bodies were to be buried. Although originally intended in order to avoid the foul stench produced by corpses, can be viewed as an advanced medical theory, as it would have protected the people within the city from coming into contact with infected corpses. London introduced butchery regulations by 1371, in order to protect the city from foul smells due to the unsanitary conditions when butchering animals. This was followed in Cambridge in 1388. By 1374, Milan had followed Venice’s example and ordered anyone displaying symptoms of plague to leave the city until ‘he either dies or recovers’. These laws can show modern day historians how advanced the medical understanding was within these different cities, showing the promotion of hygiene, as well as quarantine. Although these laws were most probably aimed at whole cities, including both higher and lower orders of society, it cannot be guaranteed that this advice was indeed reaching all members of society.

Whilst all the evidence presented above demonstrates the extent of the late medieval medical understanding in Europe, it is important to be aware of a few historiographical issues present. L. Garcìa Ballesters’ evaluation of the medical knowledge states that it is important to ‘isolate these earliest perceptions and reactions to the Black Death from the perceptions and reactions to subsequent plagues’. This is vital, as it is the first emergence of the Black Death which really demonstrates the medical knowledge available during the period, after the arrival of a new and terrifying disease. This idea is also relevant when discussing the different medical standards between the late medieval and modern periods. I have mentioned the increase of hygiene, which is true in the context of late medieval Europe, yet seems completely alien to modern audiences when remedies include avoidance of bathing. This is a view which has been supported by A. Cunningham, who states that past medicine has been misunderstood due to the concept of laboratory diseases. Once this is understood, historians can truly understand the extent of the late medieval medical knowledge.

Overall, these collection of sources have demonstrated that the immediate responses to the Black Death displayed a high amount of medical understanding, in the context of the fourteenth century. Throughout Europe, there was a general understanding that the disease was contagious, through either atmospheric corruption, or direct contact. It is evident through the explanations given by different eye witness accounts, as well as the prescribed remedies. Whilst there are both explanations and remedies which modern researchers would define as completely inaccurate, the actions taken and the most common believed causes demonstrate that the medical understanding during this period was not completely hypothetical, and can therefore be seen as relatively accurate.