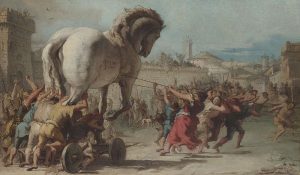 The Procession of the Trojan Horse in Troy, by Giovanni Domenico Tiepolo (1773) / National Gallery, Wikimedia Commons

Oral traditions provide valuable information, and proper historiography can discern as much likely truth as possible in combination with other sources.

It all started with a stray goat.

On an otherwise nondescript day in the spring of 1947, a young Bedouin boy searched for a goat that had strayed from his flock just northwest of the Dead Sea. While he was looking, Muhammed the Wolf, as the boy was known, noticed a series of small caves in the limestone cliff above him. Thinking his goat may have gone into one of those caves, and not wanting to make the dangerous climb himself, Muhammed picked up a rock and threw it in.

What he heard was totally unexpected. He didn’t hear the bleat of a startled goat or the dull thud of a rock landing in the soft sand in the base of the cave. Rather, he heard the crisp, oddly tinny sound of shattering ceramics. His curiosity piqued, Muhammed made the difficult climb to the cave entrance. Once his eyes adjusted to the dim light inside, he was startled to see seven tall, cylindrical jars that contained documents no human had beheld for nearly 2,000 years: the Dead Sea Scrolls.

Seven decades later, we now know that the Dead Sea Scrolls corpus includes more than 10,000 fragments of more than 800 different secular and religious texts. Every book of the Hebrew Bible is represented in the collection except Esther. There are 27 copies of the Book of Isaiah, including one that is in such good condition it is nearly 66 feet long when unrolled. The Ten Commandments are represented. There are scrolls listing detailed community rules. Another, the War Scroll, describes a hypothetical 49-year-long war between the “Sons of Light” and the “Sons of Darkness,” which the good guys ultimately win. There is even a treasure map written on a scroll made of copper! (Its true meaning remains a mystery; no treasure has ever been found based on its many cryptic directions.) And on and on.

The vast majority of scholars now believe the texts were written, transcribed, and preserved by an isolationist group of Essenes living in Qumran, a small village located about a kilometer from the caves. (The Essenes were one of four major groups of Jews living in Israel at the time, along with Pharisees, Sadducees, and Zealots.) 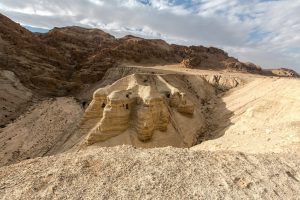 These are the caves where many of the Dead Sea Scrolls were discovered in 1947 / Photo by Lux Moundi, Flickr, Creative Commons

Several weeks ago, an exhibition called Dead Sea Scrolls closed after a nearly six-month run at the Denver Museum of Nature & Science, where I work as an archaeologist-curator. I served as the scientist assigned to the exhibition. My task in that capacity was to train a large and dedicated corps of volunteers, to arrange public presentations by specialist lecturers, and to provide interviews with local and regional media. I’ve been assigned to several such exhibits over the years, and it’s one of the things I love about my job. I get to study some of the coolest archaeological topics out there, even when they aren’t the focus of my own research.

I’m not religious, so I approached Dead Sea Scrolls with the same degree of intellectual detachment and scholarly curiosity with which I have approached other exhibitions, including A Day in Pompeii, Maya: Hidden Worlds Revealed, and Traveling the Silk Road. When I first started working on the Dead Sea Scrolls exhibit about a year ago, however, I had a nagging suspicion that this experience was somehow going to be different. I didn’t know why, but I now realize that it led me to a scholarly revelation.

When I entered graduate school as an archaeologist in the late 1980s, I was told in no uncertain terms to discount the narratives from Native American oral history. Why? Largely because of the children’s game of telephone! (If case you’ve forgotten: Get a bunch of kids in a circle. Tell one a secret. Tell her to tell the person next to her. Repeat until you come all the way around the circle. By the time the secret gets back to you, it’s totally changed, if not unrecognizable.) Though it is a compelling and seductive argument-by-analogy, it’s overly simplistic and belies a fundamental misunderstanding of how oral history actually works in human societies. History is not kept by children playing games. It’s kept by specialists.

If you are the keeper of history in a society that does not have a written language, your job is to preserve the story verbatim. You have to apprentice and train for many years, and you have to go through tests and approval processes before you are deemed qualified to serve as keeper.

What does this have to do with the Dead Sea Scrolls? 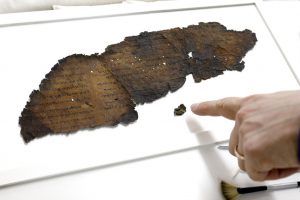 Oren Ableman, a Dead Sea Scrolls researcher of the Israel Antiquities Authority (IAA)—who examined scroll fragments with the aid of advanced imaging equipment and revealed a previously unseen script—points at a small scroll fragment containing the hidden text at the conservation laboratory of the IAA in Jerusalem on May 2, 2018. / Photo by Gali Tibbon, Getty Images

As an archaeologist, if I have to dismiss the veracity of Native American oral traditions simply because they are not written down, then simple logic forces me to dismiss some of the accounts written in the Dead Sea Scrolls, which also began as oral tradition. To do anything else would be to maintain a racist double standard.

A few years ago, linguists and a geographer in Australia documentedinstances in which humans have maintained accurate oral histories over 400 generations and up to 10,000 years. And according to historian Roger Echo-Hawk, Pawnee oral traditions document events that occurred during the last glaciation (at least 11,000 years ago), including humans crossing the Bering Sea into North America.

All of this confirms something that I’ve long suspected: Most humans, until very recently, desired and maintained cultural stability, not change. Change was a threat and was embraced only when absolutely necessary. And that is why Native American oral histories—and all oral histories, for that matter—were a reliable way of recording and learning from the past for thousands of years before writing was invented.