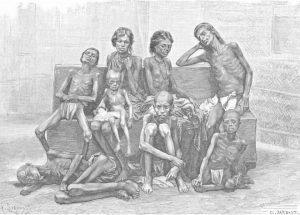 It has been a difficult summer for India.

Drought and a searing heat wave have affected an astonishing 330 million people across the country.

But this summer also marks the 150th anniversary of a far more terrible and catastrophic climatic event: the Orissa famine of 1866.

Hardly anyone today knows about this famine. It elicits little mention in even the densest tomes on Indian history.

There will be few, if any, solemn commemorations. Yet the Orissa famine killed over a million people in eastern India.

In modern-day Orissa state, the worst hit region, one out of every three people perished, a mortality rate far more staggering than that caused by the Irish Potato Famine.