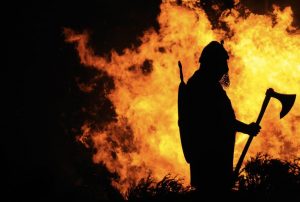 Why an intrepid trio went to the Isle of Eigg armed with Viking shields and poetry torecreate a funeral ceremony from 1000 years ago. 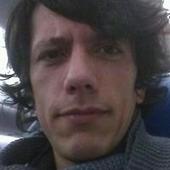 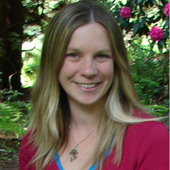 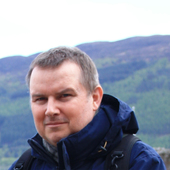 When most people think of Vikings, they think of the usual stuff: longships, raiding, fighting, loot, burial and paganism. Scholars are increasingly aware that the reality was more complicated, but no doubt the popular associations will remain – and are reinforced by the likes of last year’s Viking exhibition at the British Museum in London.

Yet one aspect of Viking culture that gets little attention is funeral rites. There are very few sources that allow us to reconstruct in precise detail what happened during these complex ceremonies – there are no descriptions of funerals in Scotland, for example. But we can get a sense of Vikings’ burial custom from a 10th-century eye-witness account from Russia by the famous Arab traveller Ahmad ibn Fadlan, and from some references in the ancient poem Beowulf. 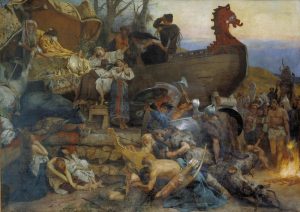 They suggest that songs and chants about the deceased were performed, along with processions in circular directions around mounds, and the use of simple percussion instruments. In the account by ibn Fadlan, which was the basis for the beginning of the Hollywood film The 13th Warrior, the funeral takes ten days to prepare and is presided over by a character described as the Angel of Death.

It features feasting and excessive alcohol consumption. A ship containing the deceased is placed on a funeral pyre, with grave goods alongside including his weapons, silk quilts and a couch covered with cushions. The deceased is dressed in specially prepared, expensive funeral clothes.

The ceremony also involves the sacrifices of various animals and a slave girl. Before the slave girl is simultaneously strangled by two men and stabbed by the Angel of Death, she is forced to have sex with many of the men who are present. The ship is then set alight and later a mound is raised over the remains, upon which is placed a piece of wood inscribed with the name of the dead man and his king.

This gives some indication of how elaborate and spectacular a Viking funeral could be. To help understand what these ceremonies could be like and the likely effect on the participants, we carried out a re-enactment project on Kildonnan on the western Scottish Isle of Eigg.

Kildonnan is one of many sites in which Vikings were buried in the British Isles, though there is no evidence of animal or human sacrifice. We know that the deceased was buried in a grave rather than cremated – just like us, Vikings did both.

In August 2014, with the help of adults and schoolchildren from the local community at Kildonnan, we staged two re-enactments of a Viking funeral procession at two original burial mounds that date back to between 900 and 950. When they were excavated in 1875, they contained various grave goods including two swords, an axe, a spear, two brooches and a sickle, all of which are now in the National Museum of Scotland in Edinburgh. 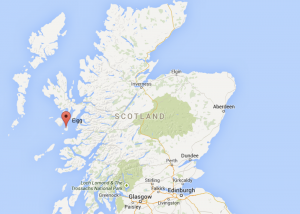 We brought Viking-style shields with us and invited participants to bang these with sticks in time to the singing (which can be heard here). Our aim was certainly not for accuracy but to create an atmosphere through music, sound and movement which would in some way resonate with our historical knowledge of Viking funerary customs and with the location in which the performances were taking place.

As part of the rite we chose to sing the first four lines of a Viking-age poem, Sonatorrek, to the rhythm of a rimur (Icelandic poetic form):

I´ll make offerings to Odin
Though not in eagerness,
I´ll make my soul´s sacrifice
Not suffer silently.

What came out of it

Many of those taking part hadn’t previously been aware of the existence of the Viking burial mounds at Kildonnan. Having the time and resources to explore the site and some of the funerary practices which may have taken place there more than 1000 years ago created a great sense of curiosity and interest.

Some said it increased their awareness of the spiritual importance of Kildonnan through history. One person said: “I liked the idea that I was following in the footsteps of Vikings so that I knew a little of how they felt.” Another said: “The beat from the shields at the Viking graves all felt like you were back in time doing it for real.”

Performing the rituals also allowed participants to be directly involved in the experience. Instead of just “attending” a Viking funeral, they were part of it. One participant said: “It felt very involving. I enjoyed that it felt like we were all taking part rather than just observing and listening. This helped to create atmosphere.”

Finally, we all became aware of the power and beauty of the landscape within the context of funerary ritual. Participants expressed a feeling of freedom and transition, and an understanding of the location as somewhere to “free the soul from the body”. 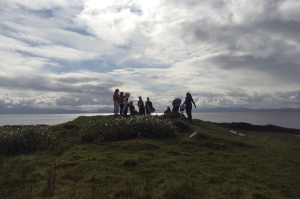 Being in tune with the surrounding landscape seemed to allow participants to be at ease and experience what a sorrowful occasion in relative calm. One person said it felt, “peaceful, sad – the beauty of the place, the music and the sounds of nature made me feel I was saying goodbye to someone”.

The different sensations that were sparked by the landscape resonate with what we know about humans’ natural tendency to bond with and be surrounded by other living things, and the fact that different environments can help to restore people’s bodies and minds.

Close interaction with nature has beneficial consequences for humans. It seems that even at times of distress, such as funerals, even pretend ones, such connections allow us to digest information in a more positive way.