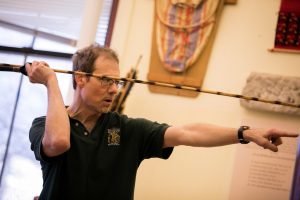 During Wintersession, students learn to make and use the technology that revolutionized human life. The atlatl, or spear-thrower, is a 10,000-year-old tool developed independently across the globe by cultures from the Arctic to New Zealand. The workshop takes place in the Peabody Museum at Harvard University. Andrew Majewski (pictured), the workshop instructor, demonstrates how to throw an atlatl during the workshop.

Wintersession course on the atlatl gives students a hunter’s-eye view of 10,000 BCE

Just outside the high-tech setting of Harvard’s Biological Laboratories, students were engaged in a decidedly low-tech activity: throwing spears across the quad.

A group of six were trying their hands at using an atlatl, an ancient spear-throwing device that by 10,000 B.C. had spread around the world, according to Andrew Majewski, education specialist for the Peabody Museum of Archaeology & Ethnology and the instructor of the Wintersession course.

Simple in design and use, the atlatl is essentially a short stick, roughly 2 feet long, with a spur or hook on one end to hold the butt of a thin, light spear, sometimes fletched like an arrow and called a dart. During a talk in the Peabody Museum’s education classroom before students headed outside, Majewski explained that the atlatl — developed thousands of years before the bow and arrow — works by giving the thrower additional leverage that can greatly increase the force of the throw.

The advantage in range and velocity made a big difference to prehistoric hunters, Majewski said, allowing them to take aim at megafauna such as mammoths without having to get dangerously close.

“It was as revolutionary a technology for these people as the computer is for us,” Majewski said. “It allowed people to hunt big game for the first time.”

Students had to master the tricky balancing act involved in preparing for a throw, with the atlatl cocked aside their heads and a dart nocked onto the spur and balanced on top. The dart is held in place with a forefinger and thumb while the other three fingers grip the atlatl handle. During the throw, students had to release the two fingers and the dart at the right point while keeping hold of the atlatl.

After the first tentative tosses — and with coaching and encouragement from Majewski — students gained confidence. Darts flew through the air and skipped over the hard ground, skittering into a snow bank.

“What we’re doing now is considered experiential archaeology, understanding the lives of our forebears by trying their skills ourselves,” Majewski said. 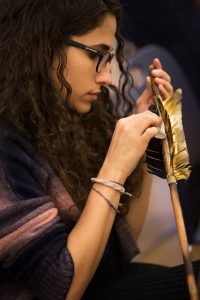 Buse Aktas, a Ph.D. candidate in mechanical engineering, adds feathers to her atlatl. 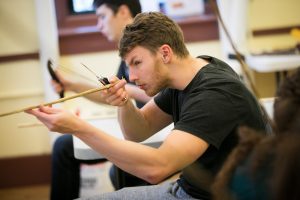 Paul O’Hara ’18, an archaeology concentrator from Cabot House, checks the straightness of his atlatl.

The class, “Making and Using an Atlatl Spear-Thrower,” was suggested by Polly Hubbard, director of education for the Peabody and Semitic museums, both part of the Harvard Museums of Science & Culture. Hubbard noticed Majewski’s interest in atlatl technology and suggested he develop the course. The goal would be to give students a taste of archaeology and encourage them to think of the museums as a resource, whether for their studies or their personal interests.

“I tremendously enjoyed putting together all the different components of this workshop,” Majewski said. “I’m trying to get others excited about what excites me.”

Majewski also coached students through hours of making and decorating their own atlatls and darts, which included straightening dart shafts, fletching the darts with feathers and adding stone points, carving and attaching stone tuning weights to steady the atlatls before a throw, and decorating and sealing the wood. 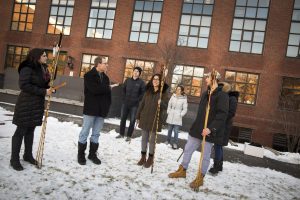 Majewski (second from left) leads the atlatl demonstration outside. 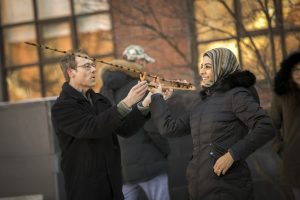 He assists Ph.D. candidate Nancy Khalil as she prepares to throw her atlatl.

Diana Gerberich, a senior social anthropology and archaeology concentrator, said she learned about atlatls in the classroom and was intrigued enough to search the web for more information. Her next idea was to give the device a try, for which she was grateful to work with an experienced guide.

“It was a lot of fun, I was so glad to be actually able to do it,” Gerberich said. “It’s a lot of fun to try to go into other humans’ minds and try to figure out [what] they went through, what sort of behaviors they had to do to get the product they wanted. … You can get a deeper understanding of it because you’re actually doing it yourself.”