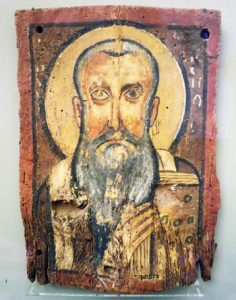 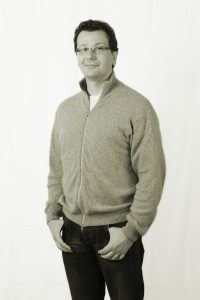 The word “icon” refers to many different things today. For example, we use this word to refer to the small graphic symbols in our software and to powerful cultural figures. Nevertheless, these different meanings retain a connection to the word’s original meaning. “Icon” is Greek for “image” or “painting” and during the medieval era, this meant a religious image on a wooden panel used for prayer and devotion. More specifically, icons came to typify the art of the Orthodox Christian Church.

“Iconoclasm” refers to the destruction of images or hostility toward visual representations in general. More specifically, the word is used for the Iconoclastic Controversy that shook the Byzantine Empire for more than 100 years.

Open hostility toward religious representations began in 726 when Emperor Leo III publicly took a position against icons; this resulted in their removal from churches and their destruction. There had been many previous theological disputes over visual representations, their theological foundations and legitimacy. However, none of these caused the tremendous social, political and cultural upheaval of the Iconoclastic Controversy. 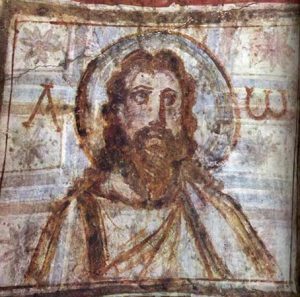 Christ Pantocrator (The Ruler of the Universe), Catacombs of Commodilla, 4th century

Some historians believe that by prohibiting icons, the Emperor sought to integrate Muslim and Jewish populations. Both Muslims and Jews perceived Christian images (that existed from the earliest times of Christianity) as idols and in direct opposition to the Old Testament prohibition of visual representations. The first commandment states,

You shall have no other gods before me. You shall not make for yourself a carved image – any likeness of anything that is in heaven above, or in the earth beneath, or that is in the waters under the earth. You shall not adore them, nor serve them (Exodus 20:3-5).

Another theory suggests that the prohibition was an attempt to restrain the growing wealth and power of the monasteries. They produced the icons and were a primary target of the violence of the Iconoclastic Controversy. Other scholars offer a less political motive, suggesting that the prohibition was primarily religious, an attempt to correct the wayward practice of worshiping images.

The trigger for Leo III’s prohibition may have even been the huge volcanic eruption in 726 in the Aegean Sea interpreted as a sign of God’s anger over the veneration of icons. There is no one simple answer to this complex event. What we do know is that the prohibition essentially caused a civil war which shook the political, social and religious spheres of the empire. The conflict pitted the emperor and certain high church officials (patriarchs, bishops) who supported iconoclasm, against other bishops, lower clergy, laity and monks, who defended the icons. 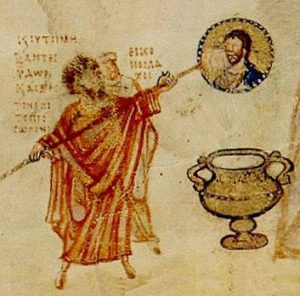 The original theological basis for iconoclasm was fairly weak. Arguments relied mostly on the Old Testament prohibition (quoted above). But it was clear that this prohibition was not absolute since God also instructs how to make three dimensional representations of the Cherubim (heavenly spirits or angels) for the Ark of the Covenant, which is also quoted in the Old Testament, just a couple of chapters after the passage that prohibits images (Exodus 25:18-20).

Emperor Constantine V gave a more nuanced theological rationale for iconoclasm. He claimed that each visual representation of Christ necessarily ends in a heresy since Christ, according to generally accepted Christian dogmas, is simultaneously God and man, united without separation, and any visual depiction of Christ either separates these natures, representing Christ’s humanity alone, or confuses them.

The iconophile (pro-icon) counter-argument was most convincingly articulated by St. John of Damascus and St. Theodore the Studite. They claimed that the iconoclast arguments were simply confused. Images of Christ do not depict natures, being either Divine or human, but a concrete person—Jesus Christ, the incarnate Son of God. They claimed that in Christ the meaning of the Old Testament prohibition is revealed: God prohibited any representation of God (or anything that could be worshiped as a god) because it was impossible to depict the invisible God. Any such representation would thus be an idol, essentially a false representation or false god. But in Christ’s person, God became visible, as a concrete human being, so painting Christ is necessary as a proof that God truly, not seemingly, became man. The fact that one can depict Christ witnesses God’s incarnation. 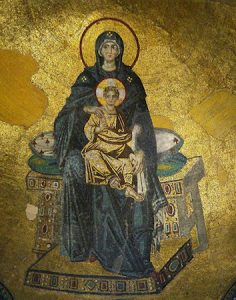 The first phase of iconoclasm ended in 787, when the Seventh Ecumenical (universal) Council of bishops met in Nicaea. This council affirmed the view of the iconophiles, ordering all right-believing (orthodox) Christians to respect holy icons, prohibiting at the same time their adoration as idolatry. Emperor Leo V initiated a second period of iconoclasm in 814, but in 843, Empress Theodora proclaimed the restoration of icons and affirmed the decisions of the Seventh Ecumenical council. This event is still celebrated in the Orthodox Church as the “Feast of Orthodoxy.”

The power of icons

The Triumph of Images: Icons, Iconoclasm, and the Incarnation